Report and free highlights as Harry Kane scores his 10th Premier League goal of the season from the spot before Tottenham confirm victory through Heung-Min Son and Toby Alderweireld; Leeds miss chance to enter top half with defeat

Heung-Min Son’s 100th Tottenham goal helped his side return to winning ways as a 3-0 victory over Leeds moved Spurs back into the top four, even though the win was soured by Matt Doherty’s late red card.

Harry Kane put Spurs ahead from the spot just before the half-hour mark after Steven Bergwijn was fouled by Ezgjan Alioski, and moments before half-time Son doubled the lead when he combined yet again with the England striker to stroke past Illan Meslier.

Patrick Bamford was guilty of missing Leeds’ best chance but the visitors created few clear-cut opportunities to worry Hugo Lloris, while at the other end Toby Alderweireld headed in his first goal since July to add Spurs’ third from Ben Davies’ corner.

Tanguy Ndombele and Bergwijn both tested Meslier as Spurs looked to add to their lead but their victory moved them joint third in the Premier League and ahead of Leicester on goal difference, with Doherty’s second bookable offence in injury time the one blot on the hosts’ copybook on an otherwise perfect afternoon.

Perhaps Leeds’ open style of play would provide Jose Mourinho the chance to shake off the “negative” vibes aimed at his side in recent games, but the visitors’ start was unusually organised defensively and Marcelo Bielsa’s side certainly settled the better.

Midway through the opening period they should have tested at least Lloris when Raphinha’s in-swinging cross was nodded over by Bamford, and seven minutes later they found themselves behind from Spurs’ first shot on target of the day.

Bergwijn was caught on the edge of the area by Alioski after he had been turned by the Dutchman, and after a VAR review ruled the offence had occurred just inside the area, Kane stepped up to extend his record of converted penalties to 16 in a row. 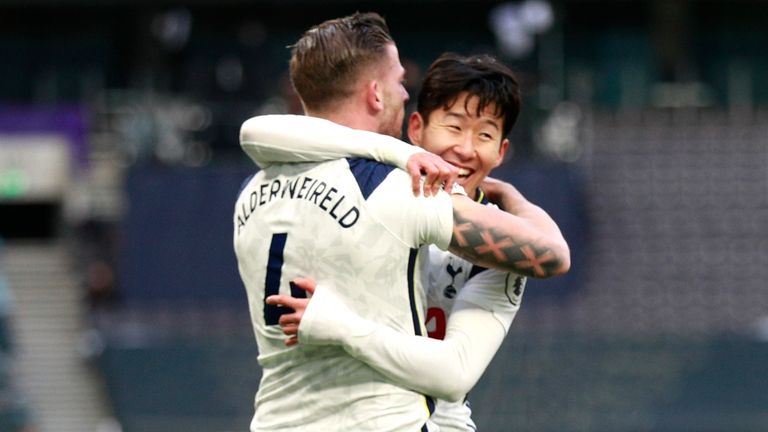 With two minutes of the opening period left, Kane turned provider to tee up Son with a world-class low deep cross to give his strike partner the simple job of tapping beyond Meslier to double the lead.

After half time Leeds continued to play the more attractive football while Tottenham looked more dangerous on the break, and Alderweireld put the game as good as beyond Leeds when his near-post header at Meslier was taken over the line by the goalkeeper’s momentum.

On the hour a perfect first touch from Bergwijn took down Son’s pass before he forced a smart save out of the Leeds goalkeeper, before Meslier dealt just as well with Kane’s ambitious effort from a tight angle.

Doherty gave Mourinho something to be angry about in added time when a poorly timed lunge on Ian Poveda earned him a second booking, but otherwise he could only be pleased as Tottenham picked up a first win in five games.