Sevilla star Diego Carlos is reportedly a top target for Tottenham in the transfer window and they have a plan to try and reach an agreement with Sevilla. Jose Mourinho appears to be growing frustrated with his current centre-back options at Tottenham.

Eric Dier and Toby Alderweireld had been Mourinho’s preferred options in defence at the start of the season.

But a series of errors has led to the Spurs boss chopping and changing with Joe Rodon and Davinson Sanchez coming in.

The Colombia international had fallen out of favour with Mourinho in the beginning of the campaign but he’s since started in all of Tottenham’s last nine Premier League games.

However, Sanchez came under fire at the weekend for his role in the club’s 2-2 draw against Newcastle. 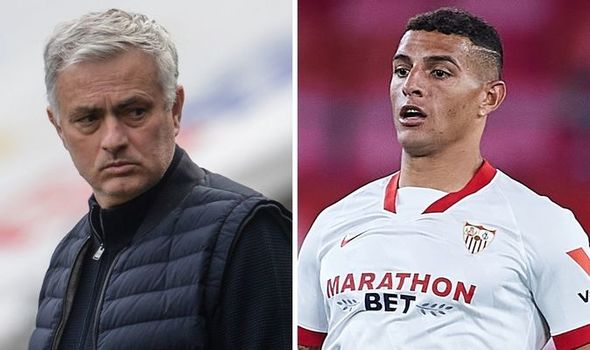 The 24-year-old was guilty of being at fault for Newcastle’s opener, adding further doubts on his future at the club.

Tottenham’s defensive frailties have led to suggestions that at least one centre-back will be signed this summer.

And it appears as though Spurs have switched their attention away from Skriniar for this upcoming summer.

According to Spanish newspaper La Razon, Tottenham are hoping to land Sevilla’s Carlos in the transfer window.

The main issue for Tottenham is the Brazilian’s release clause – set at £64million.

However, Spurs may well be able to negotiate down that fee due to Sevilla’s reported interest in Sanchez.

It is suggested that Sevilla may well be willing to negotiate on the fee for Carlos with the hope of landing Sanchez.

The La Liga outfit also have concerns that Jules Kounde could leave this summer, who is attracting attention from Manchester United and other clubs around Europe.

If Kounde does leave, then Sanchez appears to be Sevilla’s No 1 option and Totttenham may well use that to their advantage in also trying to prise Carlos away.

The 28-year-old has established himself as one of the best central defenders in the Spanish top flight over the past few seasons.

And his performances at the back have played a huge part in Sevilla climbing into the top four this season, just eight points behind league leaders Atletico Madrid.