Tottenham Hotspur bounced back from their shocking Europa League elimination in style on Sunday by beating Aston Villa 2-0 to keep alive their chances of finishing in the Premier League top four.

Spurs’ 2-0 first-leg lead was erased by Dinamo Zagreb earlier in the week as Jose Mourinho’s side lost 3-2 on aggregate in the round of 16, seeing the under-fire coach call into question his players’ attitude and professionalism.

Their Europa League exit means they can only qualify for next season’s Champions League through their league finish, and goals from Carlos Vinicius and Harry Kane moved them to within three points of fourth-placed Chelsea.

It was the first time Kane and Vinicius started together and they both delivered, the Benfica loanee scoring his first Premier League goal in the first half and Kane adding a second-half penalty.

For all the negativity brought about by Thursday’s loss, which included captain Hugo Lloris speaking of a broken dressing room, they are very much in contention for Champions League qualification and still have a Carabao Cup final to come next month.

Villa’s season, however, is dwindling to a limp end as a run of no wins in four games looks like restricting them to a mid-table finish after they had threatened an assault on the top six earlier in the campaign.

Mourinho made a statement with his team selection, responding to two disappointing results by making changes and also including 16-year-olds Dane Scarlett and Alfie Devine on the bench.

It was a bright start from the visitors and they enjoyed some promising moments down the left, yet could not find the quality in the final moment. Villa came into the game and looked threatening, which made the timing of Tottenham’s 29th-minute opener perfect for Mourinho.

Vinicius chased down a long ball, prompting on-rushing goalkeeper Emiliano Martinez into a poor clearance that fell straight to Lucas Moura. The Brazilian played a one-two with Kane and then rolled the ball across the face of goal to give his compatriot the easiest of tap-ins and his first league goal in just his second start. 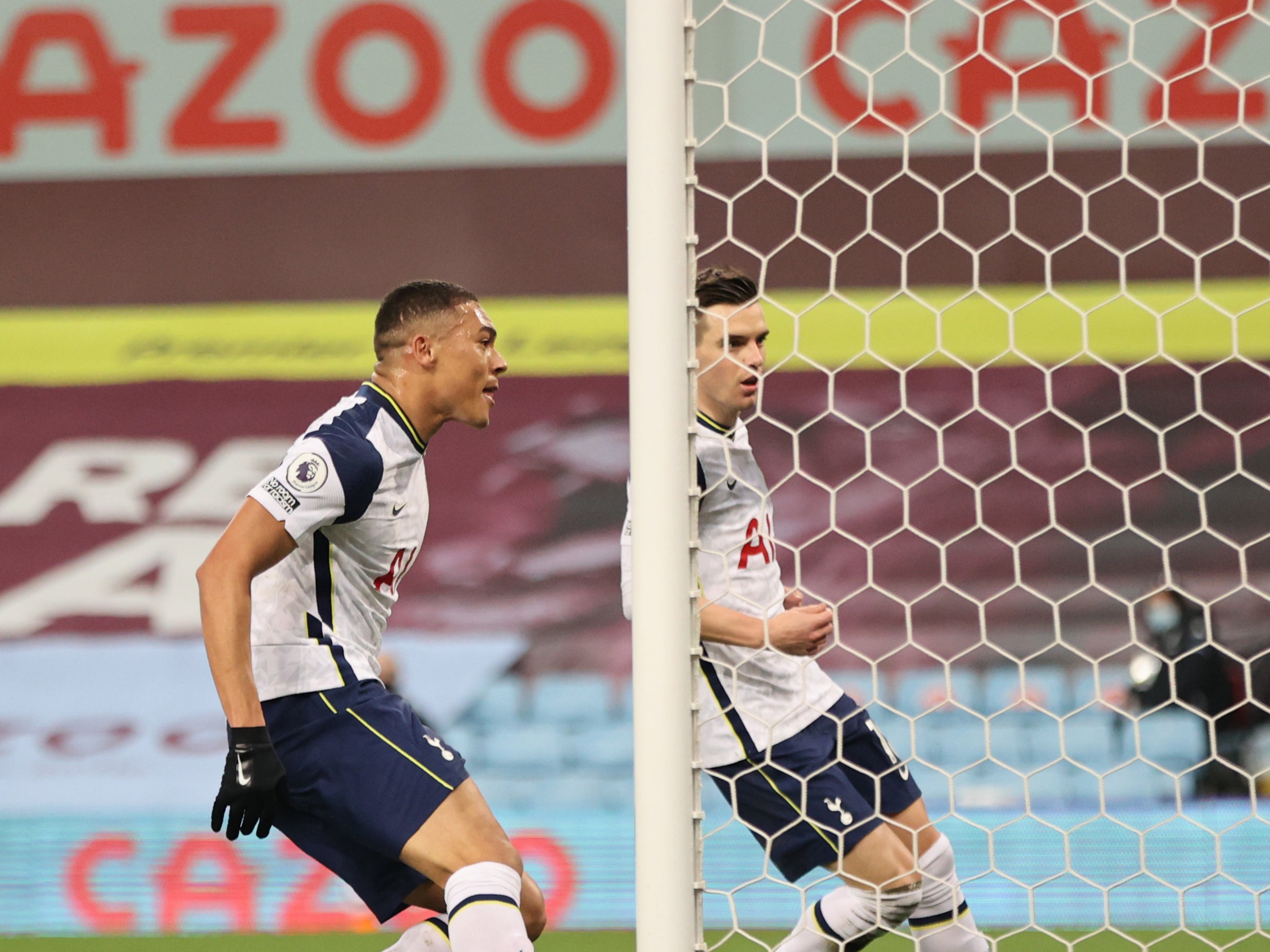 Spurs have had the tendency to retreat in games where they have taken the lead – often to their cost – but they came out in the second half trying to find another goal.

Kane saw a deflected effort from the edge of the area flash just wide while a sauntering run from the impressive Moura looked like ending in a goal until his pull back to Kane was cut out.

Villa have struggled to create in the absence of Jack Grealish and had to wait until just before the hour before they had a shot on target as Joe Rodon made an important clearance from Trezeguet’s effort. That proved a vital moment as midway through the second half Spurs doubled their lead.

Kane did well to draw a foul out of Matty Cash on the byline and the outcome from the penalty spot was predictable as Kane clinically converted his 17th goal of the season.

Spurs threatened to add a third as Pierre-Emile Hojbjerg brought a fine save out of Martinez, while they also wasted good chances on the break.

They eventually had some defending to do in the final 10 minutes and stepped up as Japhet Tanganga produced a fine block from Ollie Watkins.