Tottenham will be looking to send a message to the rest of the Premier League that they are major players in this season’s Premier League title race by beating Manchester City on home soil this evening.

Spurs came into the weekend second, one point behind leaders Leicester, but Jose Mourinho – who recently celebrated 12 months of being Spurs manager – said: “The result of the game will not change anything, only three points more or three points less.

“And being first, second, third or fourth fifth or sixth in the table. But in terms of journey, our ambition, our project, our process, it’s not going to change.

“In our case, we are just at the beginning of a journey, one year – and a special year – not even a year where you follow the same normality of the number of training sessions, calendar and fixtures.

“Everything is so strange that I even find it difficult to believe it is one year. We are in the beginning of that journey, Liverpool took five years to make it happen, City have been on it for 10 years, Chelsea for 20. 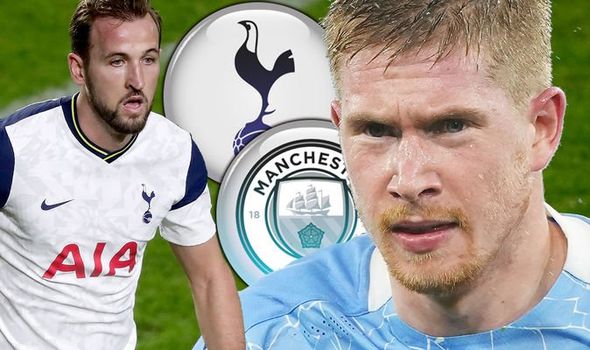 “We are just in the beginning so we are far from perfection, we are far from me being happy, we are not a perfect team. We are a better team than we were, we have the mentality of going into every match always positive and saying we can win that match – we have a long way to go.

“We are playing much better than we were last season but we have a long way to go.”

And City boss Pep Guardiola, fresh from signing a new contract with the Citizens this week, insists he sees Spurs as challengers in the title hunt.

“The numbers speak for themselves,” he said. “They dropped points against Newcastle and West Ham in the last minute, so they could have four more points.

“They are contenders, the quality they’ve got is always there.

“They were in the final of the Champions League, they’ve been exceptional for four or five years, they have a fantastic squad.”

Offering his verdict on Mourinho’s 12 months as Spurs boss, Guardiola said: “Really good, as always in all the clubs [he has been at].”