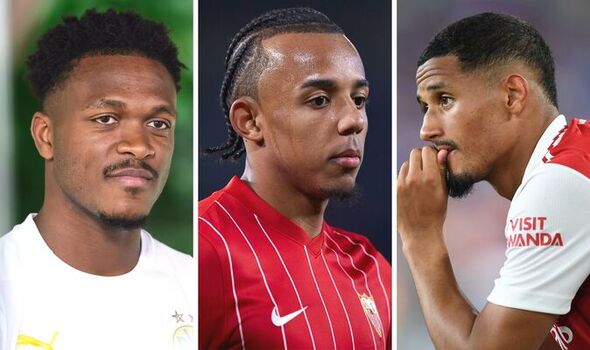 Manchester United, Chelsea and Arsenal all remain heavily active in the summer transfer market as Premier League clubs look to scramble some new signings over the line before the start of the upcoming 2022/23 campaign. Meanwhile, in Spain, Barcelona continue to dip their hands into their never-ending pot of money following their lucrative £239m Spotify sponsorship deal and Express Sport has you covered with all the latest gossip and done deals on Thursday, July 21.

The Athletic have exclusively revealed that Manchester City have seen an opening £30m offer rejected by Brighton for Marc Cucurella.

The flying Spaniard is the next name on Pep Guardiola’s shopping list after the Premier League champions sanctioned the £32m sale of Oleksandr Zinchenko to Arsenal.

Yet Brighton are not the kind of club to crack during negotiations and the Seagulls are set to ask for at least £50m before they even consider selling their full-back.

Brighton have also opened talks with Cucurella over a new contract but the marauding wing-back is expected to push for a move to the Etihad.

Express Sport’s Ryan Taylor understands that an unnamed Premier League club is currently in the running to sign Austrian international midfielder Florian Grillitsch, who is a free agent following expiry of Hoffenheim contract.

An official offer has been tabled and is under consideration.

Galatasaray, Trabzonspor and Besiktas are also in mix alongside clubs from Germany and Italy after Grillitsch’s Fiorentina move collapsed at the final hour.

La Viola’s sports director Daniele Prade recently revealed the player’s father and representative was the reason the deal broke down.

“Grillitsch is a player we’ve been following for a long time and since he’s a free transfer player we were interested in him,” Prade said.

“We didn’t like the father’s talk and the payments he was demanding. We choose who we work with, and it’s not true that we argue with everyone. We’re a club liked by agents because we always pay on time. However, we cannot always pay more commissions than others.”

Barcelona could be set to move for Arsenal defender William Saliba if they miss out on Jules Kounde, according to Gerard Romero.

The Sevilla stalwart’s French international teammate is of real interest to Barca, who could make their move if Chelsea beat them to top defensive target Kounde.

Barca have allegedly had ‘very good reports’ on Saliba – that go way back – therefore, he could be a real option if the Catalan giants don’t sign Kounde.

Arsenal boss Mikel Arteta is expected to hand Saliba a new contract after impressing in pre-season on his return from a loan spell with Marseille.

Chelsea have upped their offer to £55m for Sevilla centre-back Jules Kounde.

That’s according to transfer king Fabrizio Romano, who says the Blues are looking to close a deal with the Andalusian club.

Barcelona are also in the mix for the 23-year-old, who looks almost certain to leave Sevilla before the start of the 2022/23 season.

“Kounde, still in direct talks with both Chelsea and Barcelona on personal terms – while clubs are discussing on details.”

The centre-back is a free agent after leaving the Bundesliga giants upon the expiry of his contract but he is yet to find a new club.

Marseille are also seemingly in the mix but as of now, Zagadou’s future is understood to be a straight shootout between United and Inter.

The Serie A club have already made the player an offer via his representatives.

I’m Ryan Taylor and I’ll be keeping you up to date with all the latest until around 3pm, when one of my esteemed colleagues will be taking over until 11pm…