Tony Gustavsson has appealed for worried Matildas fans to “trust in the process” amid their shaky form as his players prepare for a dress rehearsal of next year’s Women’s World Cup opener at the rebuilt Allianz Stadium.

The Swede is hopeful the shiny new venue at Moore Park can conjure something from within his team, after they produced on Monday what he said was one of their “most energetic” training sessions in some time ahead of their rematch with Canada on Tuesday night. 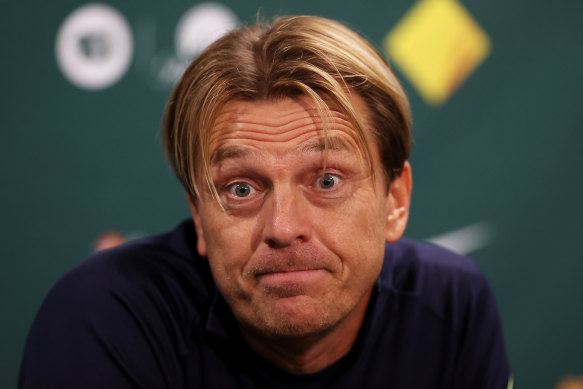 Tony Gustavsson admits he needs a win to please his external critics, but says he is on safe ground with Football Australia regarding his job.Credit:Getty

Skipper Sam Kerr and her teammates will return to Sydney’s new sporting jewel on July 20, 2023 to begin their home World Cup campaign, but there is rising concern about whether the Matildas will be ready to mount a realistic challenge for the trophy and whether Gustavsson is the right man to steer them on that journey.

Saturday afternoon’s 1-0 defeat to Canada in Brisbane was Australia’s 12th loss from Gustavsson’s 25 games at the helm, to go with just eight victories – giving him the worst winning record of any coach in the past 20 years. However, he still has the clear backing of Football Australia to continue in the role.

Asked what he would tell supporters who are feeling nervous about the Matildas’ current trajectory, Gustavsson admitted he might have bitten off more than he could chew in the early part of his tenure, when he was attempting to build greater squad depth while also guiding the team through a tough schedule against top-ranked nations to expose them to the calibre of teams they’ll need to beat to win the World Cup.

Only one of their wins so far under Gustavsson has come against a top-20 opponent, from 17 attempts. 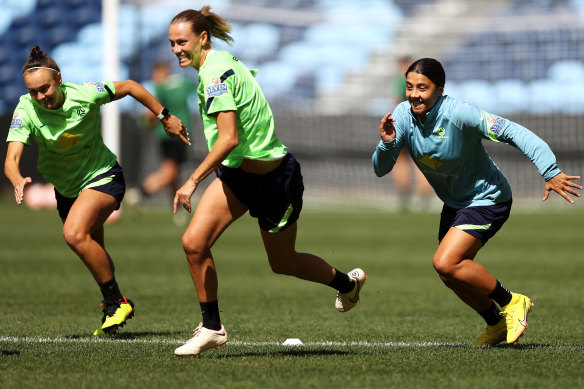 “It might be unfair to ask for trust in the process. But I understand what it’s like, I do,” he said. “I’ve been there on the other side, as well, and when you want to see what’s happening on the inside, and you want to see those results.

“I’d say as well that it’s important to look at the whole picture and see what we’ve tried to do. Maybe I can look at a mirror sometimes and say, ‘was I over ambitious, trying to build depth in the roster at the same time as playing the toughest schedule in the history of this program?’

“Maybe that wasn’t best for the belief and trust from the outside. But I was very clear with the federation and with the players what we were doing. Internally, the patience is there, the trust is there, the belief is there. But externally? I understand the question, I do. And it’s fair.

“I can also learn. And if I were 10 or 15 years earlier in my career, I think maybe I would have made a couple of different decisions to protect myself, play some easy opponent, get some popularity, and buy some time as a coach – you know, classic, that some coaches do.”

There were glimpses of promise shown in Brisbane but the same old problems – sloppy defence, a malfunctioning midfield, and wasted chances up front – continued to dog the Matildas in critical moments, while they are yet to form a consistent and clear on-field identity.

At least they appear set to regain Steph Catley and Caitlin Foord, who Gustavsson said trained strongly but won’t be medically cleared to play until Tuesday due to soft tissue concerns. Defender Alanna Kennedy will miss after suffering a hamstring injury.

“By the way, what a stadium – wow. I can’t picture what it’s going to be like an opening game in the World Cup,” Gustavsson said.

“We actually gathered the team out there on the pitch after [training] to take a picture – to kind of say, hey, let’s fly in time here, and picture this as the 19th of July, the day before the World Cup opening game and get that feeling and that vibe. I think something happened in the players today when they came to the stadium, because this is one of the most energetic trainings we’ve had in a while.

“If we can bring that type of energy, I’m excited about the game.”