A bitter turf war has broken out between the three Melbourne A-League clubs over the use of AAMI Park just weeks before the new season is due to kick off.

Western United, who are entering their second season, want to play six matches at the stadium. 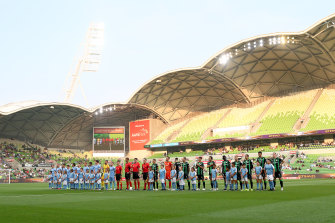 Western United want to play more games at AAMI Park but are being blocked by City and Victory.Credit:Getty Images

"We are looking to build our own stadium and that won't be ready for a couple of years.

"We had planned to play matches closer to the city so that our supporters who live over the Westgate Bridge but in metropolitan Melbourne could get to the games, but the work required to upgrade some of the grounds we were looking at makes that a financially difficult proposition.

"AAMI is the right capacity where we could socially distance supporters and the infrastructure is there. It's a government-built stadium whose construction was financed by the taxpayer, we are a Victorian club, so I can't see how it can be opposed if it is just a short-term measure."

Neither Victory nor City would comment on what is looming as an embarrassing territorial dispute just weeks from a new campaign.

The clubs have recently taken control of the A-League from Football Federation Australia – the end of a two year "unbundling" process which, in theory, will allow them to act collectively to add value to their franchises, attract outside investors and boost popularity with crowds and potential media partners.

"It's not what we expected when we set out to run the competition to grow the game, with all the clubs working together," Pehlivanis said.

Western played the bulk of their games in their first season at Geelong's GMHBA Stadium but crowds were poor and interest less than they would have hoped for.

They still plan to play some matches – a minimum of four – at GMHBA Stadium and a minimum of two at Ballarat's Mars Stadium in a bid to "roadshow" the club and build a non-metropolitan fan base in Victoria's western region.

“We listened to our members during the off season and the feedback was consistent – bring some home games to the west of Melbourne. However it’s a tougher year than most to plan," Pehlivanis said.

“The challenges the pandemic presents for live sport – the restrictions on capacity and providing a COVID-safe environment made determination of the 2020-21 home ground strategy an unenviable task.

"The best way we can have the most fans together safely enjoying live football is to play at the safest and most professional stadiums possible that will be leaders in implementing health and safety protocols.

“We’re working hard with the Victorian government, venue operators, and the FFA to secure a venue for our home games in Melbourne,” Pehlivanis added.

Victory and City did not oppose Western's inclusion in the league last year because their strategy was to develop soccer in regions outside Victory and City's catchment zone – not in the heartland of the other two clubs.

They privately argue that Sydney FC have not moved into rival club stadia while the Sydney Football Stadium is being rebuilt but found other solutions, and that Western should do the same.