VIEW FROM ITALY: The Azzurri are inspired by a rock-hard defence, Barella becoming the new Kante and the stylish Mancini’s religious visions… but we will NOT say they will win Euro 2020 – it’s bad luck!

Can Italy win the Euros after 52 years of waiting? This is the recurring question these days, especially in Italy where it is forbidden to talk about winning the competition due to superstition.

But it is possible to continue dreaming after the Azzurri’s victory against Belgium. There are many reasons and possibilities to finally see Italy triumph in the tournament after so many years of waiting.

Roberto Mancini’s side are performing superbly given their rawness at international level: none of the players called up by the Italy boss, with the exception of Leonardo Bonucci, Jorginho, Marco Verratti and Giorgio Chiellini, have ever won a major trophy at club or international level. 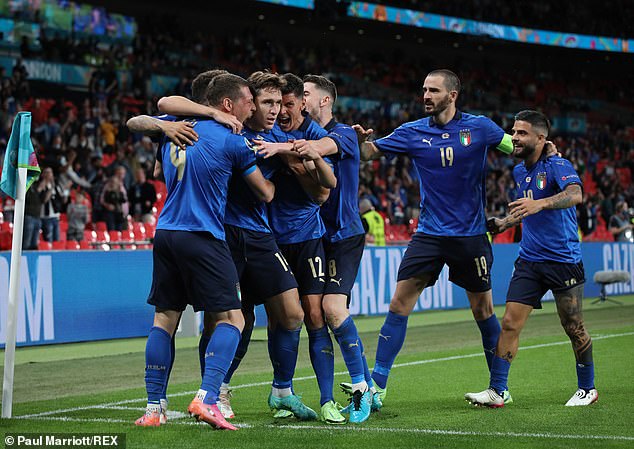 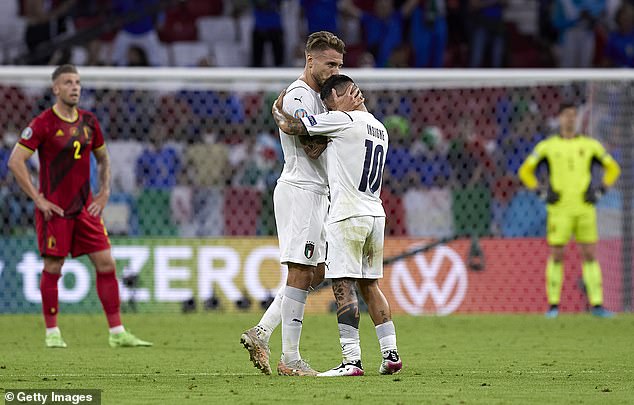 Meanwhile, 24 out of the 26 players have never participated in a major tournament before and many players like Nicolo Barella, a positive revelation at Euro 2020, are on their first great international adventure with the Italian national team.

Ahead of Tuesday night’s do-or-die semi-final with Spain on Tuesday night, these are the key characteristics of Mancini’s men…

While there are several new faces in this Azzurri side, this Mancini team has a very traditional element to it: a rock-hard defence.

Italy have only conceded twice in this European Championship so far and none of them from open play. 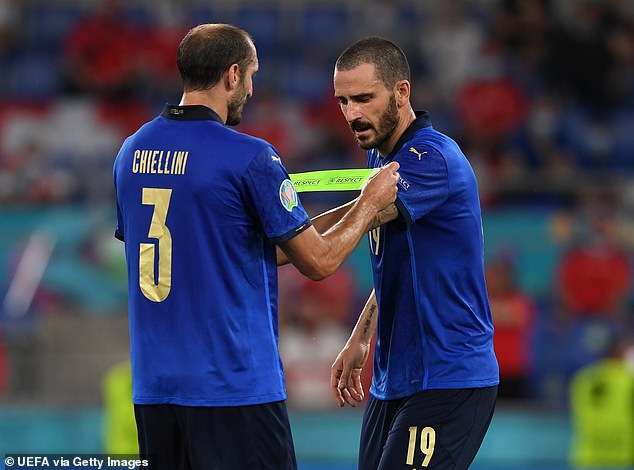 At the heart of their backline is the legendary centre-back duo of Bonucci and Chiellini, who have been described by Bastian Schweinsteiger and Alan Shearer as the best defensive tandem in Europe.

The pair have been playing together for 11 years and know all of the best defensive moves by heart, thereby making Italy’s defense watertight.

Italy captain Chiellini revealed that his relationship with Bonucci is on the verge of telepathic but also paid tribute to the other defenders available in the squad.

He told a pre-match press conference: ‘Bonucci and I have been playing together for many years and it is normal that we have a special feeling. 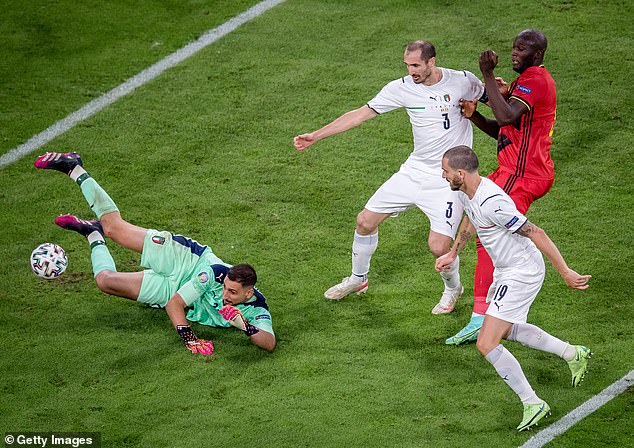 The duo’s relationship is telepathic, with keeper Gianluigi Donnarumma (left) impressing too

‘We don’t even need to look each other in the eyes to understand what to do. But the other defenders are also strong. (Francesco) Acerbi has always played well, (Rafael) Toloi, even (Alessandro) Bastoni, (Giovanni) Di Lorenzo is strong. We are a proper group.’

Meanwhile, (Gianluigi) Donnarumma has finally become a defence leader in goal and is making his vocal presence known on the pitch.

After six years as a starter at AC Milan, his experience in Serie A has been fundamental and his displays at the European Championships so far show that Paris Saint-Germain have signed the best goalkeeper under the age of 23 in the world.

Andrea Bocelli started the Euros with a passionate rendition of ‘Nessun Dorma’ but this Italian side has three tenors itself – Verratti, Jorginho and Barella.

The trio’s strengths are clear: they run, fight and above all they contribute to the attack with direct, vertical passes capable of breaking through the lines and putting any kind of defence in difficulty. 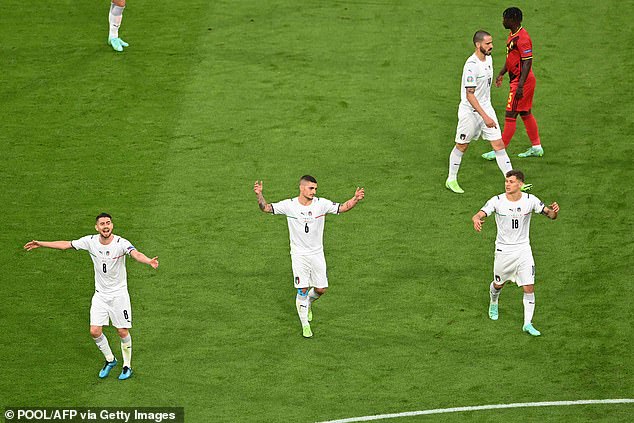 Verratti has finally managed to find the best role for his qualities, playing as a hybrid winger in order to free up more space for Jorginho, fresh off the back of a Champions League final victory with Chelsea.

Barella, meanwhile, is a modern midfielder who knows how to give assists and protect the ball from his opponents using dynamism and strength, who can run constantly for 90 minutes.

The Inter Milan midfielder is the nucleus of a brand new midfield that is more harmonious than in recent history – despite the likes of Andrea Pirlo, Daniele De Rossi and Thiago Motta retiring from international duty in recent years.

Barella is set to be a big name on the international stage and Inter are now trying to hurry him towards a new five-year contract – with the 24-year-old billed as a potential captain of the club in the future. 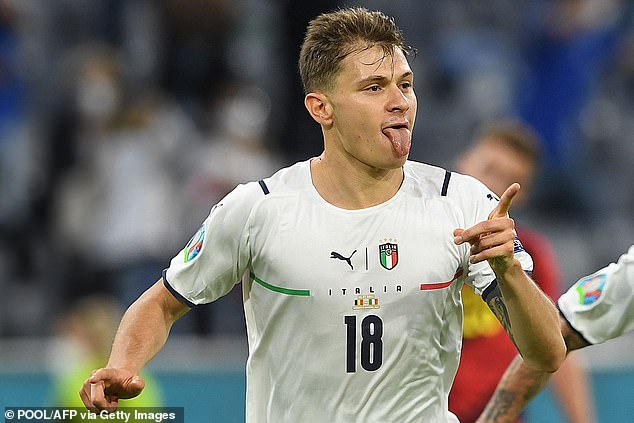 There is good reason for that too, the midfielder has been compared to N’Golo Kante and his performances so far this summer have hinted that he can usurp the Frenchman as Europe’s top midfielder in the future.

Lorenzo Insigne has become a fundamental player for Italy and his extraordinary goal against Belgium demonstrates how Italy’s No 10 is his country’s big-game player.

His way of cutting in from the right is very similar to that of Alessandro Del Piero, while his running style can also be compared to the former Juventus No 10. 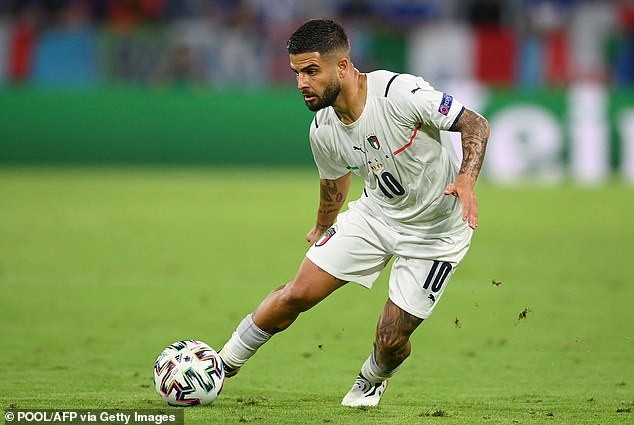 Insigne has come from the depths of despair at both club and international level. As a young man he was considered too short to be included at the top club level, and while he was a good dribbler he lacked the right physique.

The winger was rejected by Inter and Torino and, while he was snapped by Napoli, he was sent out on loan to Italian minnows Foggia. After that negative experience he returned home to Naples and has been a starter ever since.

Years later, when the Azzurri failed to qualify for the 2018 World Cup, the Napoli talisman was bizarrely named as an unused substitute by disgraced coach Gian Piero Ventura for their crucial qualifying tie against Sweden.

During the defeat, De Rossi bellowed to the Azzurri manager from the substitutes’ bench: ‘Put him on the field! We have to win, put Insigne on!’ 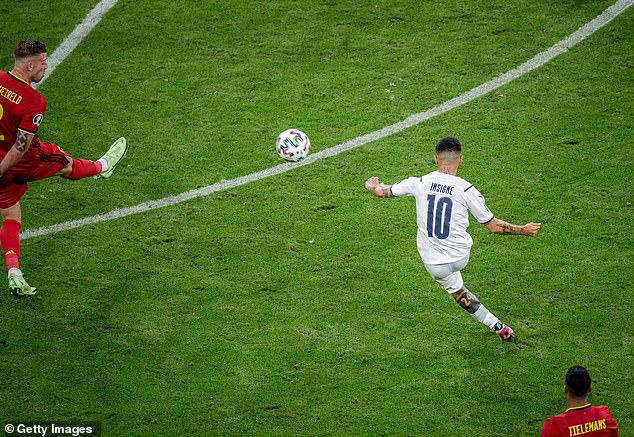 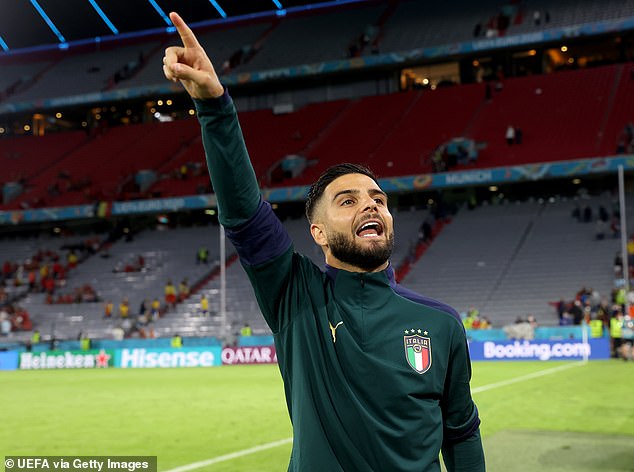 But his goal against Belgium last week has erased the memory from that absurd episode, along with the tagline of being unselectable, unreliable and Italy’s Plan B at  best.

Now he is one of Mancini’s key men and has become fundamental to Italy. Despite being 30 years old, he will be the blue No 10 for many years.

No matter what happens over the next week, Mancini will be remembered as one of the greatest coaches to have managed Italy at European Championships.

The 56-year-old is a magician – and not just tactically. His young face evens makes his grey Italy suits – described as pyjamas by the Italian media – appear elegant. 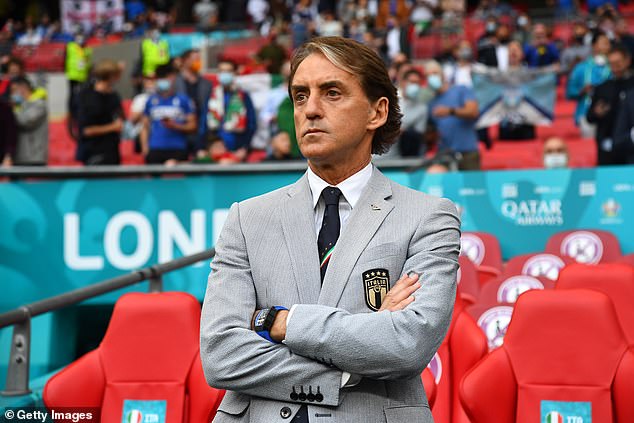 Mancini is the classic middle-aged Italian man who loves fashion and the world it belongs to: his clothing is always impeccable – a real contrast to the way other Italian managers present themselves, such as Maurizio Sarri, who often wears tracksuits.

The Italy boss is a man for every situation. He can joke with the players but also knows when to have a go at them, while he always says the right thing in front of the press.

Through his training sessions and motivation skills, Mancini is transforming standard players into potential champions – the likes of Domenico Berardi, Toloi, Manuel Locatelli, Matteo Pessina and Federico Bernardeschi in this tournament.

The former Manchester City boss has turned water into wine during his time as Italy coach but the 56-year-old speaks regularly about how he was enlightened by religion during his playing days. 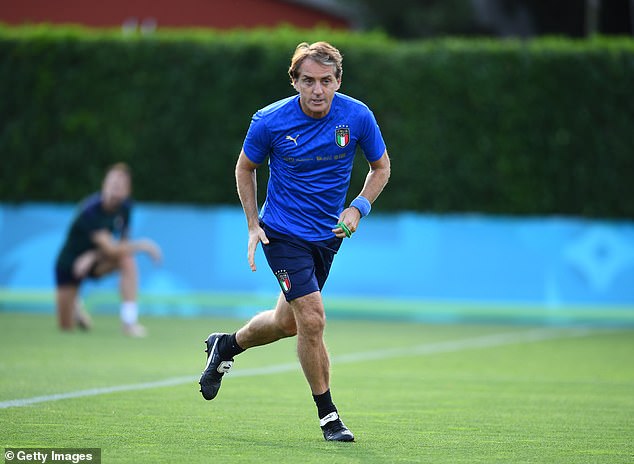 The deeply religious head coach spoke about how the Bosnian vision of the Virgin Mary – Our Lady of Medjugorje – occasionally comes to speak to him during his sleep.

‘I am religious like many people in Italy, I was lucky enough to grow up near a church, which helped me grow up. An hour spent at Mass is better than the others.

‘Our parish priest in Genoa told me about Medjugorje many years ago, when I was playing for Sampdoria. Then, Our Lady appeared to me in a dream… I have absolutely no idea what happened. I don’t know, it was really weird. 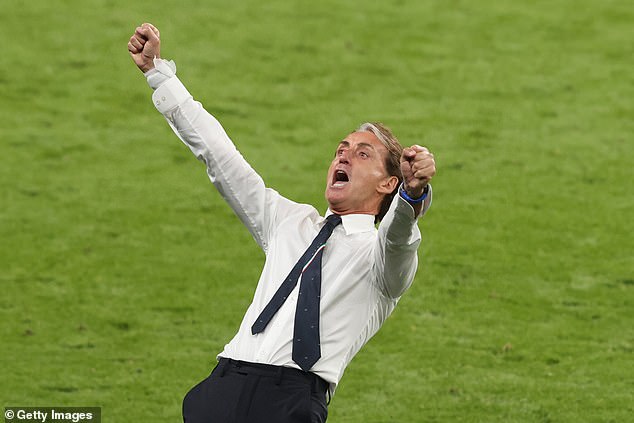 ‘So I went and also told him. We have spoken to each other several times… I understand that there may be people who do not believe this but I believe that the thought must be respected.’

There’s no miracle needed for Italy to win this summer’s Euro 2020 – Mancini’s men have proved they are worthy contenders ever since the first ball was kicked at the tournament.