‘It’s better than staying at home’: Vinicius Junior reveals why he asked to play for Real Madrid’s B-team

Brazilian wonderkid Vinicius Junior finally made his move to Real Madrid in the summer, but has since only played 12 minutes of football for the first team.

He’s spent most of the weeks playing for Castella, Real Madrid’s B-team, although he has revealed that it was partly his decision.

The 18-year-old says he would rather be playing there than playing no football at all. 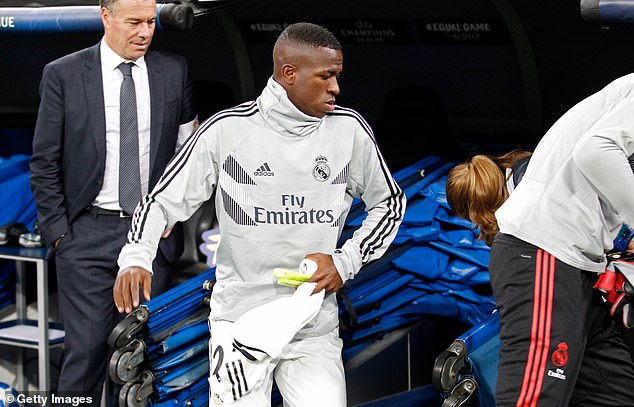 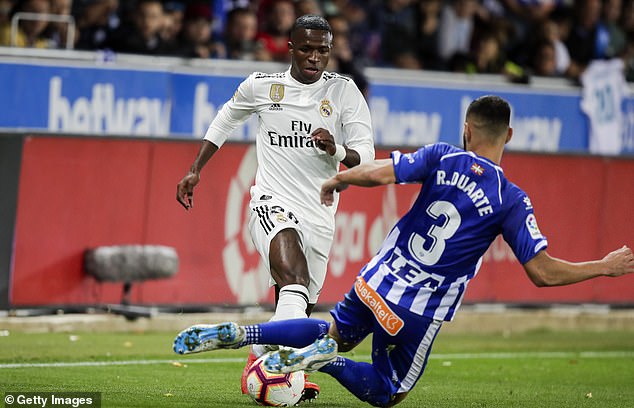 He’s played just 12 minutes for the first team, but has performed well for the B-team Castella

‘I did pre-season with the first team aware that I could end up playing with the B-team,’ he said, according to Marca.

‘I asked to play there if I wasn’t going to be considered because it’s better than staying at home.

So far this season, Vinicius Junior has been a substitute in two games for the first team. He played 10 minutes in Real Madrid’s 1-0 defeat to Deportivo Alaves, and just two minutes in their 0-0 draw with Atletico in the Madrid derby.

He also sat on the bench for the 2-0 win over Getafe and the 3-0 defeat to Sevilla.

He has played five times for the second team though, which competes in the Segunda Division B. He’s scored four times and also provided one assist, and, given his performances, could be eyeing a step up to the first team.

He scored a superbly struck free kick during the game and created several opportunities for his team-mates.

There was a worry that Vinicius Junior would not be available for El Clasico this weekend thanks to a suspension following a red card against Celta Vigo B.

However, Marca reports that after a first appeal was rejected, a committee has now accepted the appeal of Real Madrid and withdrawn the sanction after his second yellow card.

A second appeal from Real Madrid may suggest that the club are keen for his services.

Real Madrid are struggling as of late, with a narrow win over Viktoria Plzen in the Champions League a brief reprieve for manager Julen Lopetegui after five games without a win.

If a match as important as El Clasico is seen as too much for the youngster, a selection for the Copa del Rey match against Melilla next week could be a good opportunity for Vinicius Junior to get some more time with the first team.

Or, if the Real Madrid boss is facing the sack, a new manager might decide Vinicius Junior’s skills are exactly what the team needs to get back on track.