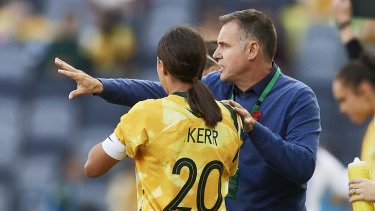 "I have been in Europe for the last couple of years and … I have seen what they have invested," Milicic told reporters in Adelaide on Monday.

"And now, that is the challenge for us.

"With the [Australian pay] agreement that has been put in place, we know now that it's a serious sport.

"But now it's for us to build on that W-League. We need more games, we need more coaches available, we need better facilities.

"So we need to expand on that if we want to continue because, to be perfectly honest, particularly Europe is really, really moving forward at a quick rate.

"And if we don't address these [issues], I think it's going to be difficult in the years to come."

Matildas star Sam Kerr will not be returning to the W-League this season and is expected to announce a move to a European club shortly.

Kerr has spent the past six years playing non-stop in both the Australian and in the United States' summers.

She was a marquee player and was paid out of the FFA's marquee fund last season.

But while her departure will be a blow for the Australian competition, Kerr's Matildas teammate Lydia Williams said Kerr's impending move to Europe could help the Matildas to win medals.

"We want to continue to grow the W-League, but we also want our best players to play in the best competition they can to better themselves," Williams told RSN radio.

"Sam has been going back-to-back for quite a number of years, so now she's decided to go on to another challenge, which is great for her and helps our national team.

"Obviously we would love to see her back in Australia, but at the end of the day, we want to win medals for the national team. Whatever we need to do to do that, that's the focus."

The Matildas downed Chile on Saturday in Parramatta before 20,029 spectators – a record for a women's international in Australia. The second and final game in the series will be held in Adelaide on Tuesday night.

England at the weekend set its own crowd record for a women’s home international when 77,768 people attended a friendly against Germany.

Australia's W-League kicks off this Thursday, with the nine teams playing 14 rounds before finals.

Milicic said it was vital the domestic league improved – a lesson borne out at the World Cup in June and July this year, when the Matildas exited at the round of 16 stage.

"When you look at the World Cup … the girls that aren't in a professional environment or aren't playing where they are getting games at a high level of intensity, it jumps too big," he said.

"So we have to find ways together if we're going to narrow the gap.

"That is the challenge for us and that is where we have to get to.

"And if we qualify for the [2020 Tokyo] Olympics, that is what is waiting for us in an August month. So we need to really have a focus on that."

Milicic said Kerr's capacity to perform for the Matildas amid the transfer scrutiny was praiseworthy.

"It has been a big week for Sam, not only as an individual and the captain of her country, but also the whole team.

"There has been a lot of expectations around the team … and the team understand that we need to deliver on the field."

Kerr will again take centre stage, in Adelaide on Tuesday, when Australia hosts Chile in a second friendly – the first time the Matildas have played in the South Australian capital in 13 years.

"I'm sure Sam and the rest of the girls are looking to finish Tuesday night's game in the best possible way," Milicic said.