Home » Soccer » ‘We were dragged in’: The club Bill Papas left in lurch is fighting for pride

This was supposed to be a huge season for Sydney Olympic FC. The club’s chairman, Bill Papas, had just bought Greek second-division outfit Xanthi FC and installed former Socceroo Tony Popovic as coach.

Papas wanted to create a formal link between the two clubs, which he hoped would expose a few talented Sydney Olympic juniors to higher-level European competition – once Popovic had guided Xanthi to the summit of Greek football and started qualifying for UEFA tournaments, as planned. Papas even changed Olympic’s away kit to the same red and white stripes as Xanthi’s home uniform to reflect the partnership. 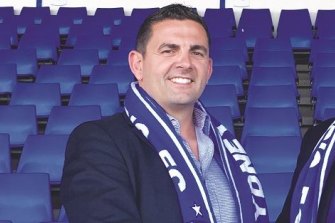 It all made sense, and on face value, it sounded pretty promising.

Then the sky started falling in. The first rumblings that something wasn’t quite right in Papas’ soccer empire came in February, when Popovic was sacked. It was sudden. His assistant, ex-Socceroos teammate Zeljko Kalac, later claimed they had been “sabotaged” and said the situation was “disgraceful”. The full story of what really happened at Xanthi is yet to be told.

The COVID delta strain came next. The outbreak in Sydney forced the cancellation of the NSW NPL season – the second year running where the pandemic has severely hampered the state’s top football league and damaged clubs financially. Sydney Olympic were in fifth position, with seven wins from 17, when it happened.

Exactly two weeks after their last game, it got worse. When Westpac filed court proceedings against Papas’ company Forum Finance over an alleged $200 million fraud, Papas resigned from his role at Olympic on the spot. Last month, the Federal Court issued a warrant for his arrest. It’s believed Papas is still in Greece, and appeared at a Xanthi match as recently as this month. 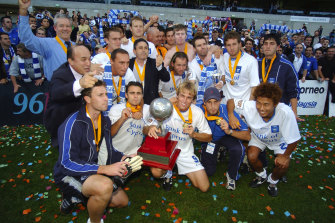 The Olympic Sharks, as they were then known, celebrate their 2002 NSL grand final win over Perth Glory.Credit:Getty

Olympic were left in the lurch. On Wednesday night, they will play their first match since Papas’ resignation in the FFA Cup’s round of 32 against the might of A-League Men powerhouse Sydney FC. It’s an opportunity for the proud ex-National Soccer League club – founded by Greek immigrants in 1957, and crowned champions of Australia in 1990 and 2002 – to restore some pride after a year they’d rather forget, albeit one ruined by no fault of their own.

“The Bill [Papas] saga was certainly a distraction from normal business for us,” said Damon Hanlin, who has succeeded Papas as Olympic’s chairman, and has been lauded by club figures for his role in keeping them afloat amid the chaos.

“It caught me off guard, I won’t lie. It’s been a bit of a battle over the last six months, but we’re clear again. The main issue was getting confidence back from the governing body. We needed to appease Football NSW that there was nothing to see, or no underhandedness from the club itself, that the club was in fact cleanskin. We were dragged in by association.

“The fans themselves were concerned about where it was going and only understood what was being written about in certain media outlets. But I think the overall support for the club has intensified.”

Whether Olympic are completely out of the woods remains to be seen. According to the Australian Financial Review, the club owed $2.18 million to Papas’ Forum Group, and that outstanding amount now sits with the company’s administrators. Another ex-coach, Terry Palapanis, is preparing to take the club to FIFA over unpaid wages. He would be the second to do so in recent years. Gorka Etxeberria was awarded roughly $80,000 by FIFA in 2019 after winning his case against Olympic. 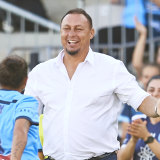 Ante Juric coaches Sydney FC’s A-League Women team in the summer – but in the winter, he’s at the helm of Sydney Olympic.Credit:Getty Images

But if you ask Hanlin, or anyone else associated with Olympic, the future is bright, and whenever Football Australia gets cracking with plans for a national second division beneath the A-League, they’ll be ready to go.

On the field, nothing much has changed. “I wouldn’t even know it happened. That’s how much it impacted us,” coach Ante Juric said. “There’s not even been a ripple. One person’s alleged wrongdoing has got nothing to do with the club – that’s his personal life and business.”

Although Sydney FC and Sydney Olympic have never met at senior level, they’re not exactly strangers. Juric is Sydney FC’s A-League Women coach and his assistant, Tom Whiteside, is also his captain at Olympic.

Sydney FC midfielder Max Burgess played for Olympic in 2018 – his brother, Darcy, still does. Leading the line for Olympic will be another familiar face in Roy O’Donovan, the veteran striker who last played for Newcastle Jets.

Then there’s the philosophical rivalry: Olympic represent a bygone era that ended the moment the A-League began, and franchises like Sydney FC started taking over. It still doesn’t sit well with them, or any other former NSL clubs sidelined by Frank Lowy’s FFA regime.

Ticket sales are tracking well, with several thousand fans expected at Belmore Sports Ground. Olympic are pulling out all the stops: they’ve fired up the grill for a classic Greek barbecue, and have lined up a Greek musician for half-time entertainment.

However, they will be rank outsiders. The FFA Cup was designed to pit state-league teams in peak condition against A-League sides in pre-season, in the hope of engineering “cupsets”. The delay to scheduling, due to the pandemic, means Sydney FC are at full tilt instead.

“Now it’s the other way around – probably the best team in the country at their peak, and we’ve had four weeks of training. It’s not ideal, but it’s an opportunity to do something amazing,” said Juric, who played in Olympic’s 2002 NSL grand final win over Perth Glory.

“This is where we belong. It’s nice to get the club back to where it could be, or should be. If we can somehow jag a result, great. But just the occasion is great for us as well.”

Watch Messi, Neymar, Ronaldo and football’s biggest superstars in the UEFA Champions League with every match streaming ad-free, live and on-demand only on Stan Sport from this Wednesday 15 September.