Home » Soccer » ‘We’ve got the Aussie DNA’: How the Socceroos can pull off mission improbable against France

Doha: The road to glory at this World Cup for the Socceroos, and a biblical upset over France on Wednesday morning (6am AEDT), goes through the games room at the team’s Aspire Academy base. It sounds trivial, but Graham Arnold is convinced.

There are snooker, air hockey and foosball tables. A toaster, loaves of bread and a jar of Vegemite. A PlayStation 5 and a copy of FIFA 23, which features Paris Saint-Germain superstar Kylian Mbappé on the cover. They’ll soon see him in real life. 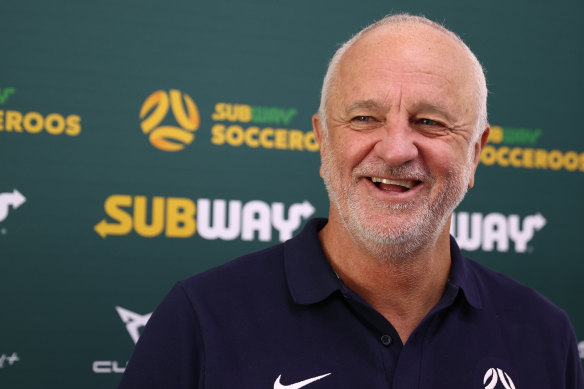 Graham Arnold is banking on team unity to guide the Socceroos to an upset win over France.Credit:Getty

World football has an established order, and when you look at this clash at the Al Janoub Stadium through that lens, Australia doesn’t stand a chance.

But that order, Arnold reckons, will be turned upside down at this tournament given how different it is in every aspect: the mid-season timing, the Middle Eastern heat, the distractions some teams will face in sleeping in the same hotels as fans and navigating Doha’s traffic gridlock on buses before and after training sessions.

Upsets do happen at World Cups, and often at the expense of the defending champions – and that’s before you even contemplate these unique factors.

If nothing else, Arnold is a meticulous planner, and he is working from an already strong base: Qatar is their home away from home, where they took their World Cup qualifiers when they couldn’t play in Australia during COVID. Their all-time record here stands at 10 wins and three draws from 15 games stretching back to 2008. 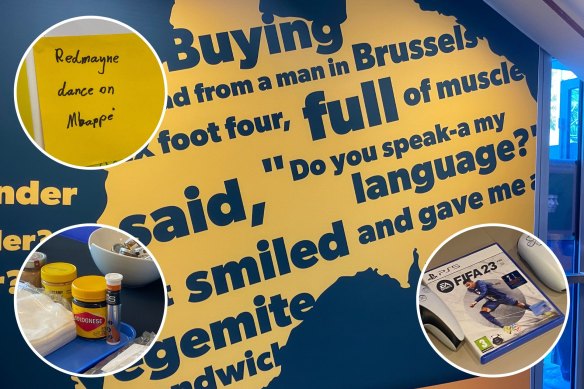 Australia’s Aspire Academy base is filled with little touches of home – and a reminder of the magnitude of their opponents.Credit:Vince Rugari

Aspire, the $1.3 billion facility where Tim Cahill is chief sports officer, gives them another edge. It’s a coach’s paradise. They eat, sleep and train in the same location, secluded from the tournament’s hustle and bustle, and where media can only watch them on the pitch for 15 minutes each session before tactical work begins.

The walls inside are plastered with motivational messages, images of past successes, family photos stuck above players’ beds – and even the lyrics of Men At Work’s ‘Land Down Under’, the Socceroos’ unofficial anthem.

It’s all designed to bring them closer together, and capitalise on Australia’s greatest strength, and perhaps France’s greatest weakness: team unity.

The late withdrawal of Martin Boyle through injury was a curveball they could have done without, but Arnold says their lead-in to the Group D opener has been otherwise note-perfect.

“Our pre-planning that we did for the three months leading into this, to make sure everything was going to be right, has worked extremely well. The players are in great spirits,” he said.

“It’s a completely different environment from where [European teams are] coming from … where the conditions are cold. When they’re coming into the heat, it’s about getting the training times right, and getting the days right – because sometimes, if you just sit around all day and wait for training at night, you’re sitting on the lounge, watching TV, and it takes the energy away.

“We’re doing activities during the mornings, making the players laugh and have fun and enjoy each other’s company, and social rooms, and making sure that when they go on the pitch, they’ve got that energy.”

As recently pointed out to this masthead by former Socceroo Brett Holman – who scored the winner for Australia in their last World Cup victory, 12 long years ago – at this level, it’s not about teaching players how to play football. They already know. Here, coaches have to steel them to believe, and that’s Arnold’s forte.

Let’s do that for one quick moment, before reality has the chance to smack us in the face. Just imagine: a win over France would potentially be the greatest single moment in the 100-year history of the Socceroos and a seismic achivement for the game in Australia. It would make them all instant sporting legends. (OK, that’s enough.)

“Belief” is one the three “major words” Arnold said he would be drilling into his players before kick-off. The others are “energy” – which they have conserved by the manner of their preparation – and “focus”, which now switches to what they have to do on the pitch to pull it off.

Arnold did little to dispel growing rumours around the Aspire campus that he could switch to a back three – the same defensive arrangement that became so controversial during Ange Postecoglou’s tenure as Socceroos coach. “Did your binoculars see those rumours?” Arnold laughed. “You’ll see that on Tuesday.” It makes sense, given the opponents and their own playing stocks, but would raise more than a few eyebrows in Australian football circles.

Whatever the formation, they will need to find a delicate balance between front-foot aggression – matching the standard on the front Arnold says they set for themselves in June – and not crossing the line, be it through undisciplined actions or positional play.

“When we can press and get in their faces, we will,” Arnold said.

“But we’ve got to do that collectively. We’ve watched many clips where other nations press and the front four or five go, but the rest stay, and then they play through. We’ve got to play the game smart.

“We know their strengths. It’s about those 10 blue shirts against 10 yellow, and it’s an individual battle. We’ve got the Aussie DNA – we’ll go out there and fight, kick, scratch, do whatever is required. One of their strengths is technically, and we’ve got to be in their faces, and make sure that we take that strength away from them.”

France was Australia’s first-up opponent at the last World Cup, four years ago. Les Bleus only squeaked over the line 2-1 through a late own goal from Aziz Behich. This week, the French have reflected on that match as one of their most difficult in Russia, and are anticipating something similar again, while also revealing how little they know about the Socceroos individually.

Four years ago, Bert van Marwijk was the short-term appointment as coach following Postecoglou’s resignation. It was obvious then the Dutchman had no real faith in Australia’s playing stocks – and even moreso in hindsight, as Arnold’s methodology stands in complete contrast.

“A lot of them said it was only after the game that they felt that they were just as good [as France] or could have been better. That’s the mentality we’ve got to go in with. Don’t tell me after. Let’s go in with that belief before, and making sure that from the first minute that we’re ready to go.”

The Socceroos have 17 first-timers at a World Cup, and only two players who feature in one of Europe’s top five leagues. Every single member of France’s 26-man squad do – even accounting for the big names on their growing injury list, which has now claimed Ballon d’Or winner Karim Benzema, who joins Paul Pogba, N’golo Kante, Presnel Kimpembe, Christopher Nkunku and Mike Maignan on the sidelines.

Such is their depth, they could field four teams that, on paper, you’d back over Australia’s best.

“You can say that our players aren’t playing the top leagues in the world, and all their players are. But it’s a team sport,” he said.

“It’s about connecting the 11 players, or the 26 players together in a family environment way, and making sure that they’re mates, and they’ve got each other’s backs – that’s when you can get special results.”