Harry Maguire was amongst a host of Manchester United players to passionately protest against Roma’s early penalty at Old Trafford following an explosive start to the Europa League semi-final first-leg. The Red Devils had taken the lead inside eight minutes when Bruno Fernandes finished a brilliant team goal that was started by Paul Pogba, but the joy was short-lived.

The Frenchman beat several Roma men including former team-mate Chris Smalling before feeding the ball into the feet of Cavani.

He then flicked the ball brilliantly in behind the Roma defence to the onrushing Fernandes, who clipped the ball over the goalkeeper and into the net.

United’s delight did not last long though after Roma were awarded a penalty up the other end moments later.

Right-Back Rick Karsdorp raced down the line and slid to keep the ball in play on the byline, kicking it against Pogba’s arm as the United midfielder slid in to block the delivery. 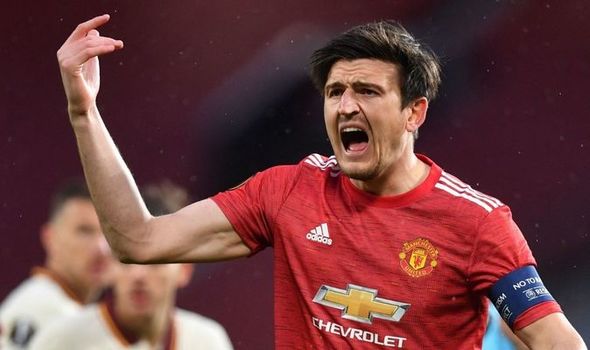 The referee hesitated before pointing to the spot to the fury of several United players.

That included Maguire, who could be overhead shouting at the officials as the referee consulted the linesman.

He bellowed: “It’s his leg!” Before adding: “It hit his leg then his arm!”

Despite Maguire and Pogba’s pleas, Roma were eventually awarded the penalty.

It was dispatched confidently by Lorenzo Pellegrini, who smashed the ball passed David de Gea and into the top left corner.

United then found themselves 2-1 behind as former Manchester City striker Edin Dzeko put his side in front.

It was his fifth goal against United at Old Trafford, a ground he clearly loves playing on.

United named a strong side as they look to prioritise winning the competition, with a top-four finish now seemingly wrapped up… 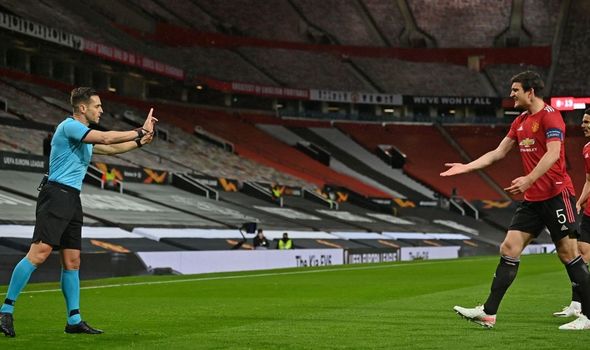 “It’s a good team but I expected Mason Greenwood to play. He’s come right into form,” he said on BT Sport.

“Fred and [Scott] McTominay weren’t great at Leeds on Sunday either so I expected Paul Pogba to nip into those positions.

“You’d then maybe have Rashford on the left-hand side and Greenwood on the right-hand side.

“I think that would have been a more attacking team, they really do sit back as well Roma.

“I thought this would be the ideal chance to get Pogba back into the middle.”