Months and months of strict lockdown in Melbourne were starting to get on Maker Maker's nerves. You might even say it drove him to the edge of the earth.

The 21-year-old had grand plans for this year. A former Melbourne Victory youth prospect, he had just broken into the first team of Port Melbourne when their NPL Victoria campaign was halted after round five. 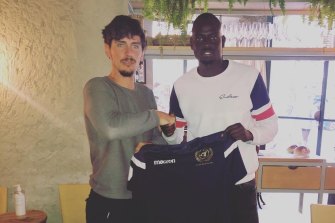 Then he completed a second mini pre-season in preparation for the resumption of play – only for the city's second wave of COVID-19 to intervene once again.

"It was frustrating," said the quietly-spoken midfielder. "I was just looking for a way out of Melbourne, out of lockdown."

Eventually, Maker found one. And it landed him a contract with arguably the most peculiar club in all of world football: Flat Earth FC. 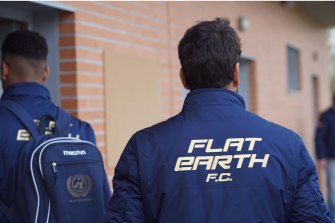 Flat Earth FC bills itself as “the first football club in the world that strives to reveal the truth of the world we live in.”Credit:Instagram

Most clubs represent the city in which they are based, and nothing more. Others – like one of Maker's ex-teams, South Melbourne, or Chilean outfit CD Palestino – were created by migrants to honour their ethnic identities and help them integrate in a new country.

Then there's St. Pauli, the German cult outfit with explicit left-wing political values, and whose supporters are stridently anti-racist, anti-fascist and anti-homophobic.

But Flat Earth FC, who play in Spain's fourth division, is the first club to solely represent an idea – the conspiracy theory that the world is not round, and that the powers that be are trying to obscure this truth from the masses.

The man behind it is Javi Poves, a former centre-back who came through the academies of Atletico Madrid and Rayo Vallecano, and made his La Liga debut for Sporting Gijón in 2011 but retired at the age of 24, disenchanted with how capitalism was destroying football.

"When I was young I played for the love of the game but the more you get to know how soccer works, the more you notice it is all about money, that's its rotten, and it takes away a little of the sheen," he said at the time.

A self-declared "non-conformist", Poves has always been a slightly off-kilter character. He would read books like Karl Marx's Das Kapital or Adolf Hitler's Mein Kampf during training camps, bus trips and flights. He also refused to use a bank account to receive his wages because he didn't want other people speculating with his money.

After hanging up his boots, Poves travelled the world, and in 2016 he returned to Madrid and became involved with a club called Mostoles Balompié. Along the way, he started to ask himself questions. Like, if the world is round, why does water not curve?

"No-one gave me a valid answer," he told Copa 90 last year. "They told me 'it's because of gravity' … yes, there's gravity, but at what scale does it curve water? Because it isn't curved in a glass of water, nor in my bathtub, nor in my neighbourhood's swimming pool, nor in a lake.

"So at which scale does it curve? 'On a planetary scale', they say. Can it be proven? No, so we've got a problem." (Scientists have proved it, for the record). 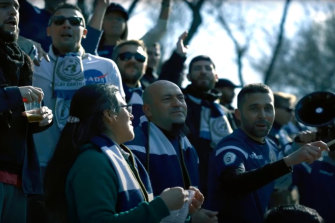 Flat Earth FC has built a small but very loyal fanbase of believers in Spain and around the world.Credit:YouTube

After guiding them to Spain's fourth division, Poves – who by this stage ascended to the presidency of Mostoles Balompié – decided to change the club's name to Flat Earth FC, which bills itself on its website as "the first football club in the world that strives to reveal the truth of the world we live in." 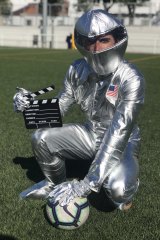 Flat Earth FC’s mascot is a nod to another conspiracy theory: that the moon landings never happened.Credit:Twitter

"I'm gonna use Flat Earth FC as a tool to expand the idea behind this movement, in the same way Real Madrid use their club's image to get a certain position, in the same way Barcelona – now more than ever – use their club with political purposes," Poves said. "I am going to use my club to make sure people reconsider their lives."

Many thought it was a publicity stunt, but Poves was – and remains – deadly serious. The advantage of being a club based on a conspiracy theory, however, is that fans can come from all corners of the globe – and with followers from countries including Venezuela, Colombia, Argentina, Japan, Kazakhstan, Russia and, yes, even Australia, Poves believes Flat Earth FC is probably in the top 10 Spanish clubs in terms of international support.

They even have a mascot – an astronaut in a tight-fitting silver suit, a cheeky nod to those who believe the moon landings were faked – and a very active home end full of loyal terraplanistas (Spanish for … well, you can guess what) who sing songs about how the Spanish minister of science is a liar, NASA is fake, and how the Mayans were right all along.

"There's plenty of fans," said Maker, who has been in Madrid since the start of September and was awaiting his international clearance to begin playing when he spoke to the Herald.

"They have drums, people, fans turning up, making noise, singing. Even with the restrictions they're at games – it surprised me how big the fanbase is."

So what was his reaction when he discovered the team offering him a lifeline was called Flat Earth FC? "I was like, 'oh, OK, cool'," Maker said.

"I didn't know anything about the club. I'm just worried about football to be honest. The rest of it – the name and what they're about and all that – it doesn't really mean anything to me. 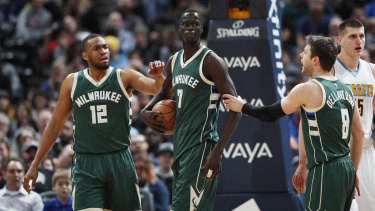 Thon Maker playing for Milwaukee in the NBA.Credit:David Zalubowski

Oblivious he may be, but Maker is very happy with his decision to move to Spain. He rates the standard of play in the Tercera División as "above A-League", firmly believes Flat Earth FC could very well contend for promotion to the third tier, and is hopeful his tenure can springboard him to bigger and better things.

"The standard is something else here," Maker said. "It's a fully professional set-up. The boys are good. It's just normal, like any other club. Completely normal."