Cristiano Ronaldo has earned a reputation in recent years for having a greater gravitational pull than any player in world football. His presence is said to warp and bend any team he plays in towards its natural centre, a.k.a. Cristiano Ronaldo. This has been exacerbated by how, with age, he has refined his game down to the bare essentials based around his goal-poaching instincts.

It is a little bit of oversimplification, exaggerated by Ronaldo’s personality as much as his performances, and not always internally consistent. Is Ronaldo now a stripped-back penalty box predator or always at the centre of everything and not letting anyone else have a kick? In any case, that is the perception and it has sometimes felt like a reality for one of his compatriots, international team-mates and new colleagues at club level.

Ronaldo became the nine-year-old Bruno Fernandes’ favourite player after watching him play for Portugal at Euro 2004. “That year stays with everyone because we lost the final in Portugal, we saw him crying after the final,” he told United supporters in a Q&A session towards the end of last season. “He was a young boy who was starting to shine and from there I started to watch him.” His first European Championship playing alongside Ronaldo did not go according to plan, though.

As his boyhood hero racked up the five goals and one assist that won him the tournament’s Golden Boot, Fernandes struggled, lost his starting place and almost conceded a penalty that could have sent Portugal packing in the group stages. Jose Mourinho described his performances at the tournament as ‘anonymous’. Compared to his United displays, they were, and were part of a well-established pattern.

The theory is simple: Fernandes cannot shine in Ronaldo’s shadow, and the raw numbers support that hypothesis to an extent. He and Ronaldo have played together 26 times for Portugal in all. Ronaldo has scored 30 goals in those games while Fernandes has scored four. For a player who has averaged more than one every two games at club level over the past four seasons, that is a significant drop-off.

It is not as if Fernandes has suddenly turned provider for Ronaldo and their Portugal team-mates either, managing just three assists in those games. Together, Fernandes and Ronaldo have only combined for two goals. Fernandes scored from a Ronaldo cross in a friendly against Algeria in 2018, then finally returned the favour to Ronaldo in a friendly against Israel before this summer’s Euros.

This September international break was the same story in microcosm. The record 110th and 111th international goals of Ronaldo’s career came after Fernandes’ 62nd-minute substitution against the Republic of Ireland. With Ronaldo then suspended and back in Manchester by the time of their following qualifier away to Azerbaijan, Fernandes pulled the strings to set up Bernardo Silva’s majestic opening goal and had a telling hand in the second.

If this is the partnership to lead United to their first Premier League title in eight years, it appears to require some work.

The Ronaldo-Fernandes debate is a crude one, though, mixing up correlation and causation, based on a relatively small number of games and ignoring numerous other factors, let alone the reality that international football is a very different environment to its club equivalent. Fernandes’ struggles with Portugal will not necessarily translate to United simply because Ronaldo has returned. Really, it is all about what role he plays.

With Portugal, the infamously risk-averse Fernando Santos has tended to use Fernandes in a deeper and more conservative presence than Ole Gunnar Solskjaer. Solskjaer has shown pragmatic tendencies of his own at times over his two-and-a-half years in charge at United but generally, he has trusted his most naturally gifted players to express themselves and sought ways for them to maximise their ability. However Solskjaer fits Ronaldo into this United system, it would be a surprise if he purposely neutered Fernandes.

There are very real, tangible ways in which Ronaldo’s arrival will change Fernandes’ game. The most obvious is penalty-taking. Fernandes has never stepped up to the spot for Portugal when Ronaldo is also on the pitch. Solskjaer has rotated spot-kick duties in the past, and could offer a clue as to his intentions in his pre-Newcastle press conference later today, but if Ronaldo is to be the designated taker going forward, some of the air will be sucked out of Fernandes’ scoring numbers.

Half of Fernandes’ 18 league goals last season were penalties. Another was a direct free-kick, also a responsibility that may transfer over to Ronaldo. Strip those out and you are left with eight open play goals for Fernandes last term. That’s the same number as Callum Wilson, Joe Willock and David McGoldrick. Take penalties out of his xG figures and he is in line with the likes of Tomas Soucek, Raphinha and Pablo Fornals. These are all talented players but Fernandes’s performances for United mean he is judged to a higher, more exacting standard.

It would be no surprise, then, if Fernandes’ goal output diminished significantly while playing alongside Ronaldo but his influence does not have to suffer the same fate. Ronaldo may hog penalties, free-kicks and ultimately goals – scoring more than a third of Juventus’ over his three Serie A seasons – but he still requires service. And static penalty-box presences, if that is what Ronaldo now is, need crosses.

Last season, two players played significantly more crosses than any other regular starters at United: Luke Shaw and Fernandes, Solskjaer’s two main creative outlets last season by a distance. Though Fernandes is not typically thought of as a wide player he has been known to go roaming around the pitch, taking up positions in the inside-left and right half spaces, especially when United were struggling to break down a deep-set defence.

This did not happen quite as often as at other top-flight sides, with United playing 444 crosses last season, a figure around league average. Given the amount of possession Solskjaer’s side tend to enjoy, that is actually relatively low, but with Ronaldo to aim at that could well change. For two of his three seasons in Italy, Juventus were in Serie A’s top three for crosses played. Last season, they played more than any other side. If United go down the same route, Fernandes will be heavily involved. 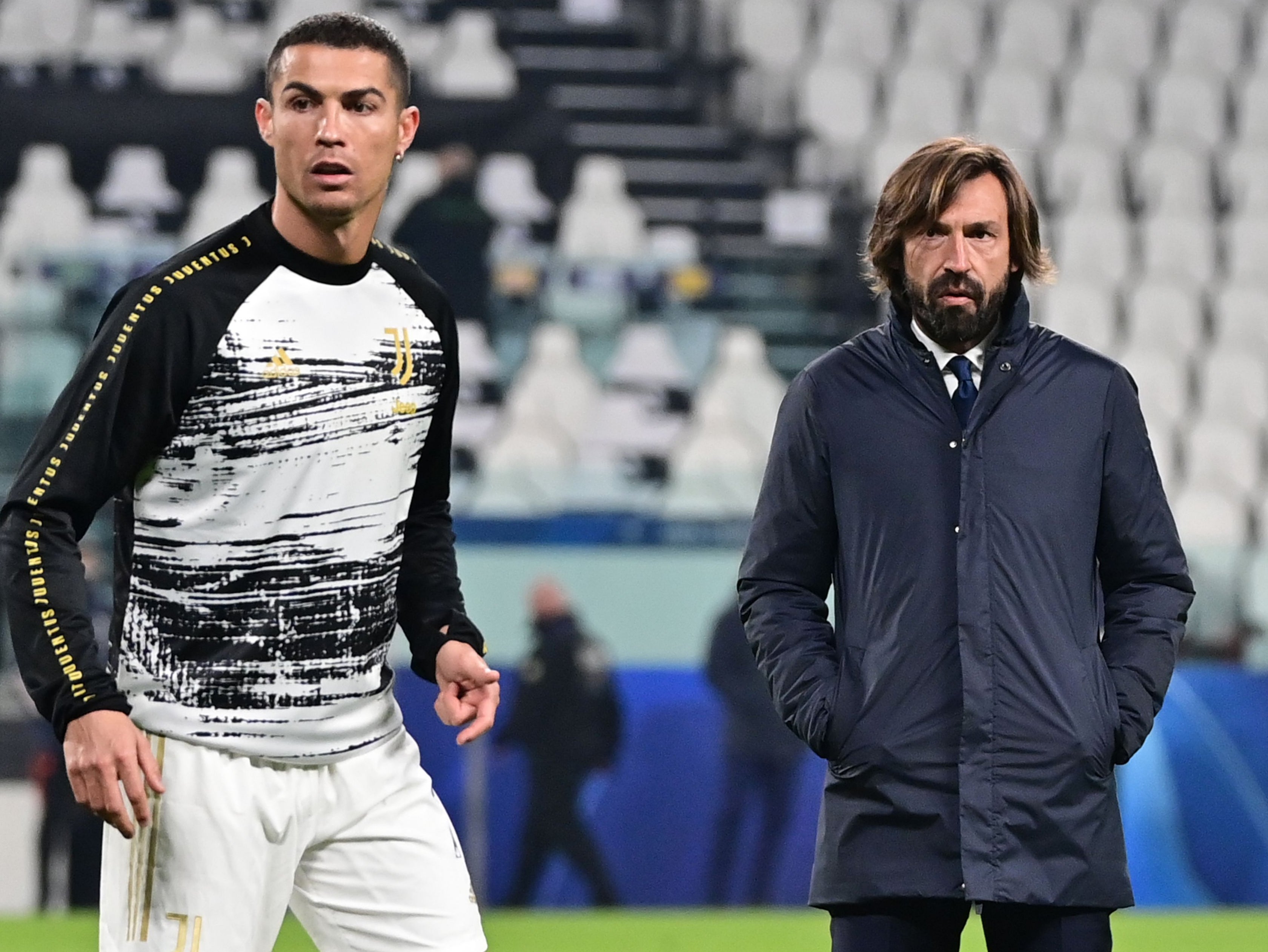 There is another way his game could change, though. One thing Ronaldo has never consistently been at club level is a lone striker, even after transitioning from a wide forward to a centre forward. During his first season in Turin, Massimiliano Allegri tended to play him out on the left wing but when he was fielded centrally, he was practically always working in tandem with either Paulo Dybala or Mario Mandzukic.

Maurizio Sarri arrived the following year as a proponent of a three-man attack, again often using Ronaldo on the wing, yet a brief mid-season reshuffle saw him operate centrally and always as part of a pair, alongside either Dybala or Gonzalo Higuain. Ronaldo and Sarri infamously did not always see eye-to-eye but it was his most prolific year in Serie A, with 31 goals in 33 games.

Ronaldo’s transition to a centre forward was finally completed last season under Andrea Pirlo, with the vast majority of his minutes coming up front. Again, he was not alone. One of Dybala, Alvaro Morata or Dejan Kulusevski were invariably by his side and, even during a year where Ronaldo’s unhappiness in Turin gradually became an open secret, another 29 goals in 33 Serie A games followed.

Solskjaer has experimented with strike partnerships as part of formation changes in the past, briefly trying a midfield diamond and a three-man defence on for size last season. Eventually, he has always reverted to his trusted 4-2-3-1 with Fernandes operating as No 10. What if that role was modified, with him operating off Ronaldo and running beyond him? Could that mimic the Juventus partnerships? Would that be one way to making Ronaldo and Fernandes a winning combination?

The proof will be out on the pitch. Ronaldo will almost certainly be a success on his goal record alone but he is something of a luxury signing that does not address United’s biggest issues, and could potentially create other problems further down the line. How Solskjaer makes all these parts fit together to form a coherent, cohesive team of genuine title contenders remains to be seen, and how Ronaldo’s arrival affects Fernandes will be fascinating.

Yet just because United’s best player for the past year-and-a-half has not clicked with Ronaldo at international level does not mean this is the end of his influence. It may in fact be the beginning of Bruno 2.0.