Home » Tennis » ‘Absolutely gutted’: Hon out of the Australian Open

Little more than a year after achieving a career-high singles ranking before then reaching the Australian Open second round, Priscilla Hon has been hard hit by injury and will miss February's major at Melbourne Park.

The 22-year-old said she was "absolutely gutted" to have to pull out of the Open – which starts on February 8 – describing the injury, where she tore the labrum in her hip, as her first significant hurdle. 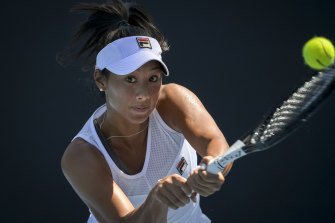 Priscilla Hon will miss the Australian Open with a hip problem.Credit:Eddie Jim

"Missing a home slam definitely hits differently, but unfortunately I won't be able to come back just yet," Hon said on Twitter.

"I'm super grateful that this is my first major setback, and I'm so grateful for the people around me who have been supporting me during this long road of rehab.

"I'll be continuing to work hard to get back on court as soon as possible."

World No.1 Ashleigh Barty will spearhead the local assault on the women's title at the rescheduled major at Melbourne Park. World No. 68 Ajla Tomljanovic and Sam Stosur (112) are next on the rankings.

Hon reached her highest singles ranking (118) 14 months ago, profiting from a second-round appearance at the French Open and a first-round exit at Flushing Meadows. As a wildcard, Hon managed her best Australian Open result in January, losing to former champion Angelique Kerber in the second round.

The Queenslander tore the labrum in her hip this year while playing the sport's UTR series, a domestic competition designed to give Australia's professional players some much-needed competition during the lay-off caused by the coronavirus pandemic.

Hon also has a career-high doubles ranking of world No.90.