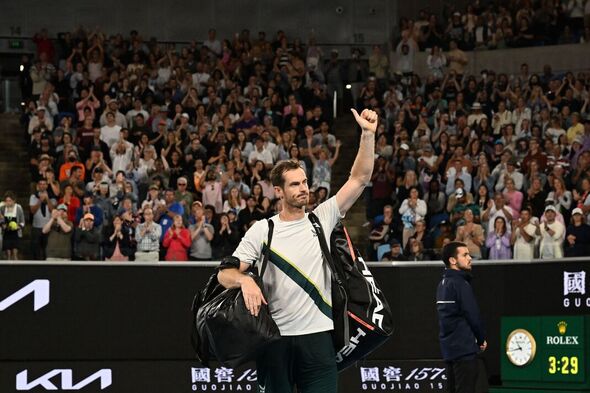 Andy Murray said he wants his career “doing myself justice” like his heroic run at the Australian Open. The former world No1 won two stunning five-set victories here – his best Grand Slam win with a metal hip over Matteo Berretttini and his longest and latest ever win over Thanasi Kokkinakis in the second round.

But Murray suffered from stiffness and back pain as he went down 6-1 6-7 6-3 6-4 in three hours and 29 minutes to the No.24 seed Roberto Bautista Agut today. He spent 14 hours and three minutes on court here in three matches.

The Scot, 35, was the Last Brit Standing in the singles at a Grand Slam for the first time since the 2017 French Open. And the double Olympic champion proved he still has the game and the popularity to entertain his fans.

Murray said: “I think obviously you never know exactly when the end is going to be. I would like to go out playing tennis like this, where I’m competing with the best players in the world in the biggest events and doing myself justice.

“There were maybe times the last year or so where I didn’t really feel like I was playing well, and I didn’t enjoy the way that I was playing. Those sacrifices and that effort that I put in allowed me to get through those matches and play at a high level that I think was entertaining for the people watching.

“I felt good about the way that I was playing. It’s more enjoyable for me when I’m playing like that, when I’m coming into a major event and really believing that I can do some damage.

“I can have a deeper run than the third round of a slam, there’s no question about that. Obviously draws can open up for you. I need to also help myself with that. If I was playing at this level last year, I probably wouldn’t be ranked 50, 60 in the world. It’s up to me to try and change that.”

Murray’s second round victory ended at 4.05am Friday morning local time and he was back on the same Margaret Court Arena less than 39 hours later

“I slept from 6 until 9 the morning I played the match with Kokkinakis, which obviously isn’t enough,” he said. “Then I had to come in here. I had about seven or eight blisters that I had to have drained and then he put this liquid in to dry it. I had to come in in the morning to give that time to settle. Then I went back to the hotel, slept for a few hours, and then hit for, like, 15 minutes yesterday, then the ice baths, saw my physio.

“Once I got in the rallies and stuff, it wasn’t really too bad, to be honest. I’ve felt worse on the court than that. It was just the serve, especially like after I got up from sitting at the end, change out the first couple of serves, didn’t feel good.”

Murray, who has still to get past the third round of a Grand Slam with a metal hip, added: “How do I feel right now? Yeah, I mean, lots of mixed emotions. I mean, I feel like I gave everything that I had to this event. So I’m proud of that.

“That is really, in whatever you’re doing, all you can do. You can’t always control the outcome. You can’t control how well you’re going to play or the result. You can control the effort that you put into it, and I gave everything that I had the last three matches. I’m very proud of that.

“But, yeah, I’m also disappointed because I put loads of work into the beginning of this year and was playing well enough to have a really good run, have a deep run.

“I think even tonight I’m competing against a guy 20 in the world, you know, and it’s still very tight considering the circumstances. I feel like, yeah, I’m disappointed because I feel like I could have gone quite a bit further.”