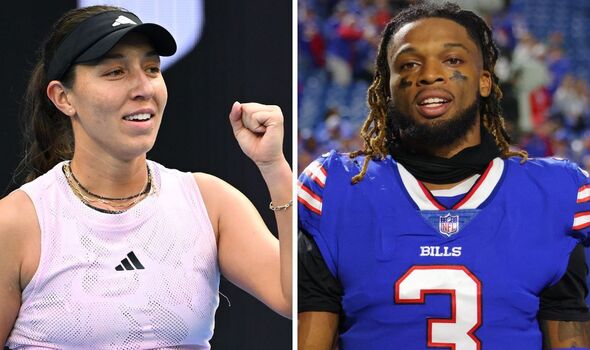 Jessica Pegula revealed that she has been messaging Buffalo Bills star Damar Hamlin during her Australian Open run following his release from hospital after the safety suffered a cardiac arrest during a game three weeks ago. The third seed in Melbourne is the daughter of billionaire Bills owner Terry Pegula and has been paying tribute to Hamlin in her matches, donning a number three on her shorts throughout the tournament.

Pegula is the highest-ranked player left in the women’s draw at the Australian Open following world No 1 Iga Swiatek’s defeat on Sunday and Ons Jabeur’s second-round upset earlier in the week. The third seed is through to her third-successive quarter-final in Melbourne and is hoping to finally go one better as she takes inspiration from a different face this year in Bills safety Hamlin.

The 24-year-old suffered a cardiac arrest during a game against the Cincinnati Bengals on January 2 and has since been discharged from hospital but still faces a lengthy recovery. And Pegula has now revealed that she has been in communication with Hamlin as she draws on his own health improvement as motivation for her run at Melbourne Park.

“He’s recovered so quickly and so fast that it’s just taken a lot of weight off of the teams, the players, the sport, other players,” the two-time title winner told the WTA earlier in the week. “It’s just been a really amazing story. Any time I can kind of ride that amazing kind of story and feeling, I think it’s good to try to take that with you into your matches.”

JUST IN: Djokovic made Korda ditch hockey for tennis 14 years before Aus Open

The third seed is on a roll yet again in Australia but finds herself in new territory this time around as the highest-ranked player left in the draw and the favourite in all of her matches after coming up against the likes of Ash Barty in her previous quarter-final appearances. And she has been quick to give credit to Hamlin for inspiring her with his recovery as well as his messages to her during the tournament.

“Definitely some part of it has inspired me a lot,” the 28-year-old continued. “It’s cool. He’s wrote me a few times as well after I’ve won here. It’s just amazing. I think it just shows you that people’s lives are at stake.”

Pegula is yet to drop a set in Australia and has lost just 18 games en route to the quarter-final, and admitted that she was playing with less pressure after Hamlin’s story gave her some perspective. She added: “It’s so much bigger than sport.

“Sometimes we lose sight of that. Sometimes it’s not a tennis match. At the same time that can help you kind of play free and not get so stressed I think. I definitely have carried some of it with me, for sure.”