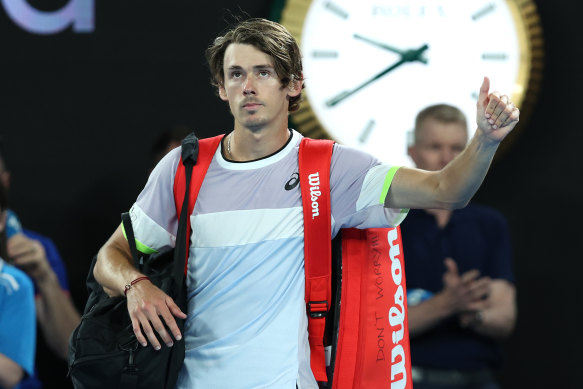 Alex de Minaur walks off after losing in straight sets to Novak Djokovic in their fourth round match.Credit:Getty Images

He said afterwards he had almost certainly never played anyone better than the version of Djokovic he faced on Monday night, even admitting he “didn’t really know what to do out there”.

De Minaur also stopped narrowly short of questioning the validity of Djokovic’s much-scrutinised left hamstring issue – pointing out that the Serbian was “moving pretty well” – but left little to the imagination.

Nick Kyrgios’ manager Daniel Horsfall says the Australian star is on track to return to competitive tennis at Indian Wells in March after undergoing surgery on Monday.

Kyrgios went under the knife in Canberra to repair a small tear in his left lateral meniscus, which caused a cyst to grow in the meniscus – the piece of cartilage that acts as a shock absorber between the shin and thigh bones. 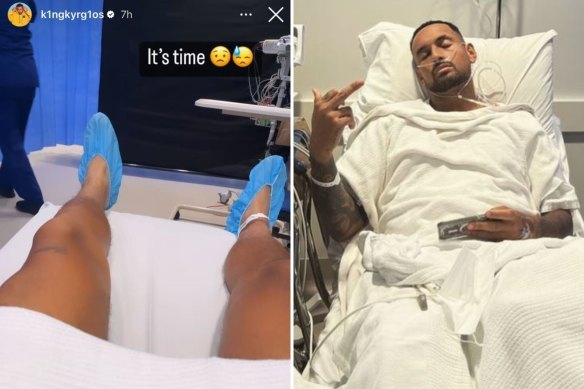 Nick Kyrgios in hospital before and after knee surgeryCredit:Instagram

Kyrgios posted a photo from his hospital bed after the surgery, and will remain in Canberra over the next few weeks in preparation for a return to the ATP tour in the United States on March 6.

“The surgery was a great success,” Horsfall told the Herald and The Age. “We couldn’t have been more pleased with the outcome of it. Now we will be pushing ahead for a speedy recovery and are aiming to see everyone at Indian Wells.”

So much for Novak Djokovic being (maybe) vulnerable

So much for Novak Djokovic, maybe, being vulnerable.

After a competitive start, the nine-time king of Melbourne Park broke Australian hearts with a devastating 6-2, 6-1, 6-2 fourth-round romp over an outmatched Alex de Minaur that should silence any doubters about his title credentials. 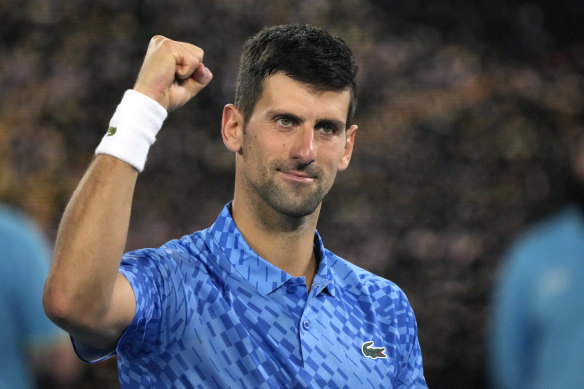 It seems improbable, particularly after Monday night’s scintillating performance, that anyone will stop him this Australian Open fortnight from the ultimate redemption, after being booted out of the country 12 months ago.

De Minaur even suggested Djokovic was “very close to his best”, a scary proposition for his seven remaining challengers.

Good morning tennis fans and welcome to day nine of the Australian Open.

Sadly, there are no Australians left competing for the women’s or men’s singles title after Novak Djokovic comprehensively outmatched Alex de Minaur last night in a fourth-round romp.

But there is still plenty going on, with all eyes on the quarter-finals.

And the Wheelchair Championships are set to get under way with world No. 3 Heath Davidson among 23 Aussies in the mix.

Elena Rybakina, who knocked out world No.1 Iga Swiatek in the fourth round, is back on court against Jelena Ostapenko, who defeated young American Coco Gauff. And Karen Khachanov is up against Sebastian Korda.

Then, Jessica Pegula will face Victoria Azarenka before the headline match where Stefanos Tsitsipas will meet Jiri Lehecka for a spot in the semi-finals.

Play starts at 11am AEDT – 12.30pm for the first singles match – and will run until late tonight, please feel free to leave a comment on the blog at anytime and enjoy the day to come.