Rafael Nadal and a host of leading players have lamented how the ongoing visa saga of Novak Djokovic has completely overshadowed the start of the Australian Open, with the Spanish great saying not one player in the history of tennis is above the sport itself.

But there is a divide among some players, with even rivals including German Alexander Zverev and Nick Kyrgios in agreement that the situation with Djokovic is alarming.

Zverev, a leading contender for the Australian Open title, believes the nine-time champion in Melbourne is the victim of his high profile and expressed concern about the process that has led to the champion being detained again. 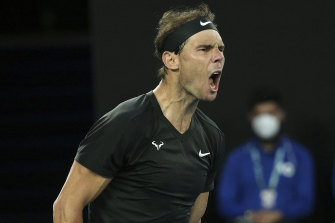 “I think Novak is a very big name, a global superstar,” Zverev said.

“I think that he is someone that maybe people think they can make a big deal out of it just because it’s Novak.

“I don’t know enough of the situation, but I do think if it would not be Novak Djokovic, world No. 1, with 20 grand slams, all that, then it would not be as big of a drama. That I do believe.”

Kyrgios said the matter was embarrassing for Australia.

“I thought the vaccination (for Djokovic) was the issue, then him having the (medical) exemption from two independent sort of health departments,” Kyrgios told The Age and SMH.

“Then he went to court and the judge was basically saying ‘what more does this guy need to do to be here’.

“Now they’re nitpicking with the visa and then they’re kind of letting him prepare, and kind of not.

“I’m like ***** ….. either send him out early, or let him play. Now I feel it’s getting a bit embarrassing. I feel it’s not fair on him now. Preparing for a grand slam is hard enough.”

“I’m here to talk about tennis. Not enough tennis has been talked about in the last couple of weeks, which is a shame.”

Ahead of the next chapter of the Djokovic saga – a Federal Court hearing on Sunday – 2009 Australian Open champion Nadal emphasised that this year’s major in Melbourne would be successful.

“I tell you one thing – it’s very clear that Novak Djokovic is one of the best players of the history, without a doubt,” Nadal said on Saturday.

“But there is no one player in history that’s more important than an event because the players stays and then goes, and other [new] players are coming. No one – Roger [Federer], Novak, myself, Bjorn Borg, he was amazing in his times – tennis keep going.

“Australian Open is much more important than any player.”

World No.4 Stefanos Tsitsipas echoed Nadal’s sentiment, saying the lack of discussion about tennis in the countdown to action at Melbourne Park was “a shame”.

“Well, I won’t lie. It has been pretty much on every news outlet the last couple of weeks. It has received a lot of attention. A lot of people are obviously talking about it,” said the Roland Garros finalist.

“That’s why I’m here to talk about tennis.

“Not enough tennis has been talked about in the last couple of weeks, which is a shame.”

Defending women’s champion Naomi Osaka expressed her sadness that some might remember nine-time Australian Open champion Djokovic only for his current predicament.

“I think it’s an unfortunate situation. Like, he’s such a great player, and it’s kind of sad that some people might remember in this way,” she said.

Osaka stressed, however, that it was not up to fellow players to resolve the impasse.

“It’s up to the government how Australia is deciding to handle it,” said the four-time major winner.

Australia’s top-ranked men’s player Alex de Minaur says he and other players simply want to get on with their Australian Open campaigns.

“This whole situation has taken a lot of spotlight away from us competitors. We’re here to play the Australian Open,” de Minaur said.

“We’re here on our own terms ready to compete, hopefully have a very good couple weeks.

It feels like it’s taking away from us competitors who just want to start. We’re just eager to go out and compete.

“To be honest I’m just ready to put all of this behind me and focus on playing my tennis matches, kind of let my tennis do the talking.”

On Saturday the Federal Court adjourned a short hearing in which parties for both Djokovic and Immigration Minister Alex Hawke discussed procedural matters about how the challenge to the visa cancellation will go ahead this weekend.

All parties agreed to the hearing going ahead on Sunday at 9.30am (AEDT).

The only dispute between the parties was whether Djokovic’s case would be heard by a single judge of the court or the full court of three judges.

If the case is heard by the full court, Minister Hawke will have no avenue to appeal any decision made.