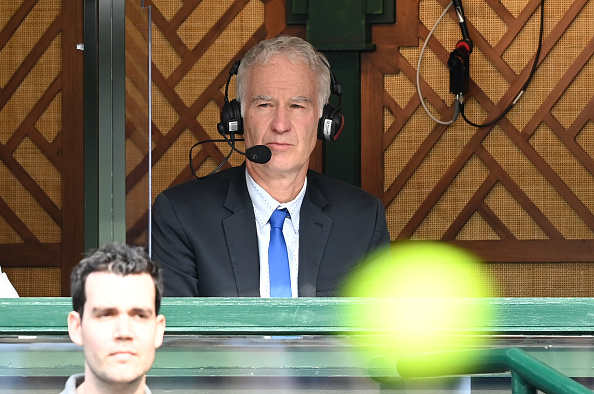 The BBC has leapt to the defence of John McEnroe, following his controversial comments in the wake of Emma Raducanu’s unfortunate Wimbledon demise.

British teenager Raducanu, the new darling of SW19, enjoyed a spectacular run to the fourth round but was forced to retire when staring defeat in the face against Australia’s Ajla Tomljanovic on Monday evening.

Tournament officials confirmed the 18-year-old was forced to withdraw as a result of breathing difficulties and while the majority of the reaction to her retirement was positive, McEnroe faced a major backlash after claiming the young Brit was overawed by the occasion.

The three-times Wimbledon champion told the BBC: ‘It’s a shame. I feel bad for Emma. It appears like it just got too much which is understandable. It makes you look at the guys and girls who have been around for so long and wonder how they handle it. Hopefully she will learn from this experience.

‘Maybe it’s not a shame this has happened right now when she is 18. I played this tournament at 18 and in a way I was happy I lost. I was able to understand what it would take to make it. Allow her to take some deep breaths and maybe get some wildcards.’

Tomljanovic, the beneficiary of the world No.338 pulling out, was among those to call McEnroe out, but the BBC insits the divisive American was well within his rights to express an opinion he was more than qualified to hold.

A statement given to the Daily Telegraph read: ‘John McEnroe offered his personal view on the pressures that tennis players face, based on both his own experience and those of current player.

‘He was sympathetic to Emma’s situation.’

Raducanu, meanwhile, was unable to appear at a post match press conference but on Tuesday broke her silence with a statement on Instagram, before conducting an interview with the BBC’s Sue Barker.

‘I’m very disappointed I couldn’t finish the match,’ she told Barker. ‘I really wanted to be able to compete & try my best. I found it very difficult to regulate my breathing, it was emphasised by some long rallies which made it tough to keep my composure.

‘I don’t know what caused it. I think it was a combination of everything that has gone on behind the scenes in the past week.

‘An accumulation of the excitement, the buzz – I think it’s a great learning experience for me going forwards. Hopefully next time I’ll be better prepared.’