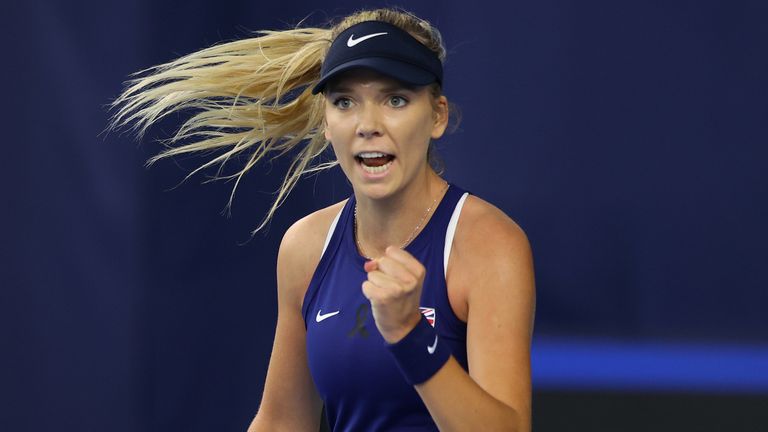 Great Britain are on the brink of reaching next year’s Billie Jean King Cup qualifiers after Katie Boulter and Heather Watson handed them a 2-0 lead over Mexico at the National Tennis Centre on Friday.

Boulter gave Britain the perfect start to their play-off with victory over Marcela Zacarias at a near-deserted
NTC in Roehampton.

Watson followed it up when she saw off Giuliana Olmos 7-5 6-1 in the second singles clash.

When you just want to give your captain a winning [email protected] 🤗 @annekeothavong pic.twitter.com/zHwTbUnbEE

With the tie being played behind closed doors, the two players’ team-mates and support staff were the only people cheering them on as Boulter pulled away to win 7-5 6-0.

This was a first appearance in the competition – formerly known as Fed Cup – for Boulter since she aggravated a back injury in helping Britain reach the World Group with victory over Kazakhstan in 2019.

The 24-year-old is still ranked down at 291 as a consequence, six places below her opponent, and she was twice a break down in the opening set.

Boulter saved more break points at 5-5, and that proved to be the decisive moment, with the British number nine not losing another game as she overpowered Zacarias in the second set.

“I was a little bit nervous at the start. Obviously the occasion, I knew what it was and I wanted to play my best tennis. Sometimes it’s difficult to do that and I knew she was going to be a tough opponent,” Boulter said.

“Of course it was natural to have nerves and I felt like a dealt with them really well and managed to tough out the first. That gave me a lot of momentum and gave me the confidence to go into the second, and I thought I played some really good tennis in the second set.

“I’ve been doing that day in, day out on the practice court, it’s just a matter of doing more and more of it on the match court.”

Watson’s win followed a similar pattern to the first match, with the British No 2 edging a tight opening set before pulling away against a player ranked more than 350 places lower.

The victory was the 28-year-old’s 22nd in the competition, moving her clear of captain Anne Keothavong into second place in the all-time British standings behind Virginia Wade.