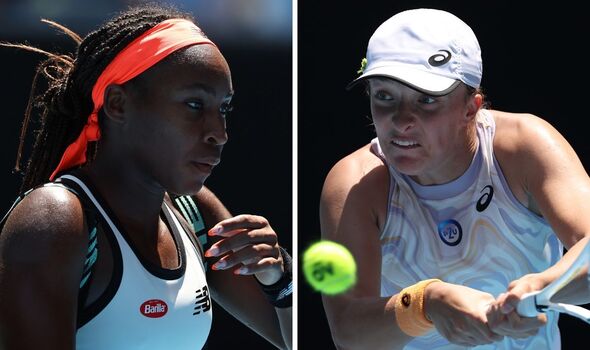 WORLD No1 Iga Swiatek and Coco Gauff both crashed out on a Sunday of shocks at the Australian Open.

The Pole lost to Wimbledon champion Elena Rybakina to make Grand Slam history here. And the teenage American was in tears in her press conference as he went out to former French Open champion Jelena Ostapenka.

And the best wheelchair tennis player in history has announced his retirement.

All the top seeds out

French and US Open champion Swiatek was the hot favourite to win her fourth Grand Slam title here but she was knocked out by Russian-born Kazakh Rybakina 6-4 6-6.

The race to succeed the retired Ash Barty as champion is now wide open. And after the early defeats for No.2 seed Ons Jabeur – and Rafa Nadal and Casper Ruud in the men’s event – this is the first Grand Slam tournament in the Open Era where the top two seeds in both the men’s and women’s singles draws have lost before the quarter-finals.

It ends in tears for Coco

The American teenager knocked out Emma Raducanu and appeared in the form to win her first Grand Slam title. But the No.7 seed lost 7-5 6-3 to No.17 seed Jelena Ostapenko of Latvia.

Tearing up in her post-match press conference, Gauff said: “I think it’s because I worked really hard, and I felt really good coming into the tournament, and I still feel good. I still feel like I’ve improved a lot. But when you play a player like her and she plays really well, it’s like, you know, there’s nothing you can do. I’m okay. We can keep going.”

JUST IN: Aus Open once hit by sexist storm after female player asked to twirl

Khachanov is a dark horse.

Former US Open champion Daniil Medvedev is out but there could still be a Russian winner here. Andrey Rublev was superb in his destruction of Dan Evans on Saturday. And No.18 seed Karen Khachanov was unplayable for two bagel sets against No.31 seed Yoshihito Nishioka.

Channel 9 commentator Todd Woodbridge said: “It’s like a parking ticket the day you get your tax bill. Nothing is going for him.”

With the support of the crowd in the John Cain Arena, Nishioka forced a third set tiebreak before losing 6-0 6-0 7-6.

Khachanov said: “The first two sets – I don’t really know what was going on. Then I tried to stay focussed on the match. I am playing well. I am really to go through.

Djokovic has a date with Katie Boulter’s boyfriend

Tomorrow’s schedule has been released and the nine-time champion is back on first in the night session in the Rod Laver Arena – at 8am UK time – against the only Australian left in the singles.

World No.22 Alex De Minaur and British No.3 Boulter have been an item for nearly two years. And Leicester City fan, who won an ITF event in Canberra earlier this month before going out in qualifying here, has been adding her support in her Aussie’s player’s box during the tournament.

The Melbourne Sun Herald has complained today that Djkovic, who was deported last year, has been given special treatment on his return.

The Serb has his request to play in the night session always granted – and he was allowed a private practice session in the Rod Laver Arena before his win over Grigor Dimitrov while his opponent prepared on the outside courts.

Shingo Kunieda, the most successful player in the history of wheelchair tennis, announced his retirement from the sport on Sunday at the age of 38.

The top-ranked Kunieda won 28 Grand Slam singles titles and completed the career Grand Slam of all four majors when he won Wimbledon in 2022.

“I have been thinking about the retirement since my dream came true at Tokyo Paralympics,” the Japan player said on social media. “Last year Wimbledon singles title for the first time made me feel that my energy was little left to compete.

“By capturing the 10th time (as ITF) World Champion, I felt that I had done enough in what I wanted to accomplish and thought it was the right time to retire.”