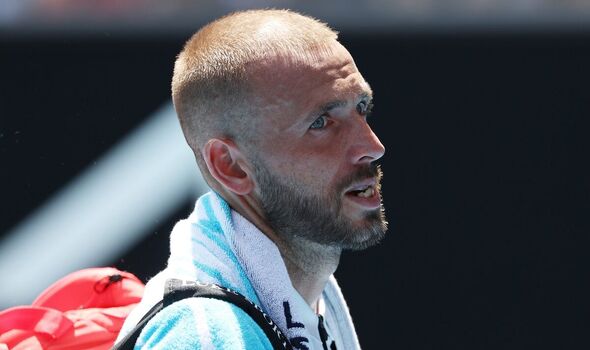 Dan Evans was driven bananas by his Russian mate today to leave Andy Murray as the last Brit standing in the singles at the Australian Open
Alex Zverev has given a revealing interview about his battle with diabetes.
Aryna Sabalenka has yet to drop a set this year.
And an American doubles star has revealed she has received an apology from an umpire after a terrible call went against her.

The British No.2 gave Andrey Rublev a banana during the first set of their third round clash in the Margaret Court Arena. And the ruthless Russian responded by hitting 60 winners to win 6-4 6-2 6-3 in just over two hours.

Evans said: “I quite like him, so I shared with him. That was about it. They asked for four bananas but only brought two, so I donated them too so he could have one. Would I have given the banana to somebody you didn’t like? No, no.

No.5 seed Rublev said: “I didn’t ask him. I asked the ball boy. Dan asked for two bananas earlier and he had two. He just gave me one. Okay, I take it. And I caught it. He helped me with some energy for sure. I won an extra two games because I ate a banana.

“It was just a nice and fun moment between us. We have a great relationship. We played great matches. I think we played quite a lot already, and he wins some matches and I win some matches. But I won the last one now. Next time he will need to take revenge.”

But there were no sour grapes from No.25 seed Evans or his defeat. “Andrey was too good,” he said. “He played some good tennis. I didn’t feel I did too much wrong. He has hit his backhand down the line very well. He was very aggressive and better than me.”

The last time Andy Murray, who faces Roberto Bautista Agut in night session later (8am UK time), was the last British singles player at a Grand Slam was at the 2017 French Open.

The Olympic champion, who suffered a horrible ankle ligament injury at the French Open, went out in the second round on his return to Grand Slam action.

But the world No.2 has spoken to Channel Nine here about his Type 1 diabetes in a bid to remove any stigma about the condition.

“My parents were very scared, obviously very worried, mum was crying a lot,” said the German. “A lot of parents get intimidated by a lot of doctors who say ‘your kid is very limited’, which is not the case.

“I would say to the doctors, ‘well yeah, I want to play tennis. That’s the only thing I really care about’.

“This is what really stuck into my mind. It made me quite upset, as well, to be honest, because I don’t think you should set any limits to kids. It’s just not fair to them. “Maybe I have all of that trauma from back in the days, but you should never be embarrassed of it.”

No.5 seed Aryna Sabalenka is through to the last 16 for the third consecutive year in pursuit of her first Grand Slam.
And the Belarusian is in hot form after beating her former doubles partner Elise Mertens 6-2 6-3.

Sabalenka won her 11th WTA title in Adelaide and has yet to drop a set this year.

“I am super happy to be here,” she said. “You saw my good level. TIt is really tough to play against her. She is a super-fighter and an amazing player. The atmosphere was great even if they were supporting her more! I am playing a little bit better than last year and that is why I am enjoying it.

Doubling down in doubles

Alison Riske-Amritraj has revealed she has received an apology from the umpire after an atrocious call during her doubles match – but accused her opponent of “cheating”.

The American quickly apologised for hit a ball against the body of her opponent but German umpire Nico Helwerth hit her with a hindrance call.

The point was given to Natela Dzalamidze and Alexandra Panova – to the fury of Riske-Amritraj and her partner Linda Fruhvitova.

Riske-Amritraj today took to social media to write: “She should have called it on herself & the umpire apologised for his incorrect ruling after, which I accepted. Poor sportsmanship and cheating happens all the time, especially at the junior level. Parents/players spend too much time, money & mental energy for that experience.”

Top seeds Neal Skupksi and Wes Koolhof survive a deciding third-set tie-break against the Tsitsipas brothers to win 7-6 4-6 7-6 to reach the third round of the men’s doubles.

The world No.82 beat the injured Marketa Vondrousova 7-5 2-6 6-3 in a Czech derby. She is the youngest player left in the draw and is the third  player aged 17 or younger to reach the last 16 here after Coco Gauff (2020) and Amanda Anismova (2019)
Fruhvirtova next faces Donna Vekic.