His stance puts him at odds with Nick Kyrgios, who shot back at criticism of multiple team tournaments with claims the Davis Cup, Laver Cup and the new ATP Cup are key to the survival of tennis. 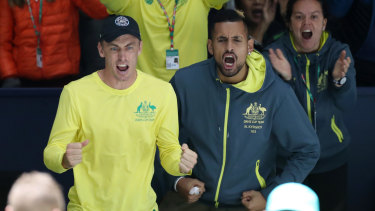 John Millman and Nick Kyrgios cheer on Alex De Minaur against David Goffin of Belgium at the David Cup.Credit:Getty

"It's a lot of responsibility and pressure on them because this is the most traditional, historic team event in our sport. There's a tremendous burden of history on them to make it right.

"But then, of course, scheduling was always an issue, for both ATP Cup and Davis Cup. In my opinion, which was an idea, that it could happen, was a merger between the two.

"And so I think it's still open for the future."

Many have questioned the merits of having three team events played within a four-month window.

Staged annually in September, the Laver Cup sees two teams from Europe and the Rest of the World face off in a different city and is the brainchild of Roger Federer's Team8 management company.

The ATP and the ITF, who run world tennis, have been involved in a bitter stand-off for years over the Davis Cup, which is currently being played in Madrid, and the announcement of the former's new-look event last year by Gerard Pique's Kosmos Group only strengthened the feud.

Subsequently, plans were revealed for this January's ATP Cup, in association with Tennis Australia, which will see 24 world teams compete for ranking points and prize money totalling more than $21.5 million.

Matches will be played in Brisbane, Perth and Sydney as a precursor to the Australian Open which gets underway from January 20 – just six weeks after the conclusion of the Davis Cup. 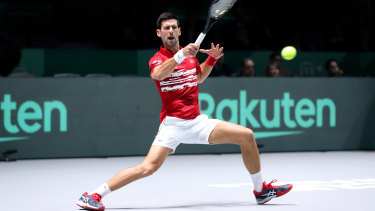 Novak Djokovic rips a forehand against Yoshihito Nishioka of Japan.Credit:Getty

But Kyrgios, who has previously admitted he prefers watching the NBA more than tennis, believes his sport desperately needs team competitions to maintain relevance outside the four grand slams.

"I Just think moving forward that is the way the sport has to go," he said.

"You look at the best sports in the world from an entertainment purpose – they are killing tennis.

"That is why the ATP and the ITF are trying to create more events because if they continue to go down the path they are right now the sport will die out.

"You look at the Laver Cup, you had 17,000 people cheering every night and being here in Madrid it's great.

"I just love being with this Australia team. TV viewers like it and I think people want to see more of it. It needs to happen more to move the sport on."

Kyrgios acknowledged the four grand slams will always be the pinnacle of tennis but said interest in the sport wanes due to the plethora of tournaments taking place around the world every week.

"From entertainment purposes I don't think too many people are going to tune in to watch a 250 event in Antwerp," he said.

"There has to be more events like the Laver Cup where there is 17,000 watching and there is more viewers than during a grand slam.

"Sport is entertainment at the end of the day and if no one is watching then tennis will die out."