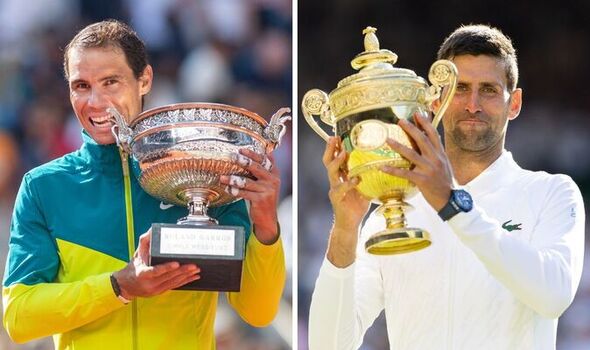 With the 2022 ATP and WTA seasons officially over, Express Sport is looking to crown the best players and matches of the year in an end-of-season tennis awards. Novak Djokovic and Rafael Nadal are once again rivals, going head-to-head as nominees for ATP player of the year while WTA world No 1 Iga Swiatek could see one of her matches crowned the best of 2022. You can have your say in Express Sport’s 2022 tennis awards.

The 2022 tennis season officially drew to a close as Djokovic ended the year by winning the last tournament on the ATP Tour calendar as he equalled Roger Federer’s record of six ATP Finals titles. Meanwhile, Carolina Garcia took home the biggest title of her career at the WTA Finals as the women’s tour wrapped up earlier this month – and both are now up for Express Sport’s player of the year.

While there are still plenty of exhibitions and the Davis Cup Finals to keep tennis fans happy, the off-season has officially started for the majority of players and Express Sport readers can now vote in the 2022 tennis awards in a year that saw Rafael Nadal make history by winning two Grand Slam titles to reach a new record of 22 overall.

The 2022 ATP Tour season also saw the youngest-ever world No 1 crowned in Carlos Alcaraz, while his top-ranked counterpart on the WTA Tour enjoyed the most dominant season in years as she won eight titles and went on a 37-match winning streak, the longest stretch of victories this century.

It comes as no surprise that Nadal, Alcaraz and Swiatek are also up for player of the year, while Casper Ruud joins as the fourth and final ATP nomination after reaching finals at the French Open, US Open, ATP Finals and Miami Open. World No 2 Ons Jabeur is also up for WTA player of the year after reaching two Major finals at Wimbledon and the US Open as well as winning her biggest title in Madrid, while French Open runner-up Coco Gauff rounds out the list of WTA nominees.

There is British representation in the breakthrough player categories with Jack Draper nominated in the ATP category after rising from world No 265 to No 41 this year, while Harriet Dart reached a career-high of No 84 after making the Indian Wells last 16 and earning her first-ever top 10 win over Daria Kasatkina at the US Open. Paris Masters champion Holger Rune is also up for ATP breakthrough after rising from No 103 to No 10 this year at the age of just 19.

Ben Shelton gave up college to turn pro this year after earning his first top 5 win at the Cincinnati Masters this summer in what was his second ever tournament, and he has already cracked the world’s top 100 just three months after becoming a pro. On the WTA side, Beatriz Haddad Maia has been nominated after winning back-to-back titles in Nottingham and Birmingham, cracked the top 15 and became one of nine players to defeat world No 1 Swiatek this year en route to her first WTA 1000 quarter-final.

20-year-old Qinwen Zheng rounds off the list as she made her Grand Slam debut in Australia this year before reaching the second week of French Open, while she also earned a top five win over Ons Jabeur, made her first WTA Tour final in Japan and hit a career-high of No 25 in the world while still a teenager. And the matches of the year include some Grand Slam epics on the men’s side while Swiatek boasts two of three nominated WTA clashes alongside Serena Williams’ last-ever professional win over then-world No 2 Anett Kontaveit at the US Open.

Express Sport readers now get to have their say with the chance to crown their champions in each category by voting in the above poll to see whether Djokovic and Nadal really did have a better year than world No 1 Alcaraz, or if Garcia’s rise ends up being more impressive than Swiatek’s winning streak.