Paris: For two sets and more than two hours at the French Open on Monday (Tuesday AEST), Novak Djokovic found himself being outplayed by a 19-year-old opponent from Italy making his grand slam debut.

And yet, to hear Djokovic tell it afterward, he had the kid right where he wanted him. Which turned out to be true. 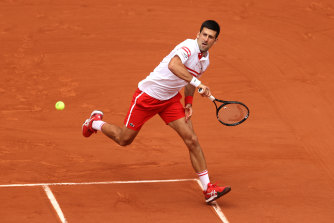 But 13-time French Open champion Nadal took eight games in a row and, after a blip in the second set, resumed his excellent play and closed his 7-5, 6-3, 6-0 win on another eight-game run.

“He played better. That’s all there is to say,” Sinner summarised.

About the only thing that bothered Nadal down the stretch: He complained to the chair umpire that the stadium’s artificial lights shouldn’t have been switched on while there was still sunlight.

“They say it is because of the TV,” Nadal said. “But my answer is: We used to have TV before we had the lights on here in Roland Garros. I saw plenty of matches here — and from the TV, the quality of the image was great without the lights.” 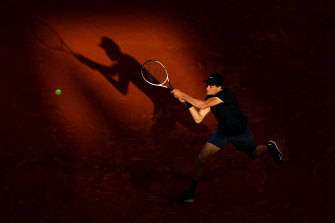 Djokovic’s 49th major quarter-final will come against another Italian, No. 9 seed Matteo Berrettini, who advanced without needing to swing his racquet Monday.

The man Berrettini was supposed to face, Roger Federer, withdrew Sunday in order to let his surgically repaired right knee and the rest of his 39-year-old body recover with an eye to Wimbledon, which starts June 28.

Just as Nadal vs Sinner was a rematch from last year in Paris — Sinner also served for the first set in that one before losing in three — Nadal will play No. 10 seed Diego Schwartzman next in a reprise of a 2020 semi-final. 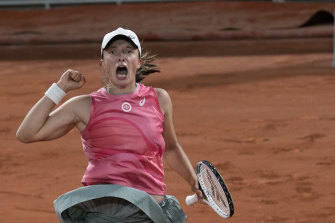 Earlier, 17-year-old American Coco Gauff became the youngest player since 2006 to reach the women’s quarter-finals at a slam by overwhelming No. 25 seed Ons Jabeur 6-3, 6-1.

Swiatek, at No. 8 the highest-seeded player left in the women’s draw, eliminated Marta Kostyuk 6-3, 6-4 and has won 22 consecutive sets at Roland Garros.

Gauff, Krejcikova and Sakkari are three of the six women making grand slam quarter-final debuts, the most at any major in the professional era.