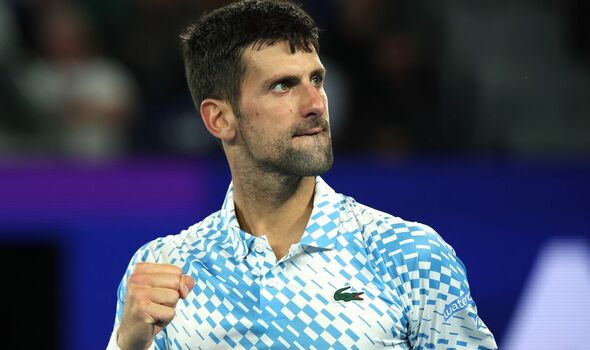 Novak Djokovic defied an Aussie heckler to send Andrey Rublev home and reach his 10th Australian Open semi-final. The Serbian superstar complained to British umpire James Keothavong about the fan during his record-equalling 26th consecutive win in his most successful Grand Slam.

The nine-time champion was deported from Australia last year. And the spectator in the Rod Laver Arena repeatedly cried out: “Send him home Rublev, send him home”. Djokovic first pleaded: “Can you tell these drunk guys to shut up?”

At the end of 1st set, the Serb said to Keothavong: “I don’t mind if he is supporting him. But for three or four times in a row, he has said things about me”

Djokovic raced to another convincing victory 6-1 6-2 6-4 in just over two hours but it is not the first time he has faced a hostile crowd. He got four hecklers dressed as “Where’s Wally” thrown out of his second round win.

On the court, he broke No.5 seed to lead Rublev 3-1 in the 39-minute first set after the Russian served a double fault and the outcome was never in doubt. Rublev saved four set points before losing the 44-minute second set and was broken in the first game of the third set for the fifth and final when Djokovic hit through him at the net.

The Serb was disturbed during his service action by a Serbian supporters only two points from victory. Keothavong said: “Please. The players are here for you. Please respect them.”

It did not delay the No.4 seed long as Rublev slapped a forehand into the net on his first match point moments later. Djokovic did not face a break point – and has only been broken three times in his first five matches here.

The No.4 seed has won the title on the previous nine times he has reached this stage at Melbourne Park.

He has also equalled Andre Agassi’s Open era record of 26 consecutive wins in the Australian Open. And he extended his winning streak in Australia to 38 matches with his last defeat to Chung Hyeon in the fourth round in 2018.

He now faces Tommy Paul in Friday’s semi-final. He is two wins away from equalling Rafa Nadal’s male record of 22 Grand Slam titles.

Rublev, who beat Dan Evans on Saturday, looked flat after his five-set win over Holger Rune in the last round. He has now lost all seven of his Grand Slam quarter-finals.