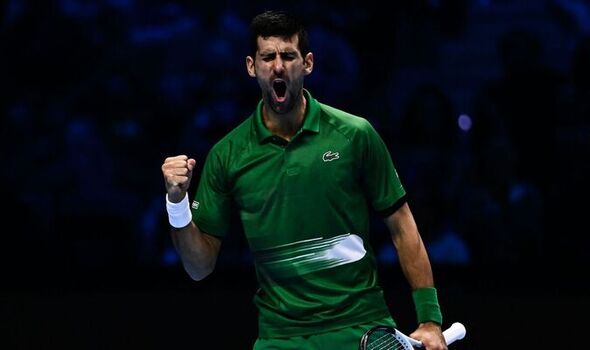 Novak Djokovic admitted he was “relieved” after ending his season by defeating Casper Ruud 7-5 6-3 to win a sixth ATP Finals crown, equalling Roger Federer’s record. The world No8 experienced a season like no other as he was banned from the Australian Open and US Open after issues with his vaccine status and admitted he was ready for a break after being made to wait “on the needles” all year.

Djokovic capped off his 2022 season by winning the ATP Finals title for a sixth time to tie Federer’s record. It was his first victory at the year-end championships in seven years and the 35-year-old admitted the win was even “sweeter” given how long he had to wait.

And it was made even more impressive following the lows moments he experienced this season, as the Serb was left unable to play the Australian Open, US Open and four Masters 1000s as a result of his unvaccinated status as he was often made to wait until the last minute to learn his fate. Asked whether his hardships had made the title win an even bigger deal, Djokovic said: “Huge.”

After starting the year in a government detention hotel in Melbourne before he was deported on the eve of the Australian Open, the 91-time title winner said he felt relieved to end the year with a win and get some time off. He continued: “I probably talked about this season and how unusual it is 1,000 times so I won’t repeat it when most people who follow tennis know. It’s just a big relief and satisfaction.”

JUST IN: Roger Federer weighs in on chances of coaching after retirement