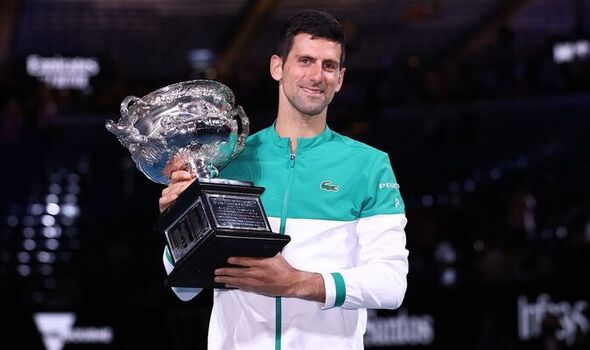 Novak Djokovic has been told that his return to the Australian Open was the “most important news” as his ban could have jeopardised the GOAT race. The world No 5 recently had his three-year ban on entering Australia overturned and Mats Wilander has now claimed that the debate over who was the greatest male player out of Djokovic, Rafael Nadal and Roger Federer would have been “irrelevant” if he was stopped from playing.

Djokovic was deported on the eve of the Australian Open at the start of this year after having his visa cancelled twice, and was automatically barred from the country for three years as a result. The Serb has since had the ban removed by the country’s current Immigration Minister and will be back at a Grand Slam for the first time since July, after his vaccine status also saw him prevented from playing the US Open.

And the 35-year-old has now been told just how significant the bans were, as a former world No 1 claimed that the GOAT debate would have become redundant if Djokovic was left unable to compete beyond his ordeal in Australia last year. “We are in the middle of a battle between the Big Three for the honour of the best of all time,” Mats Wilander told Eurosport.

The seven-time Major winner claimed that it therefore made the government’s decision to overturn Djokovic’s ban the “most important news” for tennis since the sport was shut down during the pandemic. The 58-year-old continued: “The number of Grand Slams would have become completely irrelevant if Novak hadn’t been allowed to play anymore.”

Wilander also explained why he thought the GOAT debate was a valuable argument in the sport, with Djokovic trying to overtake his long-time rivals Nadal and Federer. “Most would really like to know who we can call the number one of all time. That’s also important for the press. The place that we as a professional sport get in the media will, I think, be given by the return of this race or its revival massively upgraded,” the Swede added.

Djokovic will be seeking a record 10th Australian Open title in January, which would also help him tie Nadal’s record of 22 overall Grand Slam titles. Both men surpassed Federer’s record of 20 this season after starting the year on a three-way tie, with the Spaniard winning two more to set a new record of 22 while the Serb won his 21st and Wimbledon.

Wilander said the “three opposing playing styles of the trio, which emerged at different times” made their rivalry so special, and doubled-down on his claim that a three-year Australian Open ban for Djokovic would have voided the Grand Slam race. “Roger pushed the boundaries, then Rafa pushed him before Novak came on stage to spoil the party,” he explained.

“If he hadn’t been allowed into the Australian Open now, the history of our game would have been curtailed in a way.” Nadal will be the defending champion when the players return to Melbourne for the first Major of 2023, but Djokovic has won the last three editions that he has been able to play in 2019, 2020 and 2021, meaning January’s Australian Open is already an interesting tournament for the race to the most Grand Slam titles.