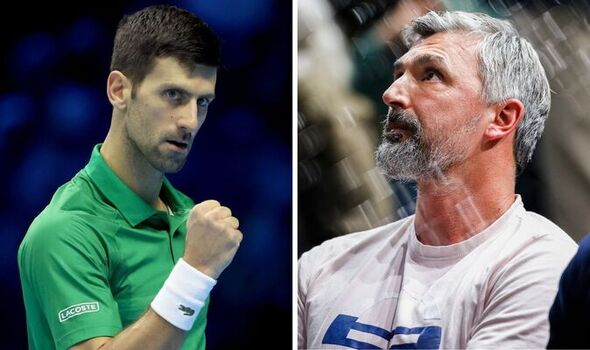 Novak Djokovic’s coach Goran Ivanisevic has reminded fans that his charge likely would have been fighting for the world No 1 spot if his Wimbledon ranking points counted. The Serb is bidding to win a record-equalling sixth ATP Finals title as he faces Casper Ruud in the final match of the season, and he has been praised for the “remarkable” achievement of even making it to Turin having played just ten tournaments.

Djokovic and Ruud are facing off in the final of the ATP Finals in what is the last match of the 2022 season. The world No 8 is bidding to win his sixth title while the Norwegian is looking for the biggest title of his young career, and he has been reminded that it will be a big ask to try and defeat Djokovic as the 35-year-old should have been ranked higher than he currently is.

The Serb was left unable to play two Grand Slams and four Masters events this year over vaccination entry requirements in Australia and North America, and also missed out on 2,000 points for winning Wimbledon when the ATP stripped all ranking points on offer at the event. And Djokovic’s coach has been quick to remind people that the 21-time Major champion would be up near the top had he received the points.

Djokovic is currently ranked four spots lower than his ATP Finals opponent, but Greg Rusedski told Prime Video that the ranking was one of the first things his coach – a former world No 1 himself – addressed. “I actually saw Goran Ivanisevic in the hallway and he’s like, ‘If Novak won this and got his points from Wimbledon he would be No 1 in the world right now,’” the retired Brit revealed.

JUST IN: Roger Federer weighs in on chances of coaching after retirement

“So he wants to make a statement. He says look, Alcaraz might be No 1 but I’m the best.” And fellow former British pro Annabel Croft said that she believed Ruud was well aware that the five-time former ATP Finals champion was playing at a level well above his current No 8 ranking as she praised the Serb for managing to qualify for the top-eight event having played so few tournaments.

The former world No 24 added: “He knows that really Novak Djokovic probably, possibly would have been world No 1 had he been able to play the two Slams. It’s remarkable that he made it here on merit, not just because he won Wimbledon but he would have won this event anyway having played just ten events.”

And Ruud himself has already confessed that he feels like the underdog ahead of their fourth career meeting, despite being the higher-ranked player with two Grand Slam finals under his belt this season. “He’s a player that doesn’t have many weaknesses at all,” the nine-time title winner said of his opponent.

“I’m sure he will also feel a little bit of pressure. There’s a lot on the line. And let’s see, ranking-wise I’m maybe ahead of him, but I feel like the underdog.”