When you’re hot, you get a lucky break even on your bad days. And Nick Kyrgios is hot as the US Open hurtles into its second week.

Fresh off a resounding four-set victory over defending US Open champion Daniil Medvedev, Kyrgios has become both a fan favourite and emerged as a strong pick to win it all at the Billie Jean National Tennis Centre in Queens. 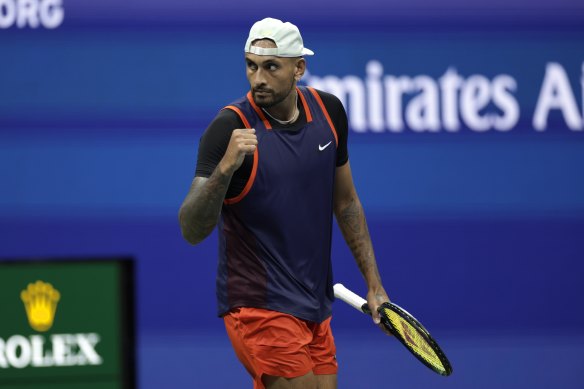 Nick Kyrgios has reached the quarter-finals in the singles draw at Flushing Meadows.Credit:AP

While Arthur Ashe Stadium is basically sold out for the rest of the tournament, so ticket sales cannot serve as a barometer of his appeal, there are other more nuanced measurements. The tournament chose to put the 23rd seed’s quarter-final match against little known 27th seed Karen Khachanov on Tuesday (Wednesday AEST) in primetime at night while relegating the higher-seeded Matteo Berrettini (13th) and Casper Ruud (5th) to the heat and humidity of the afternoon.

And when Kyrgios played doubles with Thanasi Kokkinakis on the Grandstand on Tuesday (AEST), the stadium was packed, even as Rafael Nadal was battling against Frances Tiafoe on Ashe.

The doubles match is where the bad news comes into play: Australia’s Special K team won the first set handily but then blew leads in the second and third set, losing both in tiebreakers. In the finale, Kyrgios lifted a gorgeous lob for a winner to give the duo a mini-break at 8-7 before they dropped the final three points in a hurry to Lloyd Glasspool and Harri Heliovaara.

Kyrgios played fine throughout but without the intensity and focus he brought to his singles win over Medvedev. There were moments of jocularity, where he and his buddy were laughing and smiling between points, but also moments of frustration – and while Kokkinakis was frequently a calming influence at those spots, Kyrgios did smash his racquet to the ground in the second set after frittering away a match point.

Kyrgios received a warning for that display, but also raucous cheers from the crowd, which seems to view him as a source of tweeners and tantrums even as he has strived for a new maturity and discipline throughout his run on the singles side.

The press also still zeroes in on the emotional side of Kyrgios’ performances. The New York Post headline after his win over Medvedev was “Nick Kyrgios berates himself, plays brilliant in US Open upset that had it all” while the New York Daily News wrote “Nick Kyrgios upsets 2021 champ Daniil Medvedev at US Open, discusses mental state”. But Kyrgios is constantly discussing his mental state because all the reporters who got called on in the press conference focused exclusively on that aspect and not on his play. (The Post also ran a photo of him smashing a racquet during that match.)

But Kyrgios has a chance to bury the lead on those stories if he continues to win in Queens. In the quarter-finals, he faces the hard-hitting Khachanov, whom he bested in their last match, a brutal five-setter at the 2020 Australian Open where the last four sets all went to tiebreakers.

And then there’s that lucky break mentioned up top: while Kyrgios was losing in doubles, Tiafoe was stunning Nadal and the crowd on Ashe, with a crisp four-set win over the 22-time grand slam winner. That bodes well for Kyrgios.

If he beats Khachanov he’ll face either Ruud, whom he beat in straight sets on the hard courts at Indian Wells earlier this year, or Berrettini, who looms as the largest remaining obstacle. They only played once and Berrettini won, but it was three years ago and on grass. Berrettini, like Ruud and, of course, Kyrgios, has also been to a grand slam final. With Nadal out, the player who will emerge from the other half of the draw to the final will lack even that experience.

Nadal had beaten Kyrgios six of the last eight times they played, while the leading candidates to reach the final on that side now include Andrey Rublev, whom Kyrgios trounced on the hardcourt in Miami this year; Carlos Alcaraz, who has never faced Kyrgios and who – for all his talent, firepower and moxie – has never gone deeper than a quarter-final at a grand slam; and now Tiafoe, who lost to Kyrgios in Washington DC this summer.

While the American Tiafoe, and perhaps the rising star Alcaraz, would have the crowd on their side, Kyrgios is likely to be a fan favourite in the rest of his showdowns. And while it’s tough to call anyone the definitive favourite in such a wide open field, Kyrgios has won more matches than anyone since mid-June, making him the hottest player on the tour at the most important moment in his career.