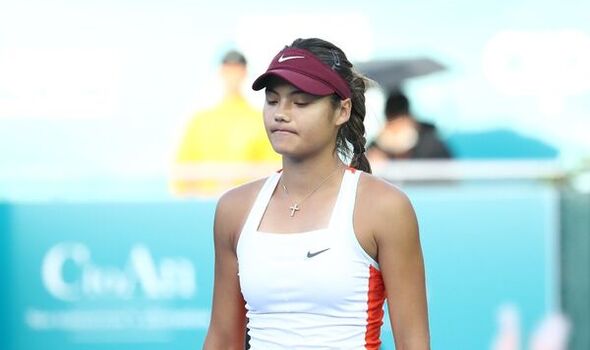 Emma Raducanu has ended her season – and pulled out of next month’s Billie Jean King Cup in Glasgow – because of a right wrist injury.

The former US Open champion has been suffering from the injury for a couple of months. The world No.76, who has started working with Andy Murray’s former fitness coach Jez Green,  now plans to return to action at an exhibition event in Abu Dhabi in December before heading to the Australian Open.

Raducanu said: “It’s disappointing to get the news from the doctors that I won’t be ready in time, particularly with it being on home soil. I tried to do everything possible to get it ready in time, since my last tournament I’ve been working every day on physical training and rehab. I’ve got confidence in my teammates and look forward to playing next year. “

Raducanu is also looking for her fifth new coach in 16 months after Russian Dimitry Tursunov ended their working relationship earlier this month. The former world No.20 has already teamed up with Olympic champion Belinda Bencic.

Tursanov said: “We didn’t agree on the terms and there were some red flags that just couldn’t be ignored.”

Meanwhile, Raducanu has come in third on the list of highest-paid female athletes for 2022 despite a year of mixed results. The 19-year-old became an overnight superstar when she won the US Open as a qualifier in 2021 but has not been able to pick up a title since though still found herself pocketing more money than world No 1 Iga Swiatek, who won eight titles this year alone.

Helped mostly by her endorsements, Raducanu came in third behind fellow players Naomi Osaka and Serena Williams in Sportico’s list of highest-earning female athletes with a total take-home of £22,690,117 ($26,200,000). Just £2.77m ($3.2m) of this has been from prize money, with the British No 1’s best result coming in the semi-finals of the recent Korea Open.