Emma Raducanu is leaving ‘no stone left unturned’ as she races against time to be fit enough for Wimbledon after retiring from the Nottingham Open on Tuesday.

Raducanu called a medical timeout in the early stages of her clash with Switzerland’s Viktorija Golubic after struggling with a pain in the left side of her abdomen.

The 19-year-old took painkillers and tried to continue but was forced to retire from the game entirely while trailing 4-3 in the first set. 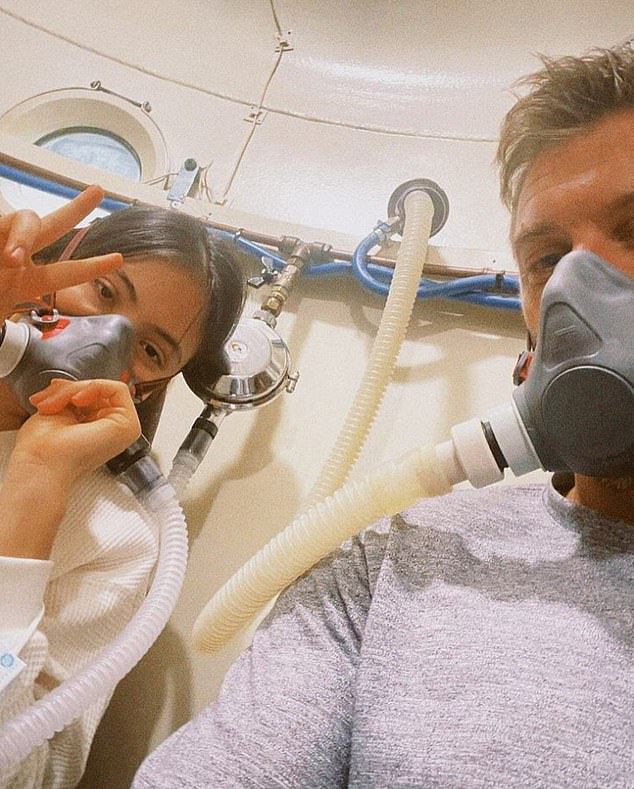 Raducanu – who was looking to make a mark in her first game back on British soil – has admitted to being unsure as to whether she will be fit enough for Wimbledon.

Raducanu revealed that she had been diagnosed with a side strain but said that a scan showed there was no long-term damage.

As a result, she is doing everything in her power to recover in time for the Grand Slam tournament at the All England Club.

She took to Instagram to share a photo of herself inside an oxygen chamber with the accompanying caption: ‘We’re trying, no stone left unturned’. 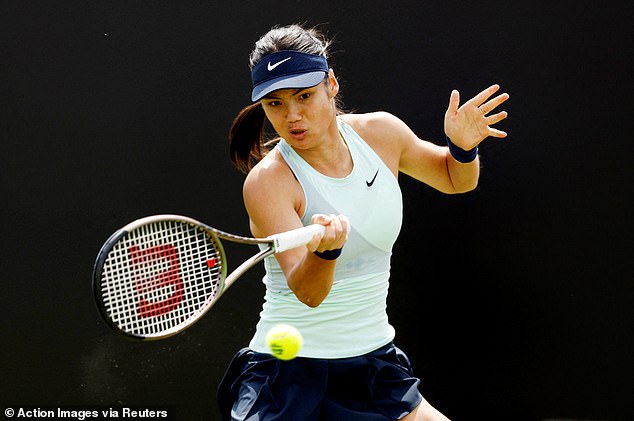 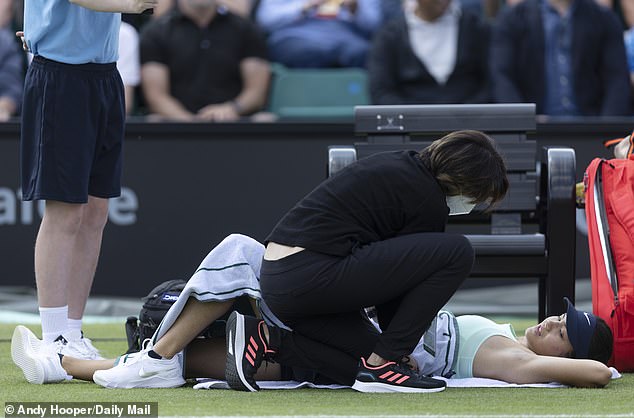 Oxygen is essential for the four main tissue types in the body and any injury will require oxygen to heal.

Typically, the body heals itself using the oxygen you breathe in but the process can be accelerated for athletes.

Competitors use chambers like the one Raducanu is pictured in to increase oxygen concentration. The oxygen is delivered through a tight-fitting mask as seen on the 19-year-old.

Raducanu is hoping the process – which usually takes about an hour and a half – will aid her recovery ahead of Wimbledon. 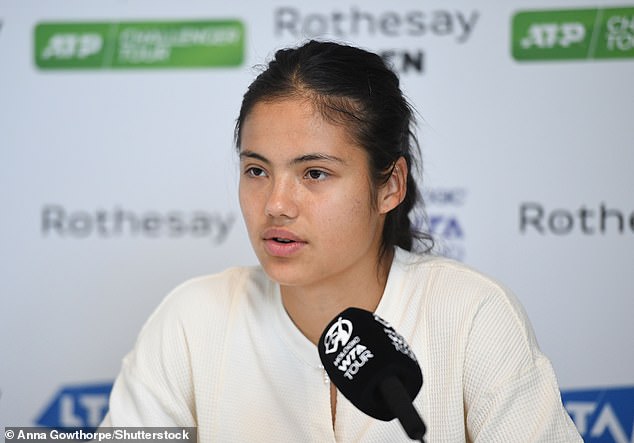 Speaking after her withdrawal, Raducanu said she was not sure if she would play at Wimbledon

Having been pictured just hours after her ‘disappointing’ withdrawal from Tuesday’s match, the 19-year-old was seen laughing and smiling in London.

The US Open champion appeared relaxed after suffering what she described as ‘an absolute freak injury’.

The images marked a stark contrast to previous photographs which showed the GB star looking downcast leaving the court.

Therefore, it seems likely that Raducanu will return to the tournament that she burst on to the scene last year with a sensational tournament run.

She will be looking to recreate such form after Wimbledon this year after struggling with injuries ever since she lifted the trophy in America.

The sun rose over Manhattan on September 11, 2021 and, just like the corresponding day 20 years previously, there was barely a cloud in the sky.

Of course this was no ordinary morning in New York, and on this date it never will be again. Not after the attacks on the Twin Towers of 2001 which have shaped the modern history of this city.

Around Midtown there were banners hung from lamp-posts commemorating what happened, and on the streets the passers-by were mainly either in uniform or in suits, going to and from events to mark the occasion.

Tennis seems an even more trivial pursuit than usual in this context but, within the parish of that sport, big things were happening later in the day. They would involve two young women who were not even born when the 2001 atrocity took place.

When the hour came ahead of the 4pm start, the Arthur Ashe Stadium was already nearly full.

The pageantry of American sports leans heavily towards the military, and at Flushing Meadows the national anthem is sung and soldiers unfurl a giant Stars and Stripes flag across the court. The players entered the arena, with Leylah Fernandez getting the slightly louder roar. 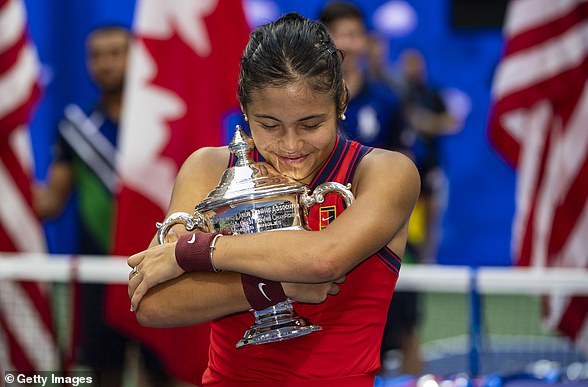 The atmosphere for the first all-teenage final since 1999, when Serena Williams had defeated Martina Hingis, was little short of febrile. After so much struggle and darkness around tennis in the previous 18 months, there was a sense that this was the sport breaking back into the light.

From the outset it was clear that neither player was going to be cowed by the scale of the occasion and the biggest crowd in tennis, although it was Emma Raducanu who started the more assured.

And at 5–4 it was the Brit who struck the first decisive blow. She earned herself three set points, only for all to be missed.

Back at deuce, she forced a fourth, with an inside-out forehand that screamed into the far corner. Then came a forehand winner down the line to claim the set 6–4.

In the moment, Raducanu whirled her arms around to turn up the volume in the vast stadium.

At 5–2 in the second set she was a game away from glory and then, twice, just a point away. Only then did she exhibit signs of nerves. Fernandez held serve, thereby asking the question of whether her opponent could serve it out at 5–3. 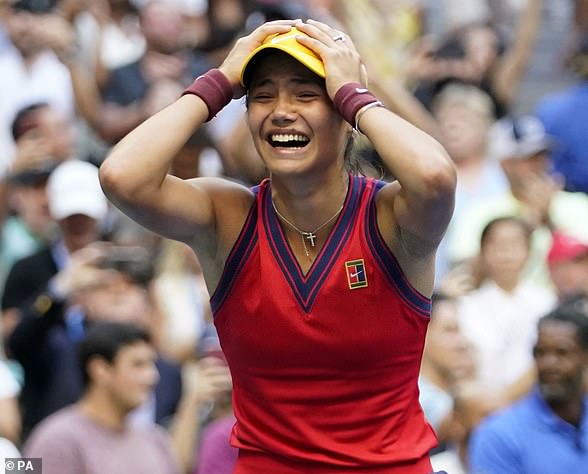 Points were traded to get to 30-all and the next one was dictated by the Canadian. In the course of losing it, while chasing behind the baseline, Raducanu lost her footing and scraped her knee along the concrete surface. Seeing blood seeping from the wound, she calmly walked to her chair to seek attention.

Five minutes and five seconds had passed by the time Raducanu served again, with Fernandez unhappy at the hiatus, and the Brit nervelessly came off better from an eight-shot rally.

Match point came again and as destiny called, Raducanu took her time. She went to her towel, briefly rubbed down, returned to her mark and threw the ball up against the New York sky.

Down came the racket with a relatively open face, sending the ball straight and true into the corner, flying way beyond the reach of Fernandez.

The Arthur Ashe Stadium erupted for the final time. It was just shy of 6.10pm and it felt like all the clocks had stopped. The miracle of New York was complete.

The victor fell to the floor, lying on her back with her hands covering her face. The loser sportingly walked round the net to meet her and embrace. 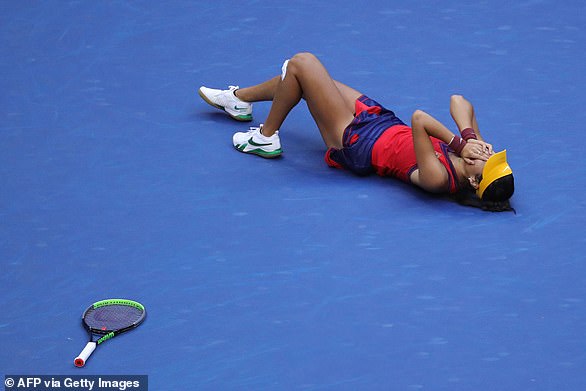 The victor on Arthur Ashe fell to the floor, lying on her back with her hands covering her face

Amid the cacophony Raducanu asked umpire Marijana Veljovic if she could leave the court to give her small team a celebratory hug up in the box — as if she would refuse.

Back on the court, amid swirling ticker tape, Billie Jean King presented her with the trophy and a cheque worth £1.8million — more than seven times her previous career prize money.

In the aftermath, as Raducanu sat on her courtside chair soaking it all in, the stadium sound system sparked up with Sweet Caroline, which the England football team had turned into the anthem of the English sporting summer. The small number of expats who had come along to support lustily led the singalong, and were joined by the player herself.

It was well past 10pm before all her obligations were finally done, and the tournament would lay on transport back to Manhattan. The team and some of those who had contributed to the fortnight jumped into a van and they rumbled down the expressway for the last time to an appropriate soundtrack.

‘After Emma had done all her commitments we all climbed into a minibus,’ recounted Tim Henman. ‘Someone put on Sweet Caroline and I’ve got this great video on my phone of everyone singing along to it.’

The Presidential Suite had been booked, and instead of venturing out into what was left of the night the small group tucked into champagne and a sushi feast, looking back on the astonishing events of recent weeks.

‘It was a very special night, and a real privilege to be invited and be there,’ said Henman. 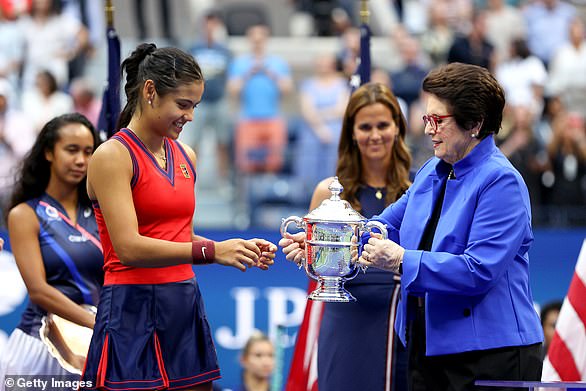 Billie Jean King presented the teenager with the trophy and a cheque worth £1.8million

At 4.45am he retired for the night, but the new champion was still going strong, adrenaline and excitement still coursing through her.

While she celebrated on, some of us were getting up, ready for a long stint at the keyboard.

The whole fortnight had been among the greatest things we could have been lucky enough to witness, something truly uplifting. But this was coupled with a slight frisson of anxiety, given the history of those who have achieved great things in women’s tennis at a tender age.

At the end of my sixth piece filed that Sunday for the Daily Mail was an attempt to distil the sense of the immediate past and the future: ‘Her values will be tested at times in the coming years — tennis does that to young people. But that can wait. Better now to reflect on two weeks that were spontaneous, innocent and utterly glorious.’ 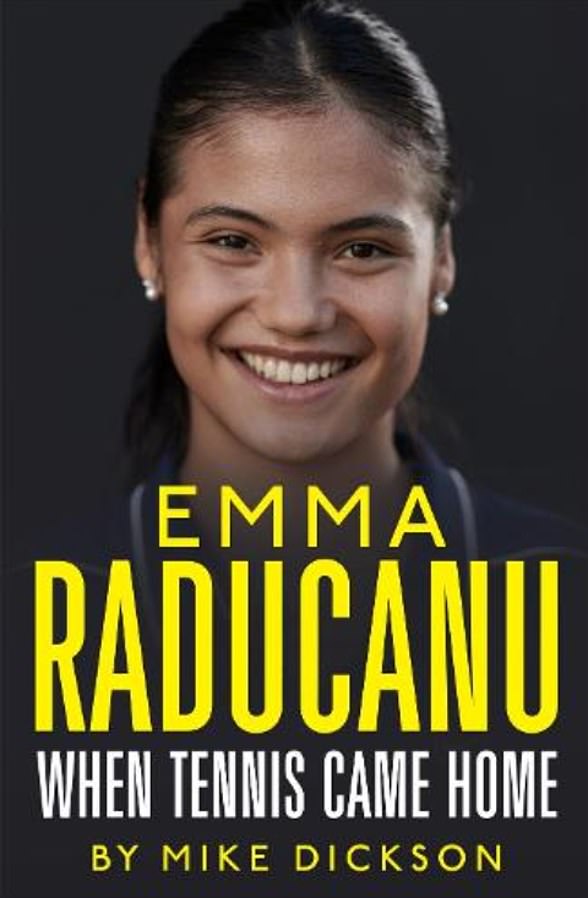