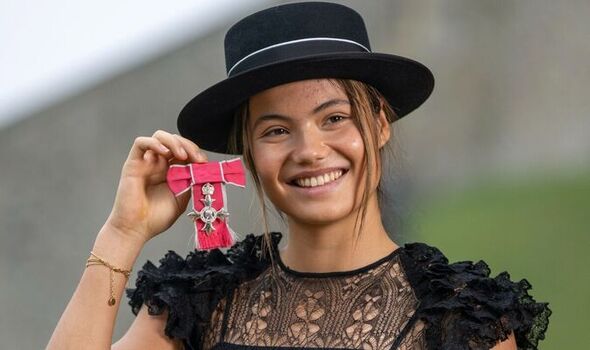 Emma Raducanu has been told why she doesn’t deserve to be a Member of the British Empire days after receiving her MBE from King Charles III during a ceremony at Windsor Castle. Former footballer Danny Murphy shut down the idea that the 20-year-old was an “inspiration” as he explained why he didn’t agree with the award after Raducanu was named in the New Year Honours List at the end of last year.

Raducanu officially became an MBE on Tuesday as she received her medal from King Charles III during an Investiture ceremony at Windsor Castle, almost a year after the late Queen Elizabeth II named her in the 2022 New Year Honour List with an announcement on the government website stating: “Emma Radacanu receives an MBE following her incredible US Open win.”

But the accolade has now been called into question as former Liverpool midfielder Murphy insinuated that the 20-year-old didn’t deserve to be an MBE. “I find it bizarre that someone would get an award for doing their job, and even if you do it very well,” he told talkSPORT on Thursday.

The 45-year-old also claimed that sportspeople only deserved awards for using their platform to help other people and causes after they had retired, rubbishing the idea that Raducanu had inspired dozens of young girls. Murphy said the British No 1 and other athletes would deserve an MBE “if you did get an award where you did give services to a sport and then afterwards you’ve finished and you used that platform to help others.”

JUST IN: Djokovic snubbed in ATP Awards as Alcaraz and young rivals nominated

The retired footballer used Sir Kenny Daglish as an example as he hailed the 71-year-old’s impact at Liverpool, continuing: “Kenny Daglish is a great example of somebody that didn’t just become a manager of Liverpool, he integrated himself. Especially after Hillsborough, the things he did, the hospital he built through him and his wife.”

And the football player-turned-pundit was having none of it when Jim White told him that Raducanu was an inspiration. “To who?” he retorted, as White explained: “To loads of young girls around the world that want to play tennis.”

Murphy doubled-down on his comments as he concluded: “That’s a small, tiny fraction of people. The point is, she’s doing her job.” Raducanu did get straight back to her job after receiving her MBE, as she spent the evening having a hit at the National Tennis Centre in Roehampton as she continued her pre-season training.

“AM MBE, PM NTC,” the 20-year-old wrote in an Instagram caption on Tuesday night as she shared a series of images from the ceremony and from her practice session. Following the ceremony, Raducanu also said: “It’s been great to receive my honour today from His Majesty the King – I feel extremely grateful.”