Wimbledon: Sue Barker hits back at John McEnroe over Brits

John McEnroe has told Emma Raducanu to “back up the hype” after her second-round Wimbledon defeat to Caroline Garcia on Wednesday. The 19-year-old suffered a 6-3, 6-3 loss on Centre Court as she has struggled to find the form that saw her win the US Open last year.

“Nerves play a part here, but she’s 19 years old,” McEnroe, who has been a vocal critic of Raducanu in the past, told the BBC. “She should, you know, be able to deal with that very quickly. “I suspect and I hope that some big things will happen in the future, but you got to start believing, you know, back up the hype.

“She needs to get in her comfort zone with whoever the people are around her. I don’t know who they are because she keeps switching teams as new coaches come in and out of the situation. That’s not a good thing.

“But she’s got to figure it out and let’s not forget, she won the US Open. Some slouch doesn’t win the US Open. She’s a great player. You got to look at it like that.” 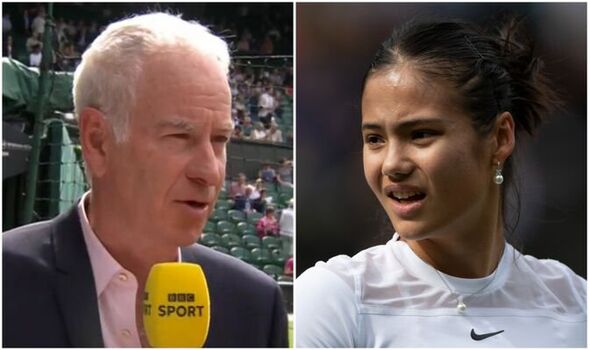 After her Wimbledon exit, Raducanu insisted that she has no pressure on her. “There’s no pressure,” she said.” “Like, why is there any pressure? I’m still 19. Like, it’s a joke. I literally won a slam. Yes, I have had attention. But I’m a slam champion, so no one’s going to take that away from me.

“Since the French Open, the biggest thing has been my time on court has been extremely minimal. I really did not train very much. That’s due to different sorts of niggles and things that have been lingering around.”

DON’T MISS:
Iga Swiatek edges closer Roger Federer and Novak Djokovic landmark with Wimbledon win
Sue Barker’s whirlwind romance with Sir Cliff Richard as she took him to ‘another world’
Rafael Nadal habits: Why does tennis star change his shirt so much? His rituals explained 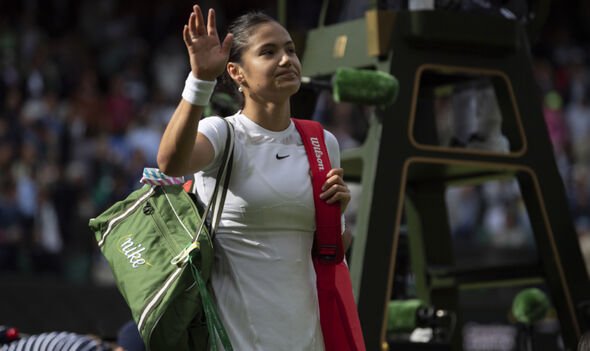 The teenager’s Wimbledon preparations were hampered by a side strain she suffered at the Nottingham Open, but McEnroe doesn’t agree with comments claiming that she has very little grass-court experience. “I’m not buying this idea that she doesn’t have experience [on grass],” he added. “She got to the fourth round at Wimbledon last year. She knows that Wimbledon is first strike tennis. I don’t mean to burst her bubble here, but we have to give her some time.

“She’s had injuries okay, I get it. Obviously you want to be healthy, but hopefully she’ll realise that a lot is expected and I’m sure she expects a lot from herself. She could do some big things.

“How did she have blisters? I don’t understand that part. She won the US Open, I’m gonna say it again – she won the US Open. But of course there are a lot of expectations coming from that.” Raducanu will next have a chance to defend her US Open title, which begins in late August.