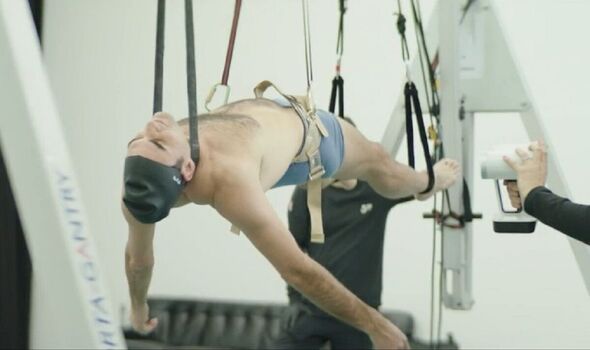 One of Roger Federer’s secret projects during his post-knee surgery break has been revealed in a new documentary. An anonymous portrait of the retired star was showcased in a five-month exhibition without anyone realising it was Federer. The 41-year-old strips down to his boxers for the unique “flying” sculpture as part of Ugo Rondinone’s “burn shine fly” installation at the 2022 Venice Biennale and shares the “vulnerable” feeling of being involved in the piece.

Portrait of a Champion shows how the 20-time Major champion was transformed into a flying figure – ‘cloud six’ – for renowned Swiss artist Rondinone’s exhibition in the Scuola Grande San Giovanni Evangelista church while attempting to stage a comeback from his ongoing knee injury.

It shows the retired former world No 1 in a way fans have likely never seen him before, as he strips down to his boxers and is suspended in a trapeze for Rondinone to be able to figure out the pose and dimensions for his sculpture. “Ugo said okay let’s hold on a second here, let’s really explain to Roger what we’re getting into,” Federer says in the documentary, sharing his experience of the process.

The Swiss star dons a swimming cap-style hat as he hands in the air while cameras whizz around his body to get a full scale mock-up of what the sculpture will look like, and he later has different parts of his body made into a cast to work from. “Of course you feel vulnerable,” he says afterwards.

JUST IN: Tsitsipas ‘lucky’ not to default like Djokovic after Aus Open outburst

“Okay I’m used to it when I’m on a tennis court but then I’ve got my racket which is like my hammer from Thor and when someone films you then, it’s no problem. But in your underwear, in a harness, hanging there it’s obviously a very different situation and that’s what I think was so unusual for me and even if it’s ridiculous you still think well it’s part of the creative process, this is what it’s going to take to make it a good end result.”

In the documentary, Rondinone also reveals that he initially said no when asked to commission a portrait of Federer. “It came as a surprise because I don’t do commissions, once I do a commission I go blank and I feel I have to fulfil something that’s not really mine,” he said, before explaining that incorporating the 103-time title winner in his existing work was the “elegant solution.”

He added: “I said why not include him as an anonymous figure in this project, not as Roger Federer. I will not promote him, I would like him to be one of seven neutral bodies who fly.” Federer later goes to see the installation at the 2022 Venice Biennale and admits that the anonymity relates to his life away from the tennis court.

“What I like about the anonymous part about it is it’s in my life as well. I like it sometimes when it’s anonymous as well, people don’t know where I am, don’t know what I’m doing,” he explained. But Federer admitted that he still enjoyed getting to go out and play tennis – something he didn’t realise he wouldn’t do again at the time of filming, continuing: “But then it’s nice to get back into the limelight, it’s nice to walk out on Centre Court, it’s nice to be famous sometimes or known or have the microphone for that matter.”

Looking back on the project, he adds: “Now having gone through it with Ugo and just seen it reflecting in his project at the end, the body’s flying and for him it was very much the end of the project and I felt a big sense of relief as well for him.” The documentary then reveals that during the entirety of the exhibition from April to September 2022, no one realised that cloud number six was a portrait of Roger Federer.

Portrait of a Champion is now available to watch at www.portraitofachampion.com