Tennis Australia is holding out hope of staging January's Australian Open with half as many spectators as normal – an "unbelievable" outcome – as the COVID-19 pandemic plays havoc with Victoria's major events calendar.

The sport's governing body is persisting with plans to stage January's major in Melbourne while operating "biosecure bubbles" in five cities to ensure the summer schedule – including the lead-up ATP Cup teams event – plays out as normal as possible. 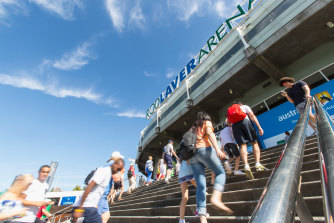 Australian Open organisers are hoping some form of crowds will be allowed at the 2021 event.Credit:Chris Hopkins

As Victoria manages the ongoing and unpredictable impact of the pandemic – the Victoria Racing Club is dealing with the reality of only “hundreds” or “low thousands” of people on course at Flemington for the Melbourne Cup carnival in early November – Tennis Australia aspires to cater for 50 per cent of the Australian Open's usual attendance, about 400,000 fans at the sprawling Melbourne Park precinct.

"But a lot's going to depend on the condition of the environment at that time."

Australian Open organisers began working through various scenarios for next year's event when the COVID-19 pandemic hit in March. They have settled on the "scenario two" option, which would include reduced seating due to social distancing and, almost inevitably, no international spectators.

Central to that plan is the rollout of quarantine facilities for players arriving from overseas. Furthermore, Tennis Australia is banking on staging the ATP Cup – a men's teams event set for its second instalment after the first version took place in Perth, Brisbane and Sydney last summer – in just one location.

The US Open in New York, the first major to be held since COVID struck, got off the ground last week with biosecurity measures in place. Noticeably, a lead-in event – the Western and Southern Open normally held in Cincinnati – was held at the same Flushing Meadows precinct.

Tiley said it would be an "unbelievable" outcome if conditions in Victoria allowed the Australian Open to happen at half capacity.

"I would be jumping up and down if that was the result," Tiley said.

"That's our aspiration. [But] anything is possible."

The 24-nation ATP Cup boasts $22 million in prizemoney and is a partnership between the ATP and Tennis Australia. It has a similar format to the rejigged Davis Cup, overhauled by the International Tennis Federation after signing a 25-year partnership with Spanish investment group Kosmos. The Davis Cup and Fed Cup events have been put on hold for 12 months.

Tiley was adamant the ATP Cup remained a key lead-in event for the Australian Open.

"We're working closely with the ATP, and the players," he said.

"It's a great event. Year one was such a smash hit that we would love to see more of it."

Other scenarios that had been scoped out by Australian Open officials included a broadcast-only event without spectators, playing the tournament in a different slot in the calendar or not having an Australian Open in 2021 at all.

The French Open moved from its traditional spring timeslot until late September and will start two weeks after the US Open finishes. French officials have revealed details for a limited number of spectators at Roland Garros.

Tiley wants to welcome the world's leading players to Australia for up to two months.

"Players, if they come to Melbourne they'll stay in Melbourne for 14 days and we'll create a bubble between the hotel, transport and the courts. They can't leave that environment.

"If they arrive in Sydney it will be the same thing.

"And then after those 14 days, by then we expect the borders to be open. Obviously if they're not, we compromise and come up with plan B.

"But the idea is that whatever city they arrive, they will quarantine for 14 days in that city. But it won't be sitting in a hotel room by themselves.

"We'll create a quarantine bubble that will be highly secure and monitored and measured and tested with a great of more frequency than the general public."