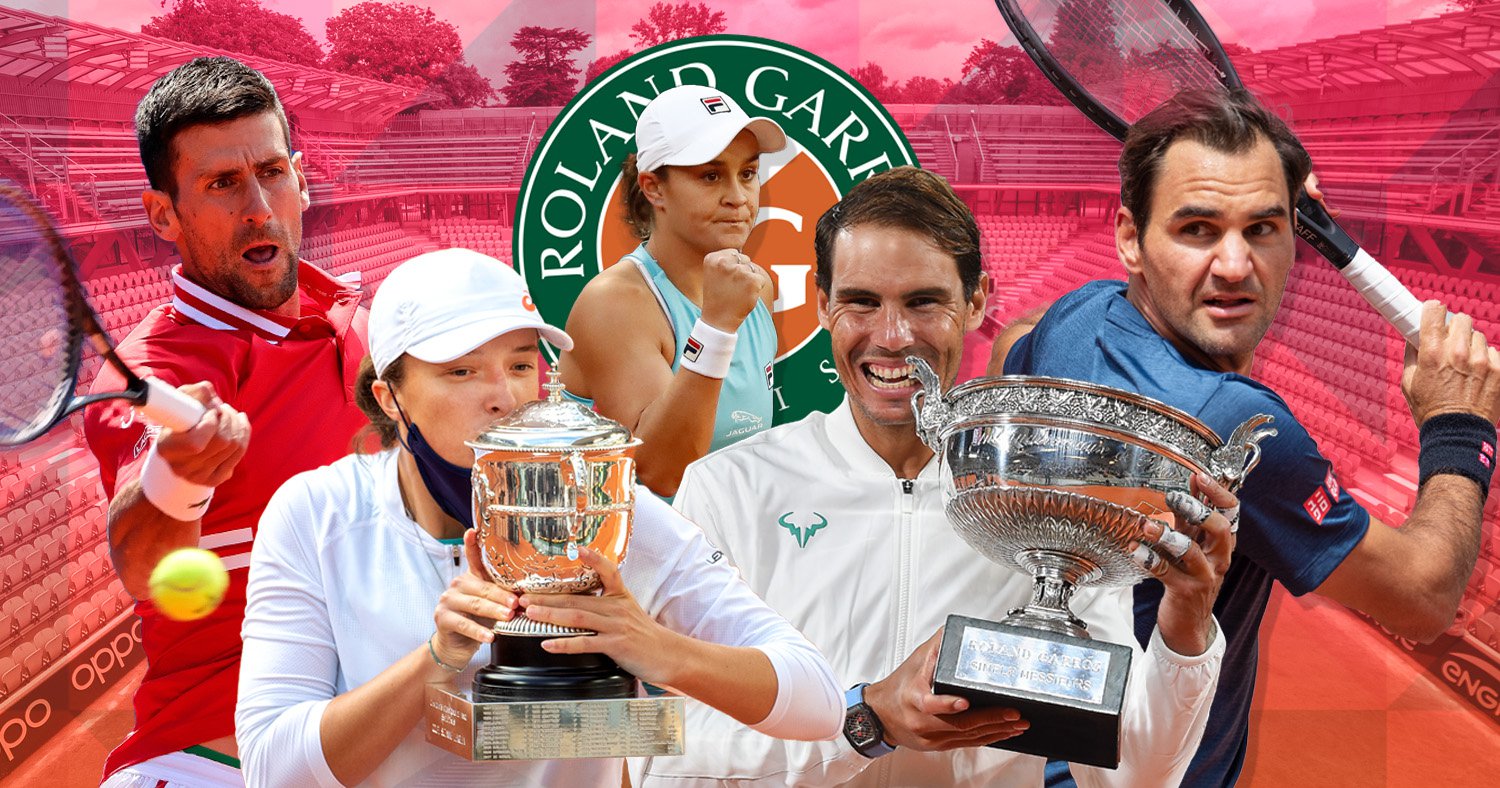 The French Open will get underway on Sunday, with last year’s champions heading into the tournament as the favourites.

Rafael Nadal, the man who hardly needs any introduction at this time of year, will chase a 14th title at Roland Garros – an astonishing figure that would equal Pete Sampras’s entire total of Grand Slam titles.

In the women’s draw, Iga Swiatek won her first French Open last season but arrives in Paris having won the Italian Open in Rome 6-0 6-0 in the final.

World No. 1 Ash Barty is also a defending champion of sorts. She skipped last year’s event amid the coronavirus pandemic but will hope to pick up where she left off after her sole major title in 2019.

Just as Barty and Swiatek are in the same half, Nadal’s greatest rivals, traditionally at least, Roger Federer and Novak Djokovic have also landed in his section of the draw.

That should give particular hope to the in-form Stefanos Tsitsipas, who couldn’t have dreamt of a better opportunity to reach a first Grand Slam final.

Don’t rule out Dominic Thiem, though. Despite his rusty form, he will no doubt be buoyed in the knowledge he will only have to beat one of the ‘Big Three’ to secure a second major title.

How has the men’s singles draw panned out?

Djokovic and Federer are both in the top quarter, meaning they could face off in the quarter-finals.

Knowing exactly where Federer is at is tough. He has lost his only tune-up match on clay and will be desperate to get some matches under his belt ahead of Wimbledon.

Djokovic seems a fairly safe bet for the quarter-finals, but Federer could easily be an early casualty at the hands of Taylor Fritz or Matteo Berrettini.

Nadal will surely join Djokovic in the semi-finals, even if there are some tricky potential obstacles in the form of Jannik Sinner, Aslan Karatsev and Andrey Rublev.

Djokovic vs Nadal
Thiem vs Tsitsipas

Tsitsipas will be the favourite to reach the final in the bottom half. He has landed in second seed Daniil Medvedev’s draw. Medvedev has made no secret of his hatred of clay and is primed for an early exit. Chile’s Cristian Garin could well be the man to profit from Medvedev bowing out but it’s hard to see him going beyond Tsitsipas.

There are question marks over Thiem’s form and he has a tough draw that includes the likes of Fabio Fognini, Casper Ruud and Alexander Zverev, but he is capable of playing his way into form during the tournament and will fancy his chances of contesting a third French Open final.

Cam Norrie and Dan Evans are the Brits involved. Norrie starts against Bjorn Fratangelo and could meet Nadal in round three. Evans meets Miomir Kecmanovic and is set for a third-round meeting with Alexander Zverev.

How has the women’s singles draw panned out?

Similarly to the men’s draw, it’s all a bit top heavy. Barty and Swiatek are joined in the top half by players of the quality of Coco Gauff and Garbine Muguruza.

Last year’s runner-up Sofia Kenin, who is, admittedly, out of form, faces former champion Jelena Ostapenko in round one, while former finalists Sloane Stephens and Venus Williams are also in the same half.

Like Federer in the men’s draw it seems unlikely that Serena Williams, who has struggled to muster wins in her brief appearances on clay so far this season, will go all the way.

Barty vs Swiatek
Sabalenka vs Andreescu

Williams is in a more open bottom half with the likes of the in-form Aryna Sabalenka and former US Open champion Bianca Andreescu.

Naomi Osaka, yet to go beyond the third round of the French Open, is also in the bottom half. She will not attend any press conferences during the event.

What are the pundits saying?

Mats Wilander told Eurosport: ‘My favourites to win Roland-Garros are last year’s champions – Rafael Nadal and Iga Swiatek. I think Iga has a good chance of repeating which is incredible to think. I think she is as big a favourite as Rafa is – in fact, she might be an even bigger favourite. I am a little concerned with Rafa but he obviously goes in as the favourite.

Boris Becker to Eurosport on Federer: ‘He can’t have the expectation to be one of the favourites for Paris. He was injured for too long and didn’t play for a long period of time.’

Becker on Djokovic: ‘He has changed his tournament schedule this year. The tournament in Belgrade is organised by his brother. Maybe it’s a kind of family support to play there – then I could understand it. Nevertheless, it is unusual because the top players are usually already in Paris the week before Roland-Garros and prepare for the tournament on site. Whether this unusual way was right, we will only see when he has played the first round in Paris and hopefully won.’

Chris Evert to Eurosport on the women’s draw: ‘Ash Barty has looked very good, she won a few tournaments. Sabalenka before has won tournaments and has surprised me, she has to be one of the favourites with her results and the fact that now she is harnessing her power now and being more consistent which is great. Ash Barty is special to me, I think she can just do it all – she has power, she has finesse, she can come to the net, she has got good weapons but has got good defence as well. Ash, Iga and Sabalenka – those are my top three.’