Jack Draper says he will take criticism from Novak Djokovic on board after losing to the world number one at Wimbledon on Monday. The 19-year-old put up a brilliant fight on Centre Court, but was beaten 4-6, 6-1, 6-2, 6-2 on Centre Court by the tournament’s heavy favourite.

Draper did not look overawed in front of the half-capacity crowd at the All England Club and made a brilliant start.

The British wildcard broke Djokovic before withstanding seven break points on his own serve to shock his opponent and take the first set.

However, after he got to grips with the slippery grass surface, Djokovic came roaring back with his impeccable serve and ground strokes making life difficult for Draper, who had drawn the toughest opponent imaginable for his senior debut.

Djokovic ramped up the pressure and reeled off three sets to earn a second-round tie against Kevin Anderson or qualifier Marcelo Barrios Vera.

The 34-year-old Serb, who is aiming to draw level with Rafael Nadal and Roger Federer on 20 Grand Slam titles by winning his third straight trophy in SW19, offered some pointers to his defeated opponent.

JUST IN: Murray vs Basilashvili LIVE: Wimbledon scores and updates 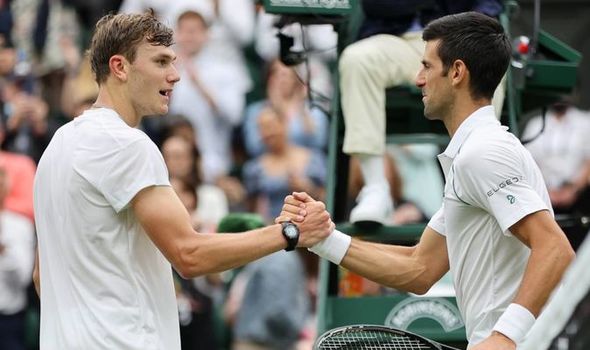 “Maybe his movement could improve I think,” Djokovic said.

“Probably can and should move a bit better. But he’s still young. There’s always room for improvement. But he’s got a very good base, I would say.”

Draper is ranked 253rd in the world and is only just beginning his senior career by playing in just his fourth ATP tournament.

The left-handed youngster came into the tournament in good form having performed well at Queen’s.

He beat rising star Jannik Sinner and Kazakhstan’s Alexander Bublik before losing to fellow Briton Cameron Norrie in the quarter-finals.

Stefanos Tsitsipas crashes out of Wimbledon first round

Johanna Konta opens up on Wimbledon withdrawal after Covid contact 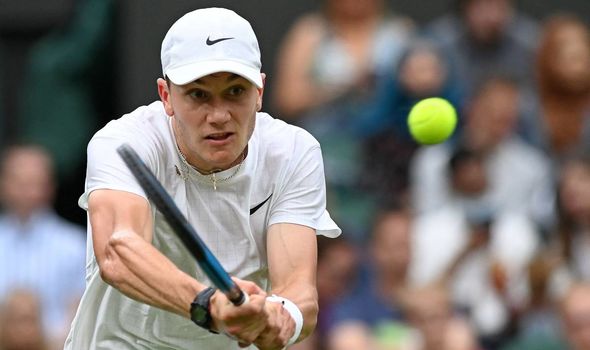 Draper was proud of his performance against Djokovic but admitted he still has a long way to go to reach the level of the reigning champion.

“Yeah, I definitely agree with Novak there,” he said.

“My movement definitely needs to improve. I thought he moved better than me today. That’s no wonder.

“I’ve got a lot to improve on physically, which I will do throughout the rest of the year.

“In the next few years, I think I’ll peak with my physicality at age maybe 22. My body has changed a lot over the last few years. It’s been quite tough for me.

“But I look to improve my serve, my forehand. I’ve got a lot of holes in my game still which can still go a long way.

“I look to come here in the future and show my improvements.”