Jannik Sinner says he is here to win and not just reach finals after the Italian teenager suffered defeat to Hubert Hurkacz in Sunday’s Miami Open final.

In February, Sinner became the youngest man since Novak Djokovic in 2006 to win two ATP titles and his appearance in the Miami final took him to a career-best ranking of 23 on Monday.

The 19-year-old was keen to focus on the positives after just missing out on his first Masters 1000 title to the Pole, who he occasionally partners in doubles. “When you’re 19 and playing finals, obviously it’s tough, and I wanted to win,” Sinner, who won the 2019 ATP Next Gen Finals, said.

“I was a bit nervous from the beginning of the match or already yesterday, but it’s normal because you really want to win. Today was not my day.

“It has been a good week anyway. But obviously I’m not here for making finals, I’m here to win tournaments. It’s going to be back to work and then we will see what I can do on the clay.”

The Italian was focused on building on his gains and was already looking forward to his next tournament.

“What I showed here (is) that I improved from the last tournament,” he said. “Obviously when you get a little bit of confidence it’s a little bit easier, but you have to work hard to go deep in tournaments, especially in big tournaments.

“For me, improvement is the most important thing.

“I still have to talk with my team why I lost, what they think, where we have to work, and then we will decide on which part of my game I have to improve.

“(It’s) back to work and now the clay season is on. So I don’t want to waste time today. I think I can learn many things. Next week already is another tournament.”

Sinner is staying grounded and says his calm demeanour on and off the court was due to his parents.

“They are working every day a simple job, they know what it means to work hard,” said Sinner, whose father is a chef and his mother a waitress in the same restaurant.

“They gave me this kind of mindset, always trying your best day after day and trying to not lose energy during your job.” 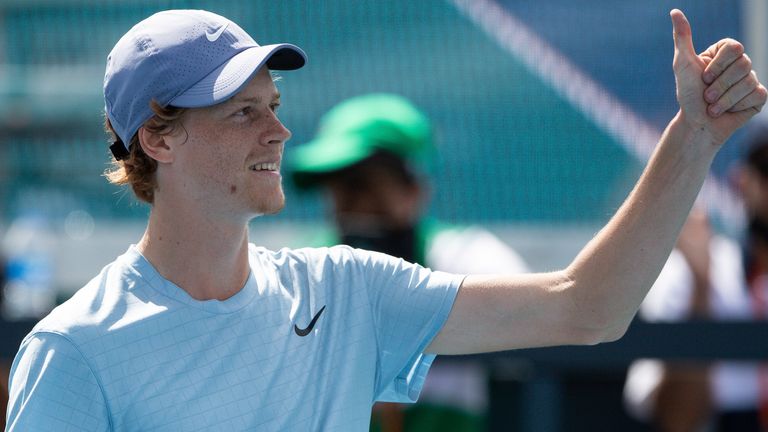 Sinner also believes the next generation of players are still playing catch-up with the ‘Big Three’ of Novak Djokovic, Rafael Nadal and Roger Federer.

“The next generation still has to show that they can beat the big three because obviously maybe they lose one or two matches, but the next generation that what I see is not ready yet to win against them consistently.”