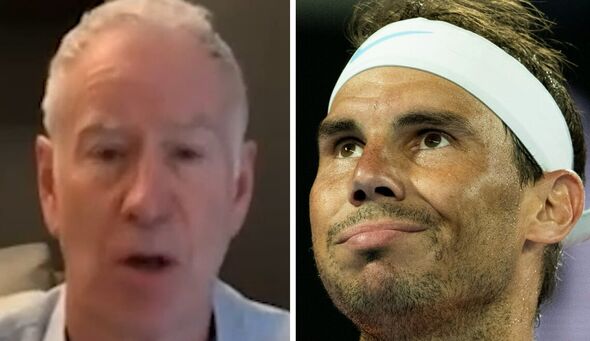 Tennis legend turned pundit John McEnroe has disclosed what he’s ‘heard’ about Rafael Nadal and his retirement plans after the Spaniard exited the Australian Open after suffering a muscle injury. The 36-year-old was defending the major title he won last year and had a medical timeout before falling to a shock defeat to world No.65 Mackenzie McDonald.

World No.2 Nadal leaned against the advertising hoardings in pain after struggling with his left leg which required medical attention during the second set. Despite completing the match Nadal lacked his usual power and lost 6-4, 6-4, 75.

Nadal has since been diagnosed with a grade two muscle injury in the psoas muscle of his left leg following examination and is expected to be out for six to eight weeks. The Spaniard returned to form at last year’s Australian Open after overcoming a chronic foot injury which threatened to end his career.

Despite winning two Grand Slam tournaments last year Nadal was forced to pull out of Wimbledon with an abdominal strain. After Nadal’s latest injury nightmare McEnroe spoke about what ‘he had heard’ about the record-breaking 22-time Grand Slam winner.

“Rafa, from what I’ve heard, wants to keep playing,” McEnroe told Eurosport. “You know, he loves the competition, he loves the process, and he loves the sport and we love him for that. But if the body doesn’t hold up and he feels like he can’t get to that type of level health-wise that he needs to, to win majors, then I think he’ll quit. The question is, when is that? So it is as early as the French, it’s as late as playing two or three more years.”

McEnroe believes that Nadal will aim to be fully fit for the clay court season and attempt to defend his French Open title in May. He added: “It really depends on how the body holds up, and then obviously he’s used to doing so well that if the results aren’t there for a consistent period of time, I would expect that he would stop playing then.

“If I was part of that team, especially if you’re not quite sure how the hip is reacting, sort of build up his conditioning and his confidence on his favourite service and then try to peak at the French Open. So that that would be what my guess would be at this present time.”

Watch every match from the Australian Open live and exclusive on discovery+ and Eurosport.