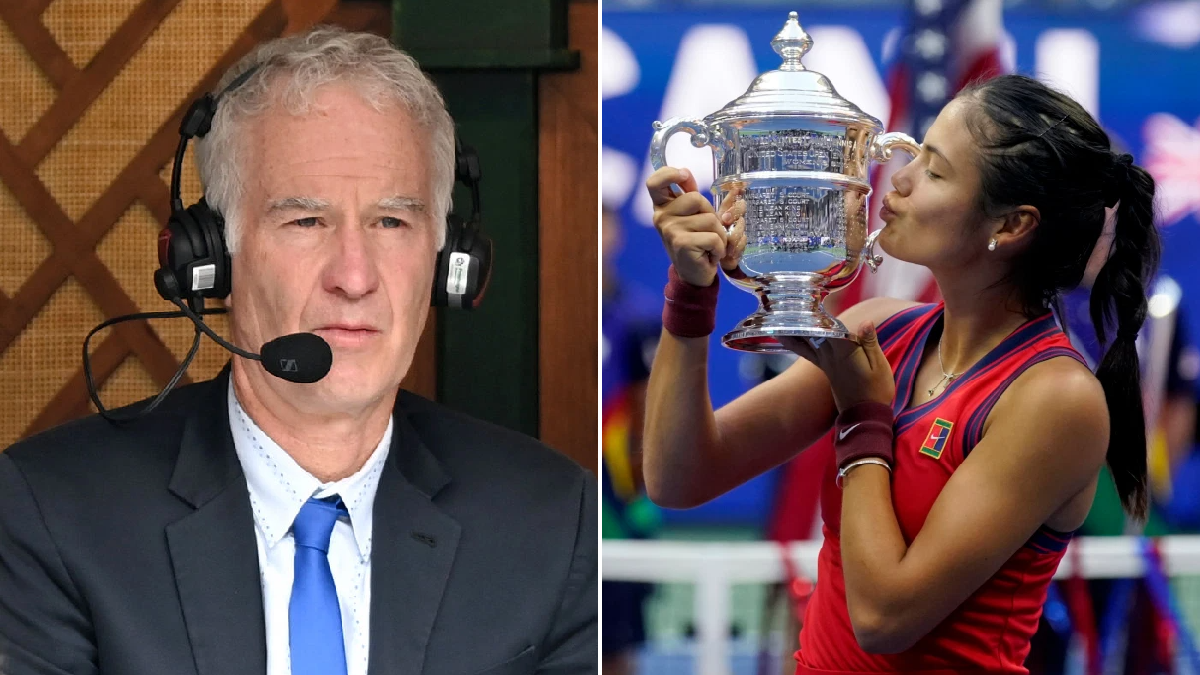 John McEnroe has once again defended the comments he made about Emma Raducanu’s mental strength following her withdrawal from Wimbledon despite the teenager going on to win the US Open.

The 18-year-old from Bromley became the first qualifier ever to win a Slam after seeing off Leylah Fernandez at the Arthur Ashe Stadium on Saturday, not dropping a single set over the course of her 10 matches and three weeks in New York.

Raducanu had also impressed at Wimbledon two months earlier, making the fourth round, though the British wildcard withdrew from her match with Ajla Tomljanovic after struggling to catch her breath and feeling dizzy.

McEnroe was on commentary duty at the time for the BBC and was criticised for claiming, without knowledge of what was going on, that the occasion had got the better of the youngster, saying it ‘just got too much’ for her.

The American tennis legend had also questioned Raducanu’s participation in New York despite her stellar Wimbledon run, saying: ‘Maybe she’ll get some wildcards. She’ll probably get one for the Australian Open but I’m not sure about the US Open.’

But the new British number one firmly put those comments to bed at Flushing Meadows, showing enormous mental strength and resilience to win the US Open, though McEnroe stands by his comments and insists they were ‘vanilla’.

Speaking for the first time since Raducanu’s victory, McEnroe told CNN: ‘I meant exactly what I said. I tried to relate it in a small way to my experience when I first went to Wimbledon also at 18.

‘I mean that was to me as vanilla as it comes… I was very supportive of her, I thought, at the time.’

McEnroe did also praise Raducanu’s win, adding: ‘I don’t think you could possibly do it any better than she did at the US Open. Are you kidding me? That’s insane. And that she’s been able to do this now there’s going to be obviously a lot more focus on it. It’s incredible.’

Asked about the criticism she had received in the wake of her Wimbledon withdrawal, Raducanu told Good Morning American on Monday: ‘I took away from that that for me it was more of a physical issue.

‘I think that to win a grand slam you need a lot of mental strength so I think the resilience part of it sort of speaks for itself.

‘I needed to go through all of that to win a slam, but physically I’ve still got a lot of work to do because I’m still very new to the game and I haven’t had that time to really develop.

‘But having played on the tour for the last four or five weeks I think naturally with each match and tournament I’ve played I’ve increased my endurance.

‘I think just the sheer amount of matches I played over the last four or five weeks, with each one I was building in confidence and with each one it gave me more and more of a free swing to go for my shots and be more aggressive.’