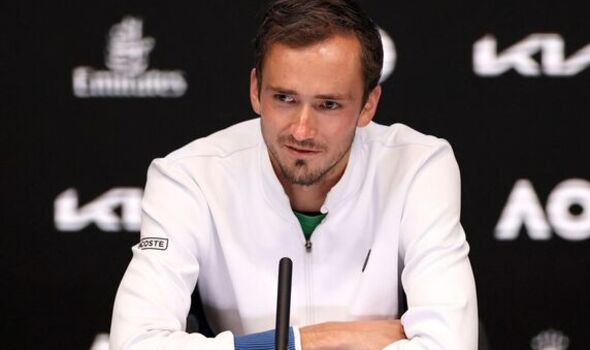 Kremlin Cup organisers are set to respond to Russian and Belarusian players being banned from Wimbledon by excluding certain nations from their own tournament. The event has taken place annually in Moscow since 1990, but in March this year, the ATP and WTA announced that the 2022 version would be scrapped amid the country’s invasion of Ukraine.

In a joint statement, the authorities said: “A deep sense of distress, shock and sadness has been felt across the entire tennis community following Russia’s invasion of Ukraine in the past week. The international governing bodies of tennis stand united in our condemnation of Russia’s actions.

“The WTA and ATP Boards have made the decision to suspend the WTA / ATP combined event, scheduled this October in Moscow.” Following that decision, Russian and Belarusian players were also made to compete as neutrals, with the national flags of both countries excluded from tournaments.

However, this month the All England Tennis Club went a step further by announcing players from the two respective nations would be barred from playing at Wimbledon this year. The decision has proved a divisive one, with Andrey Rublev slamming organisers, arguing they instead could have donated prize momney to Ukraine.

Novak Djokovic has also criticised bosses at SW19, while Victoria Azarenka has said that there should be consequences for the decision that she claimed “does not make sense.” According to Serbian media outlet Blic though, Russian tennis authorities plan to strike back by pressing ahead with the Kremlin Cup after all, but only inviting players from six nations.

As well as the players from the two countries being sanctioned, there would be invites to personnel from Kazakhstan, Armenia, Tajikistan and Kyrgyzstan. Not everyone in Russia agrees though, with former player Ekaterina Bychkova quoted as saying: “I don’t see what the purpose of this competition is. It will no longer be the Kremlin Cup but a kind of Spartakiad. Why would Medvedev participate in such a tournament? I don’t see what his motive would be.”

DON’T MISS:
Emma Raducanu bravely battles back to win first match since coach split at Madrid Masters
Emma Raducanu told what she needs to do to adjust to clay with French Open approaching
Boris Becker: How German went from tennis heartthrob to prison inmate

Blic also suggested the tournament could go on as originally planned anyway, were the conflict to end beforehand: “There is still a lot of time until October, when this tournament is being held, and everyone hopes that the war in Ukraine will end as soon as possible, that all athletes will have the right to compete unhindered.”

In 2021, the men’s tournament was won by home player Aslan Karatsev, who recently was seen practicing in a Wimbledon t-shirt. The women’s champion was Estonian player Anett Kontaveit.