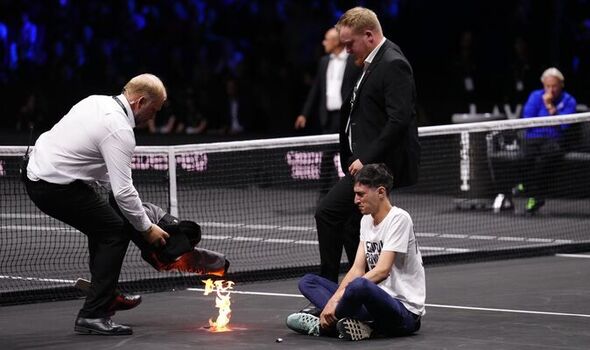 Fans at the Laver Cup were left shocked when play came to a momentary halt as a protester took to the court and set fire to themselves during Stefanos Tsitsipas’ match against Diego Schwartzman. The man in question was quickly dragged off the court before play resumed in the second match of the day.

There was a bizarre incident at the Laver Cup on Friday when a protester managed to get onto the court at the O2 Arena and set themselves on fire. Spectators in the crowd took to social media to remark that a man had brought a flare onto the court and started a small fire, getting his arm burned in the process.

Security quickly scrambled to put out the fire and remove him from the court. One staff member took his blazer off and stomped on it over the fire to put the flame out before several carried the man off. The protester in question wore a t-shirt stating “End UK private jets”.

Tsitsipas could then be seen asking the umpire if the court was okay to use. Court attendants poured water onto the affected area and wiped it up with towels. 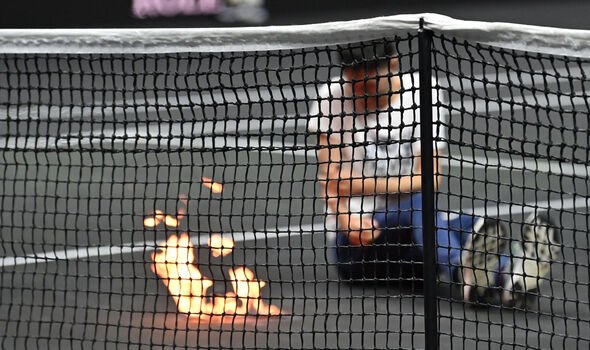 Roger Federer will play the final match of his career later on Friday at the Laver Cup, with the protester appearing to take advantage of the attention on the tournament to make the bold gesture.

Members of Team World including Tommy Paul and Felix Auger-Aliassime could be seen discussing the incident in their player area on the court a few game later. Both men mimicked the protester trying to pat the fire off his arm after setting the court on fire. 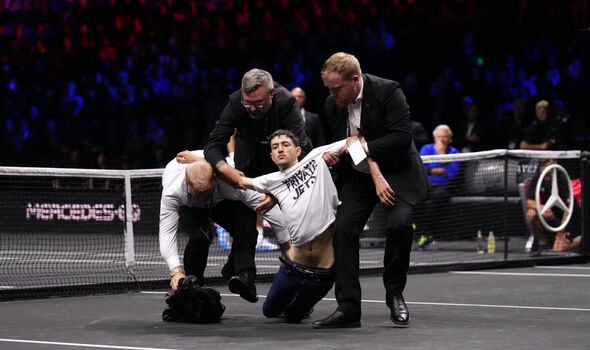 It is not known whether the man intended to set fire to his arm as well as the court. He could be seen screaming in pain and rapidly patting the flames off his arm after setting the Laver Cup’s iconic black court alight.

The Laver Cup has not yet released a statement on the matter.