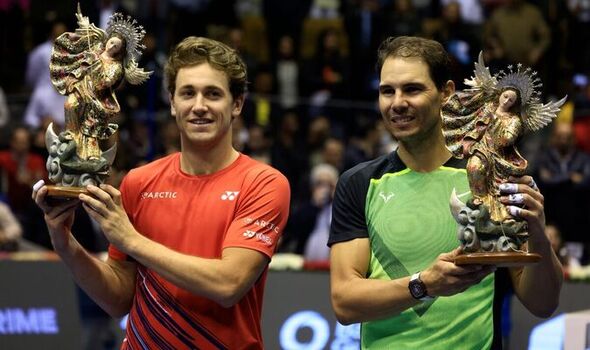 Casper Ruud has paid tribute to Rafael Nadal and his family while on a tour of exhibition matches across South America with the Spaniard. The world No 3 is a product of the Rafa Nadal Academy and has shared a heartfelt message thanking the 22-time Grand Slam champion for having such an influence on his career.

Nadal and Ruud are currently part-way through an exhibition tour in South America, having already visited the likes of Argentina and Ecuador. The two have a close bond on the tour with the Norwegian being part of Nadal’s academy in Mallorca, and this year faced off in what was Ruud’s first Grand Slam final at the French Open.

It was one of four big finals the 23-year-old reached in 2022, as he also became the runner-up at the US Open, ATP Finals and Miami Open, while reaching a career-high ranking of No 2 in the world and winning three titles. Following a career-best season, the world No 3 has now paid a heartfelt tribute to Nadal for his “spectacular” impact.

“You can learn everything from Rafa, from any type of shot to mentality and professionalism,” Ruud said during the pair’s stop in Quito for one of their exhibition matches. “When I arrived at the academy I was surprised by the intensity of each training session, and that has helped me to increase the intensity that I put into each practice.”

And the nine-time title winner was full of gratitude towards Nadal and his family as he continued: “Rafa’s team and his family are incredible. They have always been with me, and they do a spectacular job with a young community.”

Nadal’s former coach and uncle Toni is another figure who has been a key part of Ruud’s development at the academy in Mallorca, and the 61-year-old recently claimed that the Norwegian had the potential to become No 1 in the world after being one match away from the top ranking, just missing out when he lost the US Open final to Carlos Alcaraz.

“Casper Ruud, I remember when he came to the academy, he had a bad backhand because, in my opinion, he made bad movements with his legs,” Toni recently told Eurosport as he recalled the 23-year-old’s time at the Rafa Nadal Academy. “Now his backhand is good. Back then, I said he needed to change a little. Now watch what has happened with Casper.

“Every year, he has improved a little. I remember, when he came to the academy, he never thought that he could be No 2 in the world. Now, I have seen many of his matches and he is a very good tennis player. He can be No 1.”