Australian tennis greats are unsure what the future holds for the Davis Cup after welcoming the introduction of the ATP Cup as the sport's new showpiece teams' event, which will kick-off the summer. 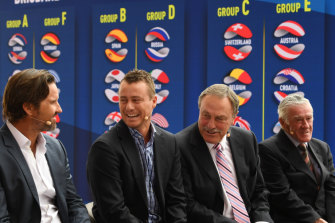 "This is a great event to be a part of," Hewitt said at the official draw in Sydney on Monday.

Few could have imagined Hewitt being so supportive of an alternative event in January when he fiercely opposed the radical changes to the Davis Cup format that will come into full effect in November.

For the first time in more than a century the Davis Cup – having shifted from the traditional home-and-away format for all rounds – will climax with an 18-team finals in Madrid from November 18-24.

The first ATP Cup, to be staged from January 3-12 in Sydney, Brisbane and Perth, will take place barely six weeks later.

Asked if he thought the Davis Cup could co-exist with the ATP Cup, Rafter said: "It's interesting isn't it. There's quite a few events going on now that are competing with Davis Cup, so Davis Cup's going to have its issues.

"Is there too many events going on for it to work? I don't know.

It's been tennis's biggest stars including world No.1 Novak Djokovic and Roger Federer driving the introduction of the ATP Cup, in addition to the ATP and Tennis Australia.

Somewhat sadly, Djokovic and especially Federer have been glaring absentees from the Serbian and and Swiss Davis Cup teams in recent years, having previously devoted most of their careers trying to win the competition.

Having ticked off Davis Cup from their bucket lists, it's now no longer a priority on their programs.

But the ATP Cup apparently is.

In a masterstroke from organisers, Djokovic, Federer and Rafael Nadal will all open their 2020 seasons in different parts of Australia, ensuring maximum exposure across the country.

Federer's Switzerland outfit will be in Sydney for the group stages of the ATP Cup, with Djokovic's Serbia in Brisbane and Spaniard Nadal's in Perth.

Rafter is convinced crowds in all cities involved will get behind the ATP Cup, as Perth did with the now-defunct Hopman Cup and likewise Queensland with the Brisbane International.

"Every city hosting this event, they've got at least six personalities there so it's going to work," Rafter said.

"All the players playing it — that's what's going to make the event. If the players don't play, it won't work.

"It's a lead-in to the Aussie Open and they've also given them a week break. A lot of players don't like to play the week before.

"You have enough prizemoney, you have the venues and the same conditions [as the Australian Open]. It's a no brainer ."