Home » Tennis » ‘No withdrawals from Team Serbia’: TA insists Djokovic not yet out of ATP Cup

Tennis Australia insists Novak Djokovic has not yet withdrawn from the ATP Cup, despite reports the world No.1 will not take part in the Australian Open lead-up event.

Serbian media outlet Blic this week revealed Djokovic would not take part in the tournament, quoting a source close to the 20-time grand slam winner which stated a “99 per cent chance” he would withdraw.

Djokovic is yet to travel to Australia, but is scheduled to begin his ATP Cup campaign against world No. 8 Casper Ruud on January 1.

TA could not reveal when Djokovic is slated to arrive in Sydney, but insisted he had not yet withdrawn from the tournament, which will already be missing fellow “Big Three” members Rafael Nadal and Roger Federer.

“No withdrawals from Team Serbia,” a TA spokesperson said.

Whether Djokovic will play at all during the Australian summer has been a source of great debate, as the world No.1 is yet to clarify whether he is vaccinated from COVID. 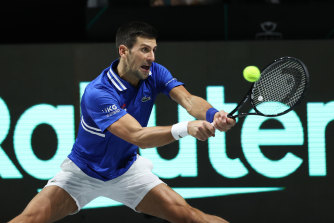 Novak Djokovic has yet to reveal his vaccination status.Credit:Getty

Djokovic believes the matter is medical and therefore private, but players are required to be fully vaccinated to take part in the Australian Open.

TA chief executive Craig Tiley revealed a handful of players would be granted medical exemptions, although the identities of those players will not be made public.

Tiley also applied no pressure on Djokovic to reveal his vaccination status when he spoke this month.

“If Novak shows up at the Australian Open, he’ll either be vaccinated or he’ll have a medical exemption,” Tiley said.

“[It’s] his choice on his medical condition, it’s his choice to keep personal and private, like all of us would do, with any condition we may or may not have. We are not going to force him or ask him to disclose that.”

The ATP claims 95 of the 100 top-ranked players are vaccinated.

Despite TA’s insistence, Djokovic’s likely absence will be a major blow to the ATP Cup, which was held in Melbourne last year due to COVID-19 restraints following a successful debut in Sydney, Brisbane and Perth two years ago.

The absence of headline stars Djokovic, Nadal, Federer and Nick Kyrgios – who didn’t qualify for one of Australia’s two slots in the tournament due to his current world ranking of 93 – leaves the likes of Daniil Medvedev, Alexander Zverev and Stefanos Tsitsipas as the star attractions for the tournament.

Tsitsipas was initially thought to be against vaccination, but has since received the jab and will take part in the Australian Open.

He shared his thoughts on Djokovic’s situation in an interview with Sky Sports on Monday.

“It is his choice – I respect it. Everyone has the freedom to decide. I will go to Australia,” Tsitsipas said.

“I don’t promote vaccination, but I’m not even against it. I support anyone who wants to do it.

“I am not a doctor, I am an athlete and my outlook may not be the best when it comes to medicine. I will be vaccinated this year. I do it to have a normal life.”