Novak Djokovic has wriggled through a loophole and into the Australian Open. That’s this year sorted, including the trophy. But what will he do next year? Contract convenient COVID-19 again?

If you don’t believe Djokovic misused an escape clause this year, have a close read of the ATAGI protocols that were co-opted to his case. The relevant clause allows an exemption for someone with “PCR-confirmed SARS-CoV-2 infection, where vaccination can be deferred until six months after the infection”. 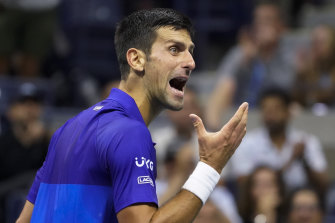 Novak Djokovic had his visa cancelled upon a rival but his legal challenge was successful.Credit:AP

That’s deferred, not refused point-blank. Deferred, not laughed in the face of. As noted by former ATAGI chair Allen Cheng, it is meant to apply to people in Australia who when safe can have the vaccine. It is not meant to provide a PPE-lined avenue into the country for those who have no intention of being inoculated, now, later or ever.

Think about it for a moment: the way to get around Australia’s COVID-19 public health protection protocols is to get COVID-19. Just head down to your local dance club, take a few deep breaths, pop into your nearest PCR shop on the way home and voila!

Does anybody truly believe that Djokovic is claiming exemption now on the basis that he will dutifully have a jab in six months when the scales fall from his eyes? That’s Novak Djokovic, globally known virulent vaccination opponent – sceptic won’t do, because his mind is not open on this. Djokovic, blithe COVID-19 fellow-traveller? Djokovic, family-anointed leader of the free world? Jab-free, that is.

It worked this year, but he’ll need a better story next year. One infection might be unlucky. Two begins to look like subterfuge. Djokovic is up to three. A grand slam awaits.

It worked this year, but he’ll need a better story next year. One infection might be unlucky. Two begins to look like subterfuge. Djokovic is up to three.

COVID-19 is such a trifle to Djokovic that the day after his latest positive PCR test was confirmed, he was photographed mixing maskless with young tennis players and at a presentation. He posted the images on his own social media. Evidently, COVID-19 is a trifle in Serbia, land of few vaccinations and many deaths.

At that level, it’s about a cultural difference. By and large, we’re appalled that they can be so cavalier. By and large, they’re scornful that we’re so precious. It lends itself to ridicule and caricature in both directions even before we get to Djokovic as Spartacus.

But the Australian Open, oddly enough, is played in Australia. Just as we would expect to be aware of and respect local custom when visiting Serbia, reciprocally we expect our due here.

Djokovic might have ticked all the boxes, but he has shown not a scintilla of goodwill. He mouths empathy with Melburnians and their sacrifices, but by barging in through a crack in the wall and giving new strength to agitators and conspiracists, he doesn’t practise it.

He and his supporters can deny it until the cows come home, but they have gamed the system. It wasn’t hard. It’s a Byzantine system, administered by officious officers officiously. The transcript of the small hours interview with Djokovic reads like a sitcom. Biggus Dickus would be in stitches. Their bungling was so clumsy that it has had the singular effect of almost turning the Victorian public to Djokovic’s side. Almost.

It infuriated the judge. “What more can this man do?” Anthony Kelly asked. It was a rhetorical question, but it was about process. It was easy to feel some sympathy for Djokovic’s treatment, not at all for his stance.

In substance, what more could he do? He could stop dissembling about how his vaccination status is his own business when it would always have emerged once he tried to set foot in the country, and everyone knew it anyway.

He could demonstrate the strength of his own anti-vax convictions by standing for them up-front, instead of shuffling around a few papers that say: well, I’m not vaccinated, no, but I could be, once this little six-month COVID-19 window passes, because I’m only deferring, wink wink, you believe me, don’t you, oh, and thanks for the visa.

He could look Australia in the eye and say that.

He could make it clear that Australia’s vaccination policy is not for him, that the Australian Open trophy and the $4.4 million prizemoney are small prices to pay to uphold his principles – he has Australian Open trophies piled high at home anyway – and he could go off and knock on the doors of the other major championship hosts, who might let him in to win an unprecedented 21st title. Someone is bound to let him in.

Or he could get the damned jab.