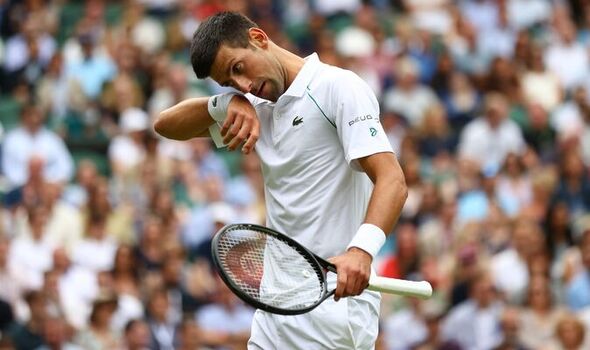 Novak Djokovic will not be playing a grass court warm-up event following his quarter-final exit from the French Open and is instead set to come straight to Wimbledon. The Serb has not been in action since losing to Rafael Nadal in Paris and will not be getting any competition in before the next Grand Slam tournament, according to his coach.

Djokovic is the defending champion at Wimbledon but, with the ATP removing ranking points, is primed to take a blow to his ranking when his 2,000 points for last year’s victory are removed. He is already set to drop to world No 3 on Monday as a result of his early exit from the French Open and could earn crucial points by competing in the grass-court warm-up events.

But the 20-time Grand Slam champion has opted to take a break in Montenegro instead, where he flew after losing to his long-time rival Nadal in the French Open quarter-final, with his coach admitting he needs time to “recover mentally” from the 6-2 4-6 6-2 7-6(4) loss. “Probably nothing (before Wimbledon). We will see more, but now is the time to recover mentally,” Goran Ivanisevic told SportKlub.

Despite Djokovic’s disappointment at failing to defend his French Open title, the retired former world No 1 claimed his charge would be ready to go in Wimbledon – where he is a six-time champion and has won the last three editions of the tournament. “As I said before, people like Novak are geniuses with a different way of thinking – they need a little time to come back and put some things together in their head, but it still takes time,” he continued.

JUST IN: Zverev told how he could have prevented horror French Open injury

“Then that is it, and even before experiencing disappointments, I know that he will be ready for the grass.” Ivanisevic has been open about the blow of Djokovic’s defeat in Paris, previously admitting he “couldn’t sleep” after watching the Serb’s negative body language on court.

Asked about the 35-year-old’s on-court demeanour during his loss to Nadal, the former Wimbledon champion told Tennis Majors: “Yes, everyone noticed. I do not know [why], we have not spoken yet. That is why I am so troubled by this match, I can’t sleep.”

Djokovic will look to make up for his disappointment at the All England Club, where he looks set to be the top seed despite dropping to world No 3.

With soon-to-be No 1 Daniil Medvedev banned from the tournament and Alexander Zverev – who will rise to the second spot in the rankings – recovering from injury surgery, the Serb is likely to be the highest-ranked man at Wimbledon.